HONESTLY: Realism in wrestling is dead and here’s why. 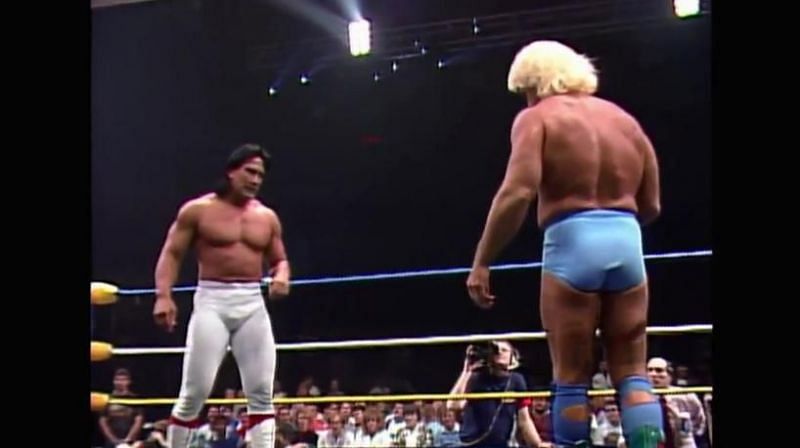 On a mainstream platform, long gone are the days where fans have a consistent emotional connection with wrestling. Why? Because REAL WRESTLING fans can’t find anything to  take seriously. Real fans sit down and watch wrestling; they don’t scroll their Instagram watching highlights of “sports entertainment” comedy sketches, terrible C movie like “cinematic” wrestling matches and acrobatic antics portrayed by no selling, talentless, high spot hungry marks. In today’s edition of “The Shoot!” I’m covering how bad writing/booking, social media, and high spot wrestling has ruined realism in wrestling.

Thinking back into my early days as a fan, when it comes to the storylines that first captivated me, two primarily come to mind; both ironically, were in the WWF/E. From 1988-1989, Hulk Hogan and “Macho Man” Randy Savage formed the most powerful alliance in wrestling known as “The Megapowers.” The World Wrestling Federation took their two top stars and teamed them together; that progressed into a bitter feud of professional and personal jealously that culminated in their main event match at WrestleMania 5. WrestleMania 5 had the highest pay-per-view buy rate for the event for years to come, and it was on the curtails of a reality-based storyline. Why was it so good? Well for one, Hulk Hogan and Randy Savage/s real life feud has been discussed and well a documented over the years. There was a rea life tension between the two as Randy Savage in real life and storyline thought that Hogan wanted his championship, his spot, and his woman, Miss Elizabeth. This was art imitating life, and man was it good. Every man could relate to the angle of someone trying to flirt with the wife or girlfriend or someone else being interested in them. Almost everyone can relate to being envious or having some professional jealousy towards a colleague. These were real emotions being played out on TV a reality-based product that drew millions.

The second, was the 1990-91 feud between Hulk Hogan and the then turncoat and Iraqi sympathizer, Sgt. Slaughter. Slaughter had returned to the WWF in the summer of 1991 and was to be positioned as the top heel in the company. The United states at the time was embroiled in the Gulf War, in opposition to Iraq.  Slaughter plagued WWF television with his anti-American, pro Iraq and Saddam Hussein rhetoric. Vince McMahon and the WWF received major backlash for the angle, so much so that he and slaughter received bomb and death threats. Slaughter has stated in interviews that the WWF even made him wear a bullet proof vest to events and tapings. McMahon doubled down on the angle, and Slaughter defeated the then WWF Champion, the Ultimate Warrior at the 1991 Royal Rumble who was draped in red white and blue attire. Enter American hero, Hulk Hogan. Hogan led the charge against the turncoat Slaughter. Slaughter would attack Hogan on and even burn a Hulk Hogan shirt on TV. Originally, The WWF suggested he burn an American flag, but Slaughter was reluctant to perform the act, so it was switched to a Hogan shirt. The feud ended with The American Hero Hogan defeating Slaughter at WrestleMania 7 for the WWF title.

These two storylines are some of my all-time favorites. Though the latter was extremely controversial, it elicited the emotion in the storylines and characters that is missing in wrestling today, the realism. I can go on with reality-based story arcs that drew fans emotionally closer to the product that not only drew money, but legitimized wrestling. The formation of the NWO, the Steve Austin, Rock, McMahon feud, Kurt Angle vs. Brock Lesnar, Ric Flair vs. Ricky Steamboat, the list goes on. All these portrayed a narrative of realism whether it be it presented a more sports based presentation like the latter or was based on actual professional envy, or written as a story that the audience can relate that has the potential of happening in their everyday lives. Since the WWF/E was taken national and then global, there has always been an element of hokey or tongue and cheek humor, but now more than ever fans laugh at wrestling or “sports entertainment” more than they appreciate it. The first contributing factor is bad writing/booking.

You need not look further than WWE RAW every Monday night that the creative in the company is lackluster at best. The other major brands within WWE, NXT and Smackdown, are seemingly better, but are still over scripted, nonsensical, and appear to have no clear direction. Creating lasting story arcs is a lost art in wrestling. Twenty-five years ago, during the attitude era, Vice Russo introduced crash TV into wrestling. Russo himself has stated that his inspiration for his writing was The Jerry Springer Show and Howard Stern. This crash TV approach was made to appeal to the instant gratification of fans which has carried over into today’s product and has poisoned their minds. Now we get constant title changes that demean the championships, bad Saturday Night Live like comedy skits that involved “wrestlers” jumping out of cakes orange juice bath matches and cinematic wrestling matches that involve teleportation and shape shifting of characters. Don’t look any further than WWE’s head of creative Bruce Prichard, who was Vince McMahon’s right had man for 25 years to blame for what’s on WWE’s TV. He is and always will be McMahon’s top stooge. On AEW’s side, it’s Chris Jericho, and the Executive Vice Presidents Cody Rhodes, Matt and Nick Jackson, and Kenny Omega. They’ve boasted how   they let talent oversee their own creative. It didn’t work in WCW and it certainly will kill the company if it continues.

Social media has done more than its part to destroy reality-based wrestling. Companies. For example, companies can’t do injury angles of any kind because everyone is posting everything, they do every day to try and stay relevant. Even when a talent is legitimately injured, promotions fail to exploit their progress and progression on social media to utilize it in a story arc. They just forget about them and a few weeks before they are set return or cleared to return, they run few promos and vignettes they debut them in a wat that is flatter than a plate full of piss. Then you have the click bate social media wrestling fans who aren’t real wrestling fans. These are the fans that fuel instant gratification narrative. They get their wresting from Instagram, snapchat, Facebook or whatever platform they can watch a 60 second clip of show and form a bullshit opinion on what they think wrestling is or should be. These phony wrestling fans are click bate marks who will never know what real wrestling is not “sport entertainment” I mean wrestling.

Lastly, but certainly not least, you have the high flying, spot hungry, talentless, no-selling marks that think what they’re doing is wrestling. There is nothing wrong with high risk maneuvers or an arial assault in wrestling, but when a talent doesn’t know how to sell what they have just done it takes the real wrestling fan out of the match. Furthermore, Constant acrobatics doesn’t belong in the wrestling ring, it belongs in the circus. Nothing takes me out of the moment of a match having to wait for two, three or sometimes even four guys on a top turnbuckle waiting 2 minutes to adjust themselves so they can fall into a crowd that looks like a feather landing on a pillow. Not to mention that these “sports entertainers” don’t know how to sell. Selling is undoubtedly a lost art. You see wrestlers pop up after taking their opponents finish after a one count. No can sell a leg injury or an arm. After taking a high-power maneuver, guys get up like nothing and retaliate. This is bad in-ring story telling that makes everything anybody does irrelevant.

It’s apparent that the major promotions, WWE in particular are so out of touch of what their fans want and don’t care what they want. Vince McMahon hates wrestling and has always wanted to be Disney or Hollywood. Now that rumors that WWE might be prepping for a sale, you better believe that no matter who buys the company WWE will become more Disney than Disney and more Marvel than Marvel; a cartoon come to life on the TV screen. AEW owner Tony Kahn has the right people around him to help him book a wrestling show However, he listens to the wrong people and sometimes Dynamite is a shit show. I don’t want to laugh at wrestling, I want to appreciate wrestling. People don’t laugh while they watch their favorite football team or a UFC fight. They appreciate the athletic competition and are emotionally invested in the team or fighters involved. It doesn’t have to be real, but it must be presented as real and in a serious manner. But instead, we get “sports entertainers” riding unicorns to the ring throwing pancakes into the crowd, mystical figures with magic powers talking to puppets and teleporting, no-selling acrobats playing wrestler, and overly scripted promos performed by people who aren’t trained professional actors but are asked to be professional actors. Millions of people watch America’s Got Talent. Why? Because the talent on the show are real and establish an emotional connection with the audience. If the product is good, people will sit down and watch it. They won’t wait to catch highlights or clips on an app. But right now, the wrestling product is not good, because it’s not real, and neither are the people portraying it because they don’t believe in it.

Thanks for reading everyone! Tell me how your wrong in the comments below because I know I’m right. I’ll kayfabe you later!