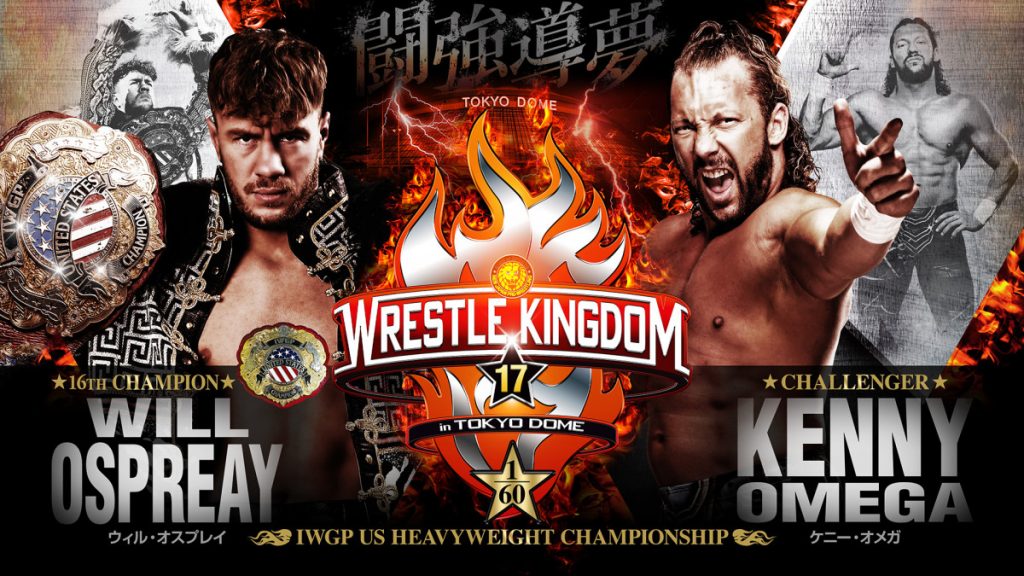 Any booking decision in wrestling is second guessed and questioned by fans and the decision by NJPW to have Kenny Omega defeat Will Ospreay at Wrestle Kingdom 17 is one of them.

Full disclosure as always, I don’t watch NJPW on a regular basis. but there are some talents there that I do keep an eye on and when I hear that there is a match I should check out, I try to do so. Will Ospreay is one of those talents that I most certainly keep an eye on. My opinion on Will Ospreay is that he an elite level performer that an argument can be made he is on par with Shawn Michaels and AJ Styles. I consider Michaels and Styles to be the GOATs of the industry as they were able to have a great match with virtually anyone and were able to be a draw as both a babyface and a heel.

Will Ospreay completely reinvented himself after proving that he was the best junior heavyweight in the world. His run in NJPW as the kingpin has been some of the best work of anyone in the industry. I wrote an article last year, talking about just how spectacular he is as a talent. Ospreay has shown tremendous loyalty as well to NJPW since he joined the promotion, he has proudly carried the flag in its expansion from just a promotion from Japan as they try to expand globally.

NJPW put a lot of effort into expanding into the States with Kenny Omega as the face of the promotion, since he was someone that spoke both English and Japanese fluently and a tremendous talent. When Omega decided to leave NJPW, they were left in a very difficult position as the person that they were planning to build the promotion around left them to help found AEW.

Ospreay was the guy to take that torch that Omega essentially threw down and built his own legacy as a main event star. Ospreay has toured the world working with talent working a ton of different styles successfully and getting himself and his opponent over having great matches.

Ospreay and Omega have had twitter exchanges where Omega belittled or questioned Ospreay’s accomplishments. This created a blurred line scenario where the fans weren’t sure whether or not it was genuine or just part of some long-term storytelling leading to a match or feud between the two. Although NJPW and AEW did not have any type of agreement to book this match, it created an interest in the match.

The heat between the two was clear as they faced each other in tag team action with Omega going over. You knew seeing the end of this match that this feud was far from over. So, as it was announced that the two would face off on NJPW’s biggest stage of the year at Wrestle Kingdom 17. It was my thought that Omega would return the favor and do the job for Ospreay.

The buildup was so well done as Ospreay delivered a promo that is the best promo of the year so far and showed the world just how good he truly is. No disrespect to Omega, but he could not deliver a promo as good as Ospreay under any circumstances and in the ring in my opinion Ospreay is better than Omega has ever been.

These men delivered in the ring, which is no surprise to anyone as these men can absolutely deliver. For NJPW, this was an ideal scenario for them to have Ospreay to go over Omega. The man that has been loyal to NJPW and picked up the pieces after Omega left and had him defeat Omega cleanly would have helped Ospreay and NJPW more than Omega going over.

However, likely politics got in the way as Omega is under a veil of protection when it comes to how he is booked. When Omega won the Impact World Championship, my first thought was there is no way he will lose the title to an Impact talent cleanly. He of course did not lose it to an Impact talent and in fact lost it to AEW talent, Christian Cage, and not cleanly.

A few days later, Omega was scheduled to defend his AAA Mega Championship on their biggest show against AEW talent, Andrade and AEW allegedly did not want Omega to lose another world title in a manner of days. Was that really the best move for AAA to have Omega retain on their biggest stage? Especially in hindsight that he never lost the title there, but instead vacated it due to injury. TV ratings wise, Omega as Impact world champion did not help them at all as I previously wrote about.

So, although Omega might be able to bring some prestige carrying the IWGP U.S. Championship on AEW TV, I don’t believe it will benefit them significantly. In my opinion, keeping the title on Ospreay and continuing the feud with Omega since both men had wins over each other. Ospreay is the star that NJPW built up for years and for them as a whole they would have benefitted more from insisting on an Ospreay win over Omega.

Having Ospreay defeat Omega for the title whether it be at AEW Forbidden Door or some other AEW show, it will be a great moment for Ospreay, but the question that they will need to answer that this was the better move than having Ospreay defeat Omega at Wrestle Kingdom. To me, having Ospreay going over would have been the smarter move in my opinion for NJPW and meant more for Ospreay than Omega. I am curious to see what comes of this booking decision, but if it doesn’t end in Ospreay defeating Omega cleanly to regain the title then it is a colossal mistake.