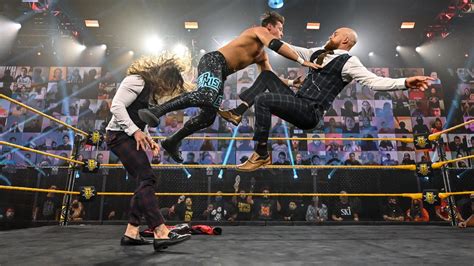 When it comes to NXT, everything on the Yellow Brand is great from their Women’s Division to their North American Championship mid-Card. However, when it comes to The constant great matches that these teams show from The Dusty Rhodes classic as well as a weekly TV it can be said that Tag Team Wrestling can’t be topped in NXT. However, there is one problem when a team becomes Champion it takes the focus off other teams until the Champions need Challengers.

For Example, Take a couple of teams like Breezeango an entertaining tag team as well as a Team that can dominate and put on performances of a lifetime. During this year’s dusty Cup Tyler Breeze and Fandango had an amazing first-round matchup against Adam Cole And Roderick Strong and yes they may have lost but I can say they had the Best First round match if not one of the best matches in the Dusty Cup as a whole. However, if this didn’t convince you then let’s switch over to a Heel Team that has been denied their time to shine for practically their whole experience in NXT the Grizzled Young Veterans.

This team has the IT factor in terms of controlling the pace inside the ring as well as emotions outside of the ring the constant times I’ve shaken my head to my screen when these men who are above the ordinary tag team scale don’t get what they deserve. Last year these men competed in the Dusty Cup running through the team after team including at that time tag champions Undisputed era only to get beaten by a Makeshift tag team that had three matches before the finals in Pete Dunne and Matt Riddle to this year’s Dusty Classic when going through challenge after challenge to get beaten by another team who had Two matches in NXT Eventually not only winning the Dusty cup but the NXT Tag Team Championships that being MSK! I do hate towards them they are amazing in the ring as well as out however they should’ve paid their dues in NXT.

Moving on to my point I know every team can’t be the champions and as for the women’s side in this, they don’t have many tag teams as well since their titles are Newer. But at the end of the day, you can’t continue to deny teams for their rightful places at the top of the tag team roster.