Honestly: Moose Is Ready To Make A Statement In This Industry 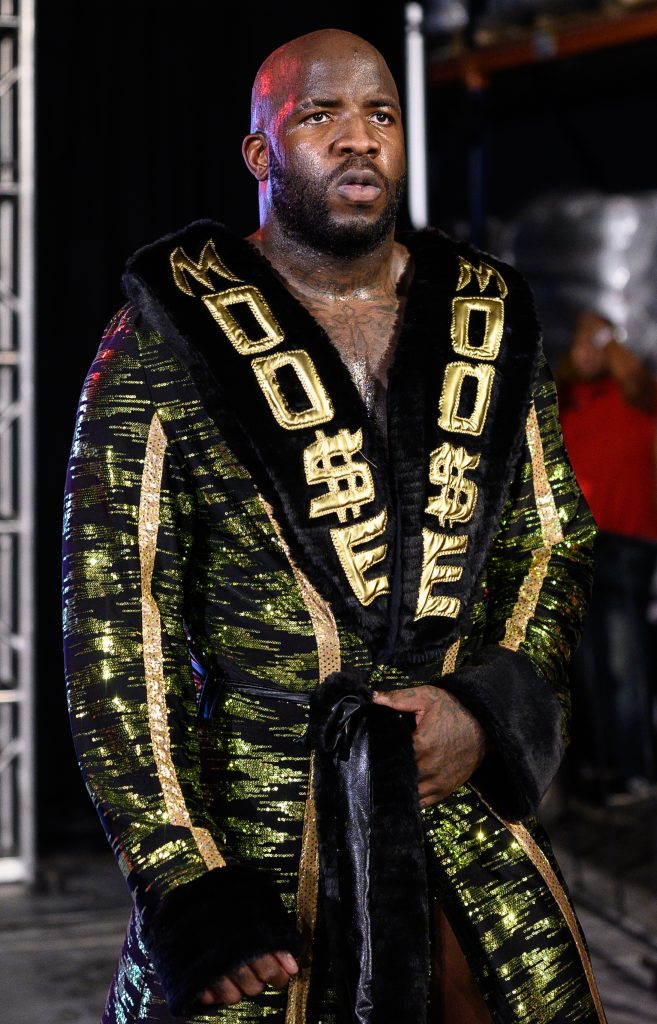 Transitioning from the world of professional football to professional wrestling has been done a number of times through the years of professional wrestling and some succeed and others fail. The key with anything in life is that you have to have the heart and desire to succeed and be willing to pay your dues. Even if you have those two things it is no guarantee of success but without those two things you stand zero chance of success in professional wrestling. Part of that desire to succeed is setting yourself apart and being able to connect with the fans whether that be as a babyface that they cheer and get behind or as a heel that they hate. Professional athletes that join the wrestling business need to understand just because you have had success in let’s say the NFL that doesn’t mean you are going to just going to be given the top spot and that everything needs to be earned.

Moose understood this and was ready, willing and certainly able to pursue the top spot in the business. He was trained by Mr. Hughes in 2012 and was eventually signed by ROH in 2014. Although, he would spend two years there, he would not hold any championship but he made enough of an impression to gain the interest of WWE and TNA Wrestling. Moose would end up signing with TNA.

In July 2016, he would debut and aid fellow ROH Alum, Mike Bennett but eventually he would turn on Bennett. Over the next year, Moose would feud with Bennett, EC3, Eddie Edwards, Aron Stevens, Drew Galloway (WWE’s McIntyre) and Cody Rhodes. He would hold the TNA Grand Championship and would proceed to feud with Davey Richards, Eli Drake, Tommy Dreamer, The Rascalz, Johnny Impact (WWE’s John Morrison) and a variety of other performers over the next few years. He would challenge Austin Aires for the Impact World Championship at Slammiversary 2018 and Impact put together this great retrospective video on him:

Over the four years, Moose was in Impact/TNA, he would never grab the brass ring and he decided to just take it. In April 2020, Moose suddenly declared himself the TNA World Heavyweight Champion, despite the fact that the championship was retired in 2017 when TNA rebranded itself Impact Wrestling. Despite this fact, Moose would go on and carry and defend this unofficial world championship. In many ways this reminded me of when WWE HOFamer, Hacksaw Jim Duggan was in WCW and found the WCW TV title in the trash after the reigning champion Scott Hall literally threw the title away declaring it worthless and Duggan began carrying it and declaring himself champion. It is is also similar to when Taz declared himself FTW Champion in ECW or the FTW title in AEW today.

This run truly showed that Moose could be a great heel champion, regardless of whether or not the title was officially sanctioned or not. It was clear that Moose truly believed himself to be the real world’s champion in not only TNA but in the business. What truly cemented this run was a rival from his past would arrive and truly test Moose. Recently WWE released talent and former legitimate TNA World Champion, EC3, would return to Impact and attack and being a long feud with Moose.

This feud would really open a lot of fans eyes on Moose being a legitimate top guy in the business. Moose would win the feud but would eventually face the reigning Impact World Champion, Rich Swann in a title vs title unification match that Moose would lose. Moose would scratch and crawl back into the title picture and at Bound for Glory 2021, Moose would go on and win the Call Your Shot Battle Royal. For those of you that don’t know, the concept of the match is if the Royal Rumble and the Money In The Bank Ladder match had a child. Essentially the winner of the battle royal can challenge any champion in Impact for their title at any time.

In the most dastardly heel move of the year, after Josh Alexander sacrificed his X-Division Championship in order to face AEW’s Christian Cage for the Impact World Championship in a grueling match and coming out on top and while he was celebrating with his wife and young son in the ring, Moose decided to cash in. He immediately hit Josh with a spear and pinned him while Josh’s wife and son were still in the ring. Moose stole the Impact World Championship in without a doubt one of if not the best heel moves of the year and without a doubt one of the best cash ins of all time. If that wasn’t a statement enough, on that next Impact, he would send more shockwaves in the industry by way of a great promo:

Moose took shots at AEW’s Kenny Omega (AEW World Champion), WWE’s Roman Reigns (WWE Universal Champion), Big E. (WWE Champion), Charlotte Flair (WWE SD Women’s Champion), Becky Lynch (WWE Raw Women’s Champion) & Sasha Banks. Moose not only declared himself the definitive world champion but the best professional wrestler in the world. Between what he did at BFG and this promo, he is truly setting himself up for success as the roster of Impact all want a piece of him especially Josh Alexander. Impact wants to make a statement that they aren’t a dead promotion and having Moose as their heel champion is certainly the right move to make as Moose vs Josh Alexander should be an amazing feud.

As we close out 2021, the future of Impact and Moose’s career are certainly very interesting as we move forward and I for one look forward to the rest of this year and beyond to see what Moose and Impact are going to do going forward.