Honestly: MJF vs Darby – Is Probably The Most Compelling Story Going Into AEW Full Gear 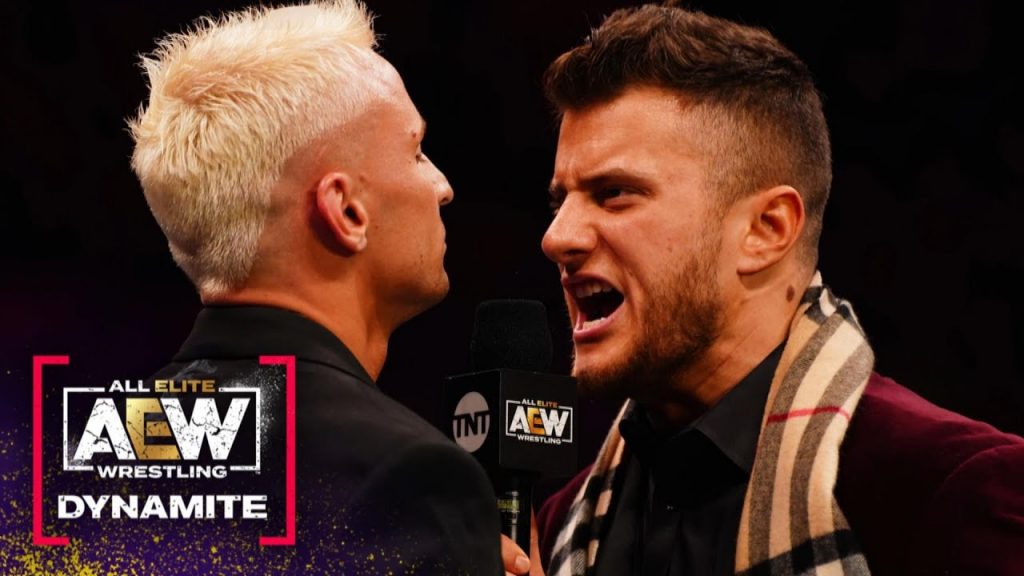 I know there may be a lot of you out there thinking, “oh he’s nuts or doesn’t know what he is talking about” to think Omega vs Hangman isn’t the most compelling match but the thing is these things aren’t facts they are subjective opinions. The Omega vs Hangman and the long held belief that Hangman would be the one to dethrone Omega has been talked about for months so unless AEW pulls some kind of swerve the ending is pretty much spoiled that Hangman will take the gold. I’m not saying that the story and the eventual match won’t be great but that isn’t the match that compels me the most on the card mainly because like I said the ending is kind of already known if it ends the way many of us expect it to end. The Darby vs MJF match is really unknown who will come out on top and since this feud started a little more than a month ago it grabbed my and a lot of fans attentions and has held it since that MJF promo:

MJF is probably the best guy on the mic in AEW and one of if not the best on the mic today in the business. MJF has been compared to Roddy Piper on the mic and although there will never be another Roddy Piper, in a lot of ways I can see that Roddy was clearly someone that MJF modeled his promo style from whether intentionally or not. Like Roddy, MJF can be very controversial on the mic and in my opinion it is his greatest asset in being a heel. Being able to verbally teardown your opponent and evoke that emotion from the crowd to hate your guts and forget that it is a performance is truly a gift.

As a long time wrestling fan it is unfortunately common at times where you feel a story just doesn’t connect whether it is a rehash story or doesn’t make sense and that ruins the story for you. We know that these guys are playing a part and the results are predetermined but we want for the performance to draw us in and make us care about the story. This promo by MJF was absolutely one of those promos that made you care about the story before you even knew what story he was trying to tell.

MJF was completely right that if you are looking at the pillars of young talent that AEW’s foundation and future is and should be built on since its launch you cannot name 4 better talents than Jungle Boy, Sammy Guevara, Darby Allin and MJF. Personally, I had seen Sammy, MJF and Darby prior to their AEW runs at Wrestle Circus, Evolve and MLW and remember thinking these guys are going to be truly special one day when they progress and are seen by a global audience. Jungle Boy was the only one that I wasn’t really familiar with prior to AEW’s launch but I had heard of him.

MJF reluctantly admitting that these other men are talented was a great heel move and him dismissing Sammy and Jungle Boy as men he has already beaten and skimmed over Darby because he didn’t hold a victory over him was brilliant and the first indication that Darby vs MJF was the direction that this promo was looking to accomplish. MJF throwing out the possibility that he would consider jumping to the WWE and that AEW would lose one of it’s pillars was designed to anger the die hard AEW loyalist fans that believe in the Us vs Them war that has been stirred up since AEW’s launch.

The wink and nod to the fans that follow the behind the scenes information just as much as the stuff we see on TV was certainly there. As MJF never mentioned the WWE name but made a point of saying he has a friend from his MLW days named Bruce Pritchard, who is an Executive Producer of WWE. This of course would bring Darby out to confront MJF and declare that his loyalty will always be to AEW and MJF is welcome to leave.

Darby throwing his dig that he is the only one between the two of them to have actually won gold in AEW making him superior to MJF was a nice shot. Technically, MJF won the Dynamite Diamond rings twice and were treated as a big deal and this shot by Darby essentially said they aren’t real accomplishments or titles.

When confronted with this reality that maybe he isn’t the most accomplished and there go not the most important pillar of core 4, MJF did what any great heel and went really low with his rebuttal. MJF pointed out to the audience that you know why Darby is straight edge don’t you and proceeded to divulge that its because he was in the car as a child with his drunk uncle and they got into a car accident that took his life and if that wasn’t bad enough he said it should have been Darby that died that day. Needless to say that is a really dark and controversial thing to say to somebody. My guess is that was probably discussed beforehand and given Darby’s blessing but then again maybe he didn’t know. Either way it was a promo that absolutely got your complete attention.

MJF is used to getting his way on the mic by playing mind games and making his opponents react out of anger and emotion. It is smart because if they are just reacting out of emotion they aren’t thinking and you can take advantage of them as they make mistakes because rage instead of logic is guiding them. However, Darby no sold it and MJF didn’t know how to react and just ran away when Darby said MJF could not break him. MJF literally hit him with a verbal nuclear bomb and it had no affect on Darby.

MJF and his associates in the Pinnacle would eventually dawn masks and jump Darby in the back with the hope if mentally he couldn’t break him then maybe physically he could do it. Well the old adage what doesn’t kill me makes me stronger applies here as Darby would return and the feud was far from over.

On the November 2, 2021, episode of Dynamite, the feud would hit up even further between these men and made this match and feud perhaps the most heated match on the card. As the men finally came to blows through the crowd and honestly makes me hope they with make this match or they eventually have a no holds barred or falls count anywhere match between these two men.

Let me say this was one of the most dangerous yet perfectly executed spots and incredibly well shot by AEW or anyone else in wrestling for that matter. So many things could have gone wrong and ended in a serious injury but it is definitely a highlight reel shot for this feud. Personally, this is a feud that should be allowed to drag out over multiple matches because these men have absolute chemistry together and could reach Gargano/Ciampa or Steen/El Generico levels of whenever they face each other they paint a masterpiece in the ring. Ideally, I think this feud should end in either a Last Man Standing or perhaps an I Quit match because this feud could definitely escalate and maintain a compelling and interesting enough of a rivalry to dictate a truly violent finale. It would be a huge mistake in my opinion for this to be a one and done match in this feud.

As wrestling fans this is the type of feud that you know is going to special and it is must see. This is one of the best built feuds that AEW has put together and they are two polar opposites and that just makes this work on so many levels. MJF will always be the most hated man no matter what company he works for and Darby is the constant misfit underdog that the crowd loves. Chemistry between opponents cannot really be faked and there is no question in my mind that these men bring the best out of each other and this can be something really really special at Full Gear and hopefully beyond.