Honestly: Live Events aren’t drawing better numbers because nothing ever happens at them. 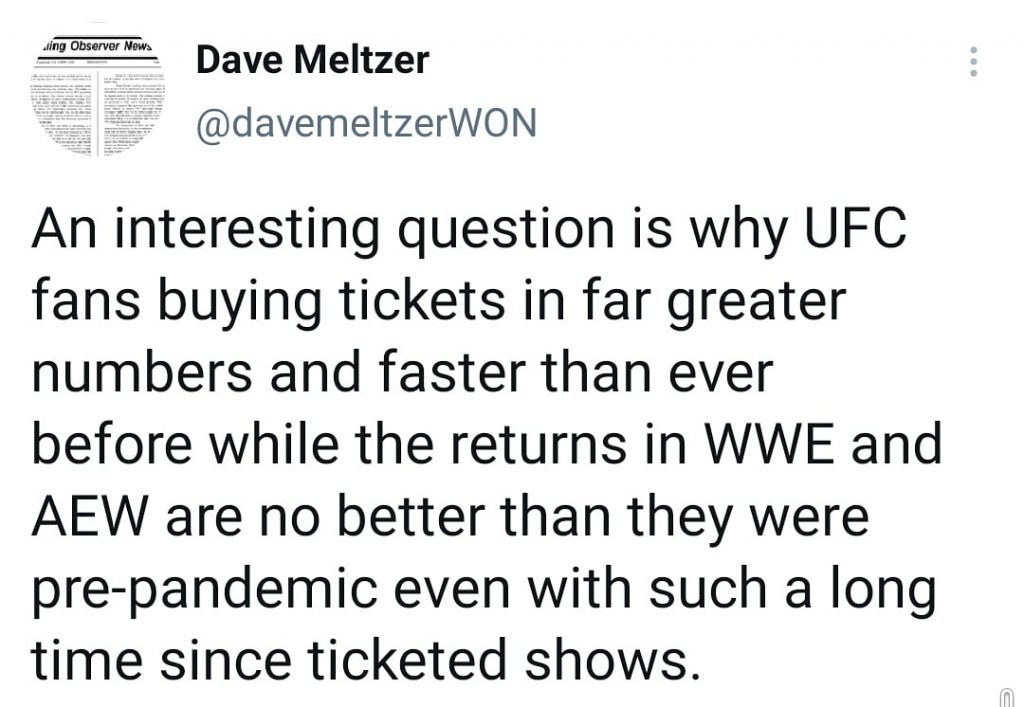 In a recent tweet, Dave Meltzer made a statement about how the UFC shows are selling tickets in far greater numbers and faster than ever before whilst WWE & AEW are no better at selling tickets than before the pandemic.

Admittedly, I don’t watch UFC, so I can’t speak in great detail about UFC and I have a very vague idea of the current product and top drawing attractions. But as a Wrestling fan, I can speak why Wrestling isn’t selling live event tickets like the UFC are.

Firstly, no one thinks anything can happen in their area anymore when a live event is advertised. Since Ted Turner bought Jim Crockett Promotions, the house show concept has been abused. It’s incredibly rare to see an angle or title change play out at a house show because they’ve focused on just doing everything live on TV and as a result the house show business has been slowly dying unless a Hulk Hogan, Steve Austin or Rock pops up, three stars that were bigger than the promotion. How many times in the past decade has a title change or big angle happened at a house show? Maybe 4 or 5 times? If so, it’s not like it’s memorable and something that changed business and peaked crowd interests like Ric Flair and the Anderson’s breaking Dusty Rhodes ankle in the cage or Michael Hayes blinding The Junkyard Dog. The lack of moments that has happened at house shows has made it so that the house shows are seen as nothing shows and the TV is where everything happens when in the 80s and before, when the house show business was booming through out, it was seen as the opposite. So instead, whilst the house shows are usually more fun to attend, no one will buy a ticket to see one because they don’t believe anything will happen and very few people feel like going to a live TV event, especially after they’ve been to one, because it’s full of stops and starts and less action.

Secondly, no one promotes a live event on TV anymore. You don’t see Roman Reigns on TV promote a match or card at a live event in an interview do you? Now admittedly it’s not like you can do local promos, I understand that, but you can still promote live event matches and cards on national television. So in turn, people in the area you are promoting will go and buy a ticket to see the match you’ve been hyping up on telivision. Now you’ll probably answer back to this “what about the PPVs” well my answer to that would be, do less PPVs. Especially now you’re on peacock and the majority of your income comes from TV, you don’t need to do “PPVs” every month anymore.

Furthermore, no big matches get blown off at house shows anymore. I’m not saying blow off all or even most of your matches off at house shows, but at least have some balance to put some importance to non televised events. Do something of a Jim Crockett Promotions format in the late 80s, where you’d blow off let’s say Lex Luger Vs Dusty Rhodes at Starrcade, but blow off Dusty Rhodes Vs Big Bubba Rogers at an untelevised event in Pittsburgh that drew 17 thousand people and a gate of 160 grand, which was a record, or the Nakita Koloff Vs Magnum TA best out of 7 series which was more or less a house show exclusive. Nobody will want to buy a ticket to see Bobby Lashley Vs Drew McIntyre live when we’ve already saw them have a full match with a decisive finish numerous times on TV for no additional cost. Would The Midnight Express W/Jim Cornette Vs Rock N Roll Express have set records all over the Mid South territory if they would have saw them fight numerous, full matches on TV with decisive finishes? Speaking of Mid South Wrestling, they had one of the best balances of doing big angles and matches on TV aswell as the live arenas. For example you’d see Ted Debiase’s face turn against Ric Flair in November of 1985 on TV, but Mr Wrestling 2 turning on Magnum TA in 1984 happened at a house show. Striking that balance made Mid South Wrestling highly watched on TV within the territory aswell as mostly consistent in getting people in the arenas until about 1986 when it went National.

Additionally, to go back to the point of Austin, Rock, Hogan and Cena, drew because they were bigger than the promotion. When they were on the card nobody went to see the WWE, they went to see them. Now Vince, with this Disney on Tour gimmick he has created, has marketed the WWE that’s it’s “the WWE coming to an area near you” instead of “Bobby Lashley coming to an area near you”. Here is an exact quote from toyotacenter.com in the event info section for a live WWE Smackdown event you can attend in Houston “WWE is returning to the road and will start at Toyota Center with Friday Night SmackDown on July 16! This marks the first-ever Friday Night SmackDown on Fox in Houston! Don’t miss all of your favorite WWE stars as they return to the road for the first time in over a year! WWE is back in Houston this July!” Not once does it mention certain Wrestlers, it’s just “WWE on tour”, it vaguely talks about “WWE stars” once. Very few people will go to see a promotion apart from the hardcore fanbase. People go to see exciting Wrestlers involved in big storyline’s. Did 30 thousand people go to the Superdome to see Mid South Wrestling or did they go to see The Junkyard Dog face Michael Hayes? Which goes nicely to my next point….

There are very few Wrestlers and zero storyline’s in current Wrestling that would make me buy a ticket to a show. As a somewhat casual viewer of modern Wrestling, I watch the shows to see the matches that perk my interest, I don’t watch it to help the brand. There are very good Wrestlers out there currently, but they’re in bad storyline’s with no heat. Even somebody like Roman Reigns, who seems to be doing a lot of good when he’s on TV, I wouldn’t go to see because then I’d also have to watch everyone else who’s in a stupid storyline with no heat. Maybe more people watch the UFC because there’s far less a normal person would roll their eyes at. Look at Logan Paul Vs Floyd Mayweather in Boxing for example and how big that is, the story between the two has heat and every day people don’t roll their eyes at it when it happens because there isn’t a guy teleporting round the arena or a guy swinging someone round by his appendage. There are very few top drawing attractions in Wrestling and zero stories that somebody would buy a ticket to see the ultimate blow off. Let’s look at AEW, they are doing financially well, but their shows are attended only by a hardcore fanbase, which is their current audience. The biggest indicator of this is when the fans chant “AEW” every 10 seconds instead of the name of the Wrestler. Another indicator is how AEW was doing in the South in attendance compared to the areas were a lot of the smart fans are like Philadelphia. Those fans don’t go to see those shows to support a certain Wrestler, they do it to support a brand.

Now here comes the part where you choose your business model. The Wrestling business has changed, I don’t mean the style or the way it is produced, but the actual business side. Live event gates are more or less irrelevant to wether WWE or AEW survives. This is because the biggest way for both of them to get income by far is TV deals and advertising revenue. Infact, if I remember correctly, the WWE were losing less money during lockdown due to the fact they weren’t going to arenas anymore, doing shows in live arenas has now become a money loser for the WWE. They don’t need to focus on house shows doing well because house shows are basically irrelevant to wether the WWE or AEW does well or not, so in turn they don’t put any effort into them and do everything on TV because why wouldn’t they? So the choice is for WWE or AEW if they are so desperate to get live event attendance and gates up, do they consist on with their current model of being totally TV centric or do they get away from that more and start taking care of their house shows?