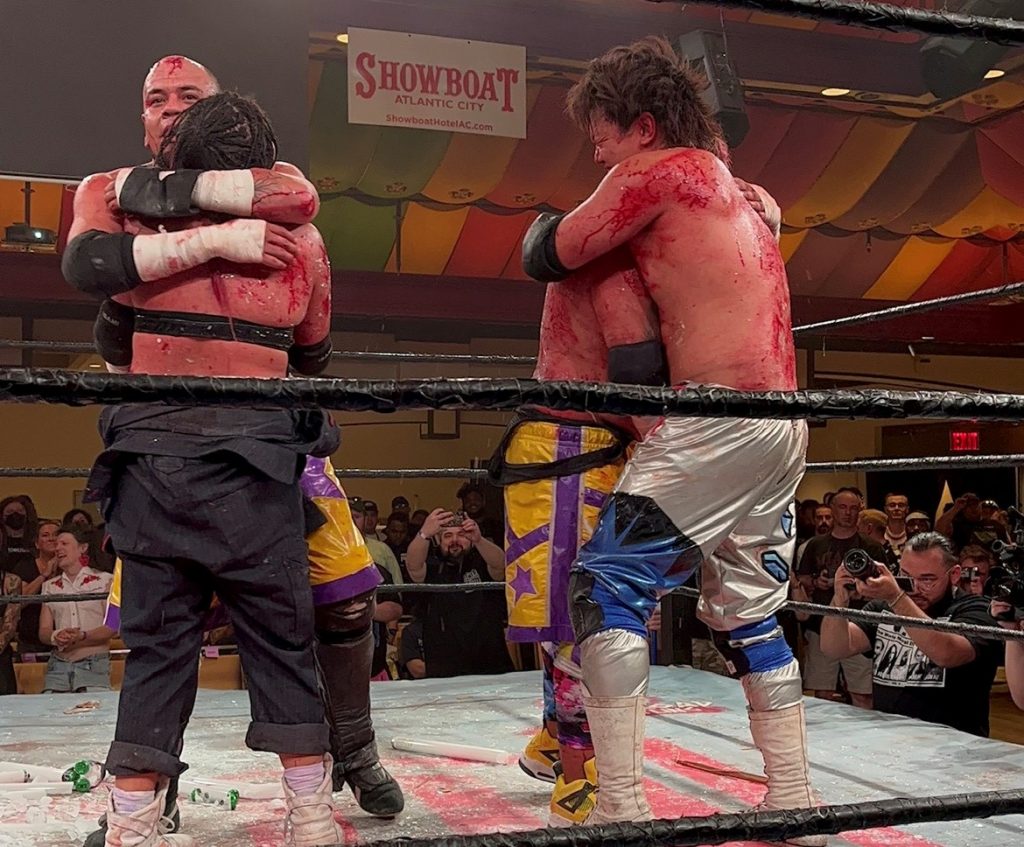 Kings Road Wrestling’s take on the best deathmatch of the month…so far.

We are only 16 days into June and deathmatch fans may have just seen the best match of the month. During Game Changer Wrestling’s Cage of Survival, fans were treated with an international deathmatch between Los Macizos (Miedo Extremo & Ciclope) facing off against Rina Yamashita & Toru Sugiura. Los Macizos had been away from GCW for over 4 years due to international travel restrictions stemming from the global pandemic. The fans went wild when they entered the Showboat’s Carousel room, in an ultimate sign of respect. Yamashita & Sugiura have dominated the deathmatch scene in Japan, in the Pro Wrestling FREEDOMS promotion. The match immediately started off hot, with multiple exchanges of fluorescent light tubes.

Laying It All On The Line

The match progressed perfectly as the teams were able to combine their unique styles of lucha & strong style deathmatch wrestling. Things heated up even more when Ciclope dove out of the ring straight into Sugiura who was holding a bundle of light tubes. The match was simply insane, with so much action going on at once, it was almost impossible to focus! Each team fought back and forth for the advantage as they smashed and slammed each other with light tubes. All four competitors were extremely bloody by the middle of the match, as hundreds of pieces of broken glass filled the ring.

A Once In A Lifetime Experience

Towards the end of the match, Ciclope was able to take out Toru Sugiura with a steel chair, allowing Miedo Extremo to isolate Rina Yamashita. Miedo then picked up Yamashita and dropped her head first onto a massive bundle of light tubes. Miedo then got the pin fall victory. The crowd erupted in one of the loudest chants I have seen in the Showboat. Fans definitely showed their respect to all four competitors who had just put everything on the line for their entertainment. The match was truly special because it showcased the variations in deathmatch wrestling styles through four international stars. By the end of the match, it felt like the experience was truly once in a lifetime. The four competitors then embraced and took flat back bumps off the top rope into the broken glass! This was absolutely insane. If you would like to watch the match, the full GCW Cage of Survival Replay is available for purchase on FITE TV.