Honestly: Kyle O’Reilly is not ready to become NXT champion 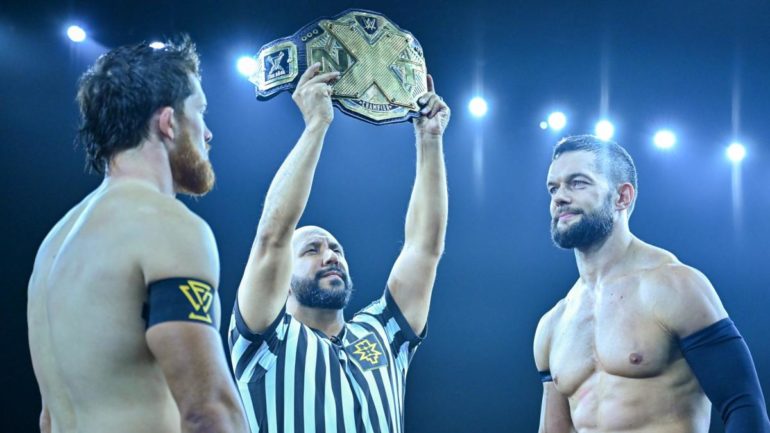 Kyle O’ Reilly is easily one of the greatest technical wrestlers not just on the NXT brand, but on the entire WWE roster. He became a breakout star as a member of the Undisputed Era, showing off a cocky, charismatic side that was never seen before from him. However, when he broke away from Adam Cole and the rest of the Era, something has just felt off about him ever since. Kyle certainly comes across as a main event talent on the black and gold brand, but he doesn’t feel big enough to win the NXT title just yet. Why is that the case? Let’s take a look.

It can easily be argued that the Undisputed Era are the greatest tag team champions in NXT history. With so many classic bouts against teams like Moustache Mountain, the War Raiders (now Viking Raiders) and the Broserweights, the UE have shown why they dominated the NXT tag division for the better part of three years. On top of that, whether it be with Bobby Fish, Roderick Strong or even Adam Cole, Kyle O’ Reilly is always seen representing the UE in the tag division, famously strumming his NXT tag team championship like a guitar. It’s an image that is synonymous with Kyle O’Reilly’s NXT run. Because of this, it’s very hard to see Kyle as an established singles competitor so soon after the breakup of the Era. Take for example, when Pete Dunne and Oney Lorcan beat down Kyle a few weeks ago. Who saved him? Bobby Fish, his former tag team partner. While the aftermath served as a nice symbol for Kyle to seemingly let go of his past as a tag wrestler and move on to bigger things, a lot of people couldn’t help themselves to be hyped at the prospect of a potential ReDragon reunion. Kyle is still way too new as a singles wrestler to be seen as a potential challenger that could usurp Kross and carry the brand.

HIS OBSESSION WITH ADAM COLE

Another important aspect of Kyle’s character arc right now is that, as mentioned earlier, Kyle is still clinging to his past in a lot of respects. While he was able to seemingly move past being a tag wrestler, he still carries a monkey on his back that continues to haunt him. That monkey is Adam Cole. While Kyle was successful in defeating Cole at Takeover: Stand and Deliver, he wasn’t able to fully get rid of him. He wasn’t able to actually move past him. The cool Kyle persona we saw post takeover was nothing more than a cover for his false sense of a new found confidence. Once Cole came back, the cool Kyle demeanor faded and he went right back into being hell bent on ending Cole. When Cole said on tonight’s episode of NXT that Kyle is obsessed with him, he’s right. Cole is clearly focused on winning back the NXT championship and becoming the face of the brand once again. O’Reilly is not necessarily focused on becoming NXT champion, but rather making sure that Cole doesn’t.

Since Kyle is a relatively new face in the singles division of NXT, it’s a bit soon for him to sniff the NXT championship over guys like Pete Dunne and Johnny Gargano. However, it would be more beneficial for Kyle to have a lower starting point and work his way up to the NXT championship. For example, Kyle confronting the NXT Cruiserweight champion KUSHIDA led to a fantastic match between the two with Kyle emerging victorious. Kyle butting heads with the cruiserweight champion came off as rather odd considering he was just in the main event scene, however the prospect of Kyle challenging for the Cruiserweight title is actually very interesting. With the unfortunate news of several 205 Live talents being released earlier this week, why not turn a negative into a positive and rebuild the brand? Why not have Kyle be a major player to help create a new and improved cruiserweight division? Kyle by this point is certainly a big enough name that would get some eyes on the 205 product. I would love to see more matches between Kyle and KUSHIDA and the idea of Kyle as cruiserweight champion is a very interesting first step for Kyle as a new singles competitor.

Finally, the biggest reason why I feel Kyle O’Reilly isn’t ready to become NXT Champion is that he isn’t the most convincing face. As I mentioned earlier, Kyle’s best work in the Undisputed Era was when the group was a predominantly heel faction. He had this cocky swagger to him during his entrance and his promo cadence made him come across as a wisecracking smartass. However, once Kyle broke away from the Era and began his singles career, his cocky swagger and goofy antics didn’t translate well into making him a main event star capable of becoming NXT champion. His attempts at “cool Kyle”, while highly enjoyable, came across as a tad too goofy for someone who wanted to become NXT champion. With that being said though, I’d argue his promos have become progressively less and less effective since dropping said cocky demeanor. His promos come across as the generic, bland babyface style of talking. His cadence is very monotone and it feels as though he’s reading from a script as opposed to saying what’s in his heart. There’s no intensity to a lot of what Kyle says and I’m afraid that might really hurt Kyle long term. On top of that, in terms of promos Kyle has been absolutely outclassed by Adam Cole during this feud. While it’s unfair to compare anybody to Adam Cole in terms of promo ability because Adam Cole is so good, their respective promos during this feud have come off as night and day in terms of overall quality. I feel Kyle has the ability to cut a great promo. He’s done it before and is absolutely capable of doing it again. However, something seems missing for it to be perfect. A mix of his classic cocky demeanor mixed with a new found intensity to his voice I feel will make Kyle’s promos improve significantly.

Kyle O’ Reilly is in a league of his own when it comes to in ring ability. He has all the tools to eventually become NXT champion. However, in his current state I feel Kyle still has a journey of self discovery ahead of him to figure out what will take him there. Kyle is still a relatively new face to the NXT singles division, let alone the NXT championship picture. On top of that, Kyle is still too focused on his past to look to the future. Until he moves past Cole and, subsequently, his involvement with the Undisputed Era, Kyle will always be seen as the tag wrestler from the UE. Kyle needs to establish a clear identity far away from the Era before becoming ready for the NXT title. A brief stint in the midcard or even the cruiserweight division would benefit Kyle greatly going forward. Kyle’s face promos also are in need of some fine tuning because at the moment they come off as a bit too generic and bland for a main event level talent. A move down the card would greatly benefit Kyle in tuning his promo skills as well. Kyle O’Reilly has all the tools to eventually become NXT champion. However, he won’t be able to effectively achieve that goal until he figures out who the new Kyle O’Reilly is.