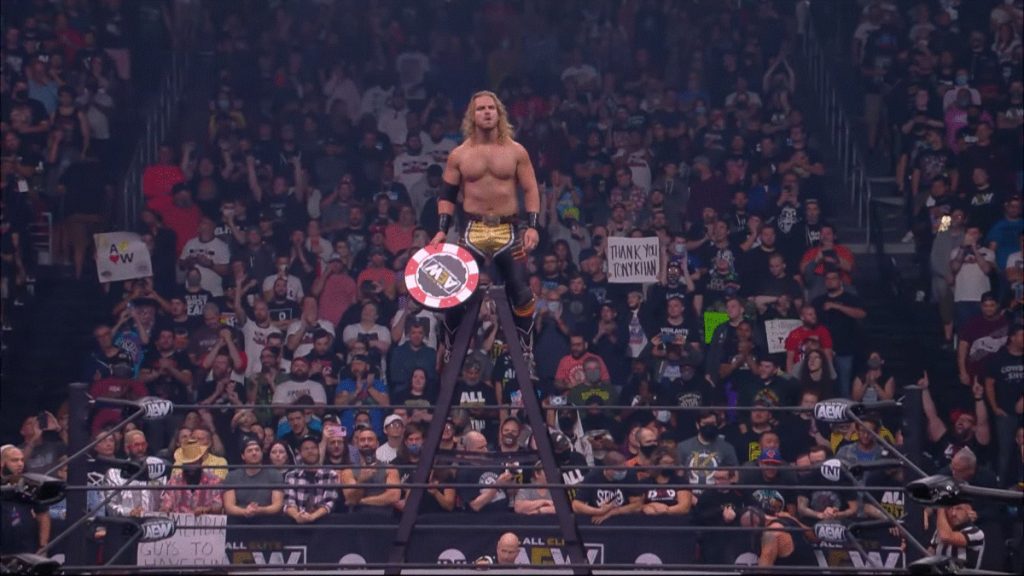 This past Wednesday on Dynamite Hangman Adam Page made his return to AEW as the joker of the casino ladder match. In typical big return fashion, Page was victorious and now holds a future title opportunity against Kenny Omega. While the prospect of Adam Page defeating Kenny Omega ran rampant over the summer, it isn’t as pleasing to think about now. The landscape of AEW has changed drastically since the quick departure of Adam Page. Time will tell if it’s for the worse or for the better, but as of right now the new faces in AEW create more intrigue towards the championship chase than Hangman does.

Throughout the time that Hangman has been on hiatus, there have been a couple of new faces that have emerged in AEW. CM Punk, Adam Cole, and Bryan Danielson have all found themselves in All Elite Wrestling creating more compelling scenarios to think about when it comes to Kenny Omega losing his championship. One of the fantasies turned into a non-title reality when Kenny Omega and Bryan Danielson engaged in an instant classic at Grand Slam. It was a match so nice that it left fans everywhere clamoring for more.

With the fantasies being limitless, Hangman Adam Page defeating Kenny Omega is the least compelling of the options. There’s still room for another Omega/Danielson matchup which feels like is getting built up. What about the prospect of a full circle story to tell at All Out 2022? One year after returning to professional wrestling in his hometown, CM Punk is back in Chicago and defeats Kenny Omega in his hometown to culminate the anniversary. Last but not least, how about Adam Cole rebelling against Kenny Omega to take the championship? For me, all of these fantasy scenarios are more compelling than picturing Hangman Page defeat Kenny Omega. Sure, it’s nice to have Hangman back. It’ll be even more nice seeing the match take place. But Hangman should not defeat Kenny Omega. The change of the landscape of AEW has created plenty more intriguing options than Hangman being the one.