Honestly: Fans, we have to accept that wrestling was successful before the WWF/E. 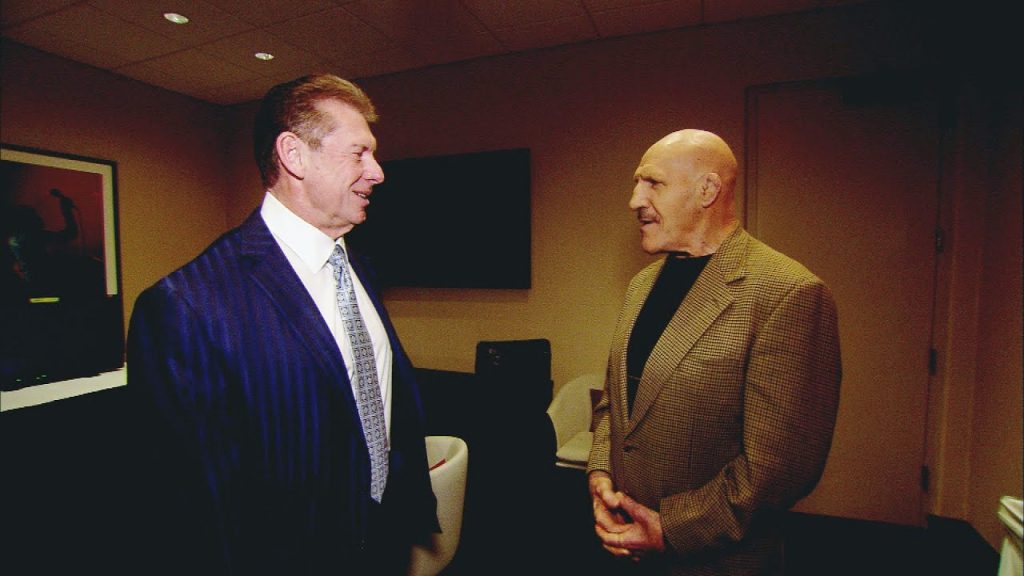 There was a really fun behind the scenes photo of both Vince McMahon and Hulk Hogan, during the 2002 nWo invasion storyline, post on one of the many Instagram fan accounts that feature wrestling content. The picture was a moment captured during preparation for a RAW segment, where the nWo and Hogan jumped the shark drive a semi truck through an ambulance, containing a helpless Dwayne “The Rock” Johnson. Beneath the picture, a comment stated: The two men responsible for turning wrasslin into Wrestling. Respect.

The current professional wrestling landscape is as strikingly complex, as the fan base that keeps it alive and successful. The era of Kayfabe is long gone, and replaced with a pseudo realism, where smart fans “know” what’s going on, but often scramble in the direction of “its a shoot” and uncertainty, whenever something appears “off,” from what they think they know. Years of the business being overexposed from the expansion of the internet, along with fans now having access to so much information about the business, have educated the audience to a certain level of expectation and understanding. The irony is, this same access to information seems to be ignored in the name of gatekeeping amongst the legions of today’s Wrestling Fans.

Now, I’m a sucker for the classic WWF/E product. Everything from Hogan, all the way up to CM Punk’s Pipebomb era. I love the atmosphere of the 80s crowds, the ravenous violence of the 90s era, and the transitional period which is the mid 2000s to early 2010s. But, there seems to be a built in filter for wrestling fans who choose to cap off periods of success, in the name of their own preferences. There’s nothing wrong with your interest in the sport starting at a certain point in time. My love for wrestling started with Undertaker in his very early Mortuary gimmick, but has since grown into a love for everything that was the controversial DX Black face segment, all the way back to seeing Lou Thesz showcase his grappling and submission abilities in the 1950s. Wrestling in the 1950s? Shocked?

I hate to break it to you, but there was a VERY successful world of Pro Wrestling, before Undertaker, Wrestlemania and Hogan sold us action figures and ice creams bars.

There’s a well shared, and biased belief, that Vince McMahon pulled wrestling from the “hillbilly” close-mindedness of the Southern territories, into a more cartoonish successful entity, that is known across the world as “Wrestling.” We dismiss the Bruno Sammartino reign as the biggest draw of Pro Wrestling in Madison Square Garden. We ignore the successful gates and matches of Lou Thesz vs Nature Boy Buddy Rogers, and the almost mythical impact of Rikidozan in Japan, long before the creation of Giant Baba and Antonio Inoki’s All Japan and New Japan takeover.

Let’s not downplay the importance of El Santo within the Lucha Libre culture, that led to a series of beloved films in Mexico – far before Vince’s attempts at WWE Studios. Santo’s legendary career in Lucha saw him win numerous titles recognized by the NWA, reaching the level of folk hero within Mexican culture. A success and cultural impact, not created by the business and brain trust of WWE.

The World Heavyweight Championship of Pro Wrestling, at a time was one of the most financially successful positions in sports during the 50s, amidst traditional outlets like Basketball, Football and Baseball. Crossover impact included movie appearances for varying wrestlers, newspaper coverage and Magazine covers. The advent of Television only added to the expansion of the sport’s visibility, and this was decades before Hogan was even found by Gerald Brisco, during his days as a Bass Player in a Rock band. Wrestling has always thrived, before McMahon decided to give it a fresh coat of Sports Entertainment.

The internet and the current era of wrestling offers so much in variety of styles and fanbases. We no longer have the physical almanacs, magazine issues and publication specials, filled with rich, factual history and columns of opinionated takeaways. Facts are now subject to preference, and observations are ignored if it challenges our beloved, personal getaways. We’re in the era of Top 10 lists, an overpopulated podcast industry, and fan accounts that have now become “news” sources, and inflated opinions that are now the mark gospel of the culture. Fun times.

No matter what though, we have to respect that this thing called wrestling was long successful, before it was turned into a cartoon.

Been a wrestling fan for 30 years. I try my best to mix my writing with landscape references for of time period, to give better insight for the discussion. I'm a filmmaker, photographer and figure collector.