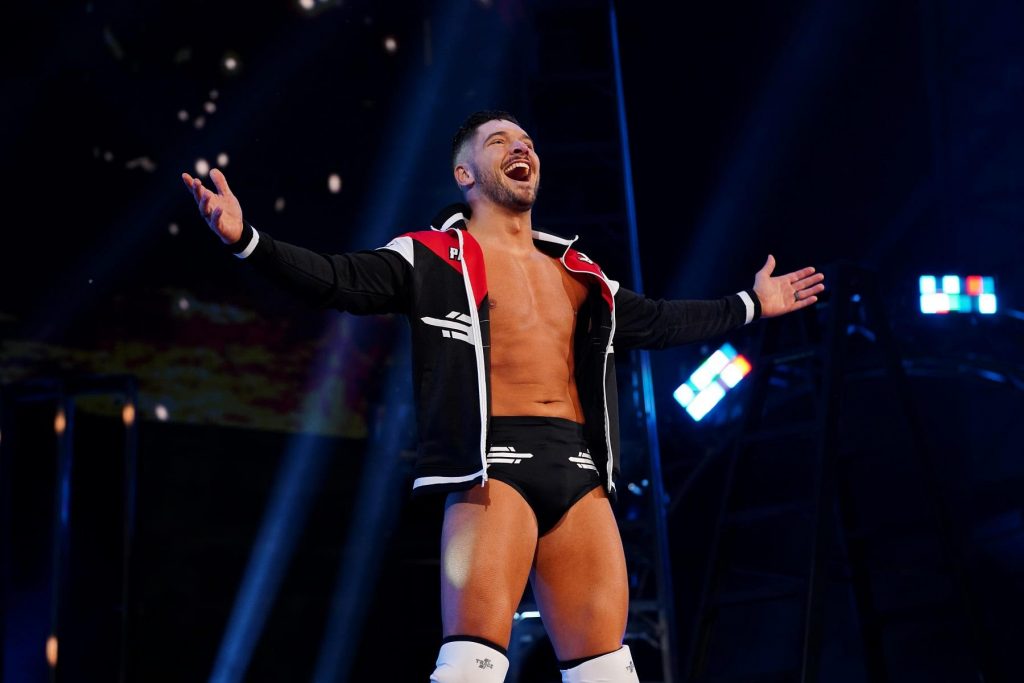 A wrestler could have all the talent in the world, but the talent needs the proper outlet to showcase it. If the promoter doesn’t give the talent the opportunities they deserve, then the promoter is not only doing a disservice to the talent, but the promotion itself because it is not getting the maximum payoff from the talent (investment) that they could be getting.

AEW has a very deep talent roster to the point that it is questionable if the roster is too large because they have limited TV time and cannot feature all the talent on TNT or TBS. AEW does have the outlet of their two YouTube shows, but the audience that watches it is significantly smaller than those that watch Dynamite. My point being is that the premium slots on network TV should be for your top talent to showcase them to the biggest audience that you can. This helps build traction for your show and promotion, especially with a fairly new promotion that is trying to help establish itself it needs to show its best talent.

This leads me to in my opinion one of the most underutilized talents on the AEW roster that is certainly not talked about enough in Ethan Page. As someone that has followed Ethan Page’s career well before his days in AEW, I personally have seen him capable of way more than what AEW’s booking has decreed him capable of as a talent.

Now if you are just looking at the numbers, at the time I’m writing this article, you’d see Ethan has a great win-loss record in AEW being 28 and 11 record or a 71.8% winning percentage in 39 matches. However, a large majority of those wins took place on either AEW Dark or AEW Dark Elevation. To be exact 17 of the 28 or 61% of those wins took place there and all 11 loses took place on either Dynamite/Rampage/PPV. Why that is a big deal is that a large portion of your audience is not watching you win because they aren’t watching the YouTube shows. At the time of this writing, this past week’s Dark and Dark Elevation has about 300K views each and by comparison Dynamite had a million viewers. The point being if a large portion of the audience is only seeing you lose and aren’t seeing your wins, they are going to view said talent as a loser.

This is a disservice to the talent and hurts your promotion as a whole. At the end of the day AEW like any other promotion is spending time and money on the talents on their roster as they are essentially an investment that they are hoping bring eyeballs to their product and get them to buy tickets, PPVs and merchandise to see said talent. As fans it is often forgotten this is a business and not just a wrestling show for entertainment. The goal is to turn a profit, so you want your investments to result in the maximum amount of returns financially to the company. Don’t get me wrong, I’m sure they want to entertain the audience as well, but the financial element plays a massive role as well.

Since his arrival in AEW, Ethan was put together with Scorpio Sky as an entertaining tag team known as the Men of the Year and was eventually folded into Dan Lambert’s American Top Team. As a whole, Ethan has rarely wrestled outside of AEW Dark or Dark Elevation and is either reduced to just backstage or seating in the audience segments or in the corner of Scorpio Sky, when he wrestles. This is nothing against Scorpio as I’m a huge fan of his as well, but Ethan is a much better talent than just being a cheerleader at ringside.

At only 17 years old, Ethan started his professional wrestling career in November 2006 in his native country of Canada. Ethan would work his way through the independent circuit paying his dues in this business. Working for little to no money and performing in front of incredibly small audiences like all the veterans that made it in the business that came before him. You have to truly have a passion for this business and Ethan certainly has that passion and love of professional wrestling.

My personal first experience of seeing Ethan Page was in 2016 during an Evolve 74, when he took on the Cody Rhodes, who had just left the WWE. Not to sound arrogant, but I was able to tell that he had that IT factor and would make it in this business. He had the charisma and storytelling ability that could connect with the audience. There was one moment in the match where a fan wearing an Ethan Page shirt was sitting at ringside cheering on Ethan as they were battling on the floor. Ethan asked the fan to hold Cody’s arms while Ethan punched him. The fan did it and the fan was looking for a high five from Ethan and Ethan just flipped him off. The fan then threw a fit and started flipping Ethan off. Was the fan a plant in the crowd? I don’t know, but it was entertaining regardless.

After seeing this match, I wanted to see more of Ethan Page and looked into his career and it turned out he had an intense feud with Johnny Gargano. They had an extensive feud throughout the indies from Alpha-1 to AIWrestling and Evolve as well.

Above are just two of the matches that they have had with each other, which showcase how good both men were even back then, and both are even better today. They had an absolute war in Evolve in an I Quit match at Evolve 49 and I highly recommend that you try to watch this match. Ethan’s favorite wrestler as a kid was The Rock and Ethan’s gear in this match was in tribute to the Rock’s Halftime Heat gear in 1999.

For 26 minutes these men beat the hell out of each other. Gargano would end up picking up the win, but both men were so good that this match elevated both men regardless of who came out on top. That is the mark of true professionals that both men walk away as bigger stars in the fan’s eyes. However, as much as I enjoyed this rivalry, it was Ethan’s feud with future AEW co-worker, Darby Allin that was a truly defining feud for both men’s careers.

Years before their feud in AEW, they had an incredibly heated feud in Evolve. When AEW headed towards a Darby vs Ethan feud, as someone that knew their Evolve history was very excited to see this feud on a much bigger stage than Evolve.

However, in my opinion their feud and this coffin match failed to capture that same magic that these men had in their Evolve feud. AEW didn’t even continue the feud after this coffin match as Darby won and both parties just moved on. This was a major disappointment because again these two have incredible chemistry together.

These men went to absolute war with one another at Evolve 81 and 82 in an Anything Goes Match and a Last Man Standing Match. Both matches stole the shows in my opinion and is one of my all-time favorite feuds in my 24 years of being a wrestling fan. Ethan did exactly what a great heel is supposed to do, beat the living daylights out of the smaller opponent and sell for your underdog opponent so that the crowd truly gets behind the babyface underdog. These two had an absolutely wild feud in Evolve from Ethan press throwing Darby into the crowd or out of the ring, which immediately reminded me of Bam Bam Bigelow launching Spike Dudley into the crowd in ECW. This is a spot that they did end up bringing into their AEW feud as well. They even brought in a body bag and shovel being used.

Darby would win the Anything Goes match but, Ethan would stand triumphant in the Last Man Standing match, as Darby would suffer a serious arm injury in this match but would finish the match. Ethan and Darby became bigger stars after this feud in Evolve and would eventually go on to bigger and better things as he would leave Evolve and re-form a tag team with fellow Canadian, Josh Alexander in Impact Wrestling.

A team that originally formed in 2011 as the Monster Mafia, but in Impact Wrestling they would come to be known as The North and they would become arguably one of the best tag teams in the business period. They weren’t just establishing themselves as the best tag team in Impact, but they were making it clear that they deserved to be in the same conversation as other major tag teams that fans were arguing about who was the best.

They would win the tag team titles and they dominated the promotion as they would defeat any and all challengers for 380 days. They would regain the titles one more time and hold it for 21 days, before Ethan would eventually depart the promotion to go to AEW.

Ethan is the type of wrestler that can do serious feuds like he has done with Darby Allin and Johnny Gargano and be a very successful tag team partner like he has done with The North and Men of the Year, but he can even do controversial off the wall comedy stuff as well. Although Ethan wasn’t happy with the final cut, his last appearance in Impact was fighting himself in a cinematic match as Ethan Page took on Karate Man.

Although this may be considered a low light for Ethan, it showed that he was willing to do anything to entertain his fans. Ethan has taken full advantage of social media by amassing a YouTube following for his vlogs including a weekly Toy Hunting Vlog. Which is kind of ironic considering he has yet to get a AEW action figure while others have gotten multiple figures and talent that came in after him are getting them before him. Which is a marketing mistake in my opinion from AEW and Jazwares for not making a figure of someone that actually has a toy hunting following.

I’m not saying that Ethan Page is the GOAT, but what I am saying is he is an incredible talent and based on his history prior to AEW, he is capable of so much more than how AEW is booking him. He is a talent that can do serious wrestling as a top heel singles wrestler or as a dominate tag team and can even do comedy. Ethan Page is a performer that could be way more utilized than just as a sidekick or a featured performer on the C and D shows of the promotion that only a third of the audience even watches.

All Ego could be a great heel champion either with the TNT or All Atlantic titles and Men of the Year, could be a great dominate team in AEW. Come on AEW wake up and realize what kind of talent that you have here with Ethan Page. Just give him the opportunity and allow him to excel and reach the heights that he is capable of achieving.