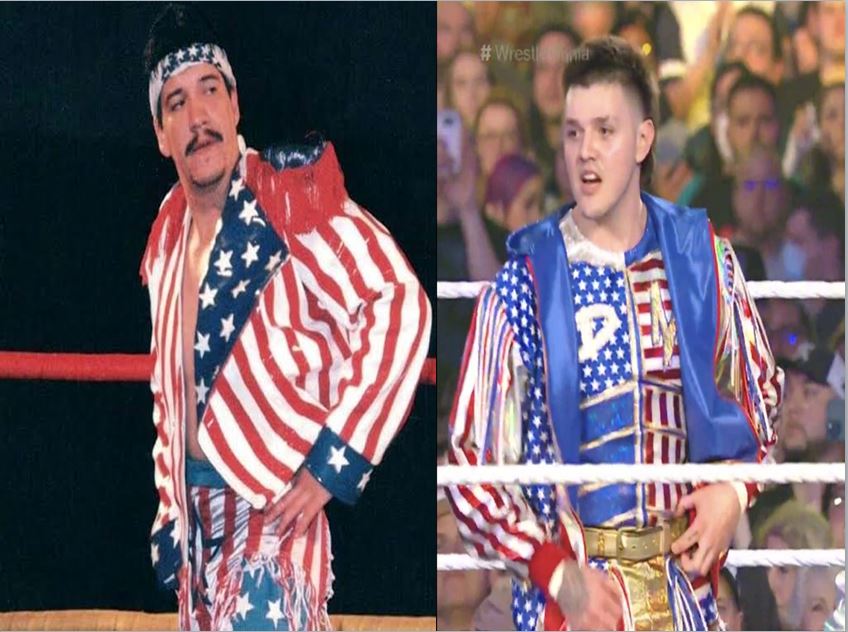 “The saddest thing about betrayal is that it never comes from your enemies. It comes from friends and loved ones.” – Unknown

Since Dominik Mysterio made his WWE debut, he has been at his legendary father’s side, and we have seen that unmistakable father and son bond. There is no question they are incredibly close both on and off screen, but the question becomes will Dominik break out on his own and escape the shadow of Rey Mysterio’s legacy. Dominik is in the oh so familiar situation that generational talent have been in for years, how do you succeed in this business on your own when you have a legendary parent in this business. We have seen Dominik and Rey as a child to becoming the first father/son team to win WWE tag team gold years later, but is it really the best move from them to remain a team until Rey retires?

Dominik like Cody Rhodes or Charlotte Flair is in an even tougher spot because their fathers are considered GOATs. This is not a situation like Randy Orton was in where he was able to exceed the careers of his father and grandfather. Rey Mysterio is considered by many as the greatest cruiserweight ever and just an overall all-time great. The truth is the odds are very much against Dominik from ever topping or even matching Rey’s greatness, but that doesn’t mean he cannot have a great career of his own.

Prior to his WWE return, I had written a piece on Cody Rhodes, stating that he needed to stop chasing Dusty’s shadow in AEW and embrace the inner heel since the AEW audience hated him despite him trying to be a babyface there. Of course, within months of me writing that piece, Cody would return to WWE and be beloved by the WWE fans and embracing Dusty’s shadow was a good thing for him. The reason I bring this up is Dominik is having a similar experience to what Cody had in AEW. Fans all over the internet are clamoring for Dominik to betray Rey.

WWE has teased Dominik being frustrated by Rey a few times, but as of this writing they haven’t pulled the trigger on a heel turn for him. There are of course the rumors and speculation that Dominik may betray Rey and join Judgment Day, but I don’t think that would be the best idea for Dominik. The reason for that being it is not like Judgment Day has been a great success so far since forming. So, if you are going to do something major like Dominik betraying his father it needs to play out perfectly and be done correctly for the maximum effectiveness. Essentially it needs to be worth doing so it can benefit Dominik’s career and not hurt it. Rey has talked about this before stating he doesn’t think a match against Dominik would ever happen.

Personally, I think if Rey and Dominik were pitched the right type of angle for this and Rey thought hey this may benefit Dominik and he actually got to wrestle his son as one of if not the last angle of his legendary career that may be fun for both of them. Like I said I don’t think Judgment Day is the right choice for his heel turn, but there is a piece from the past that may be absolutely perfect for this to truly work.

The now infamous custody ladder match, that first introduced audiences to Dominik and the continuation of one of the greatest rivalries of all time. The Mysterio vs Guerrero rivalry crossed promotions and these men brought the absolute best out of each other as they were each other’s best opponent. The custody of Dominik, with Eddie claiming to be his true biological father, could have been a disaster of an angle because it is a very soap opera story, but Eddie and Rey made fans care about this story and like always they delivered in the ring. Rey of course would win the ladder match as an 8-year-old Dominik got his first real taste of the wrestling business.

Eddie Guerrero is without question a GOAT and completely loved this business and would do anything to entertain the fans. However, there is one thing he loved more than this business and that was his family and Rey Mysterio was someone he considered family. Eddie loved working with Rey and Dominik during the infamous custody angle. In an interview, when Dominik was asked about working with Eddie said this:

“Oh man. He was just such a good guy, you know? Seeing him with my dad, they were best friends. And I remember in between takes that we would do of vignettes, he would give me Twizzlers, Red Vines, Lemonheads, bunch of candy.”

Because of their strong bond and if it could be done respectfully, I think you add another chapter to the Mysterio vs Guerrero legacy by embracing the past. Eddie Guerrero loved getting new talent over and although I never personally met Eddie, I think I know him well enough based on the stories so many of his peers have told over the years that he’d be ok with his name being invoked here if it would help Rey and Dominik tell their story. WWE owns the name and likeness of Eddie as they made an agreement with Vickie years ago, so legally they can use his name. However, like I said if you are going to reference Eddie it has to be done as respectfully as possible.

With Vickie Guerrero currently working for AEW, she will not be an option to bring in for this angle, but there is another option and I think he would be perfect for this role. I’d bring Chavo Guerrero back into WWE for this angle.

I think you have Dominik’s personality change little by little week after week. He gets more and more viscous, and his style starts resembling more and more the Guerrero style. He starts arguing and growing frustrated with Rey. Until he finally he shockingly turns on Rey. Have it be revealed that Chavo has been secretly advising and mentoring him behind the scenes. Chavo can act as Dominik’s version of a Paul Heyman. I’d have Dominik say something like “Chavo helped me realize I would have been better off if Eddie won the ladder match. You have done nothing, but hold me back and prevented me from reaching my full potential. From this day forward I am no longer Dominik Mysterio, I am Dominik Guerrero!”

Now there are a couple ways you can play this out, I think the smart play and again this is something from the past have Rey refuse to face Dominik. This is similar to what they did with the Undertaker/Kane storyline in 97/98, where the Undertaker refused to face his brother. The way that played out was that Kane kept pushing his brother to the point that he had no choice, but to face him. I think you do the same thing here. I think Angie and Aalyah getting harassed by Chavo and Dominik at their home with Rey on Raw forced to watch this would be the breaking point for Rey to agree to fight his son.

With Dominik in the ring wearing gear that is similar to Eddie’s and Chavo at his side, I have them smirking and laughing it up on what they are going to do to Rey. That’s when Rey makes his entrance in one of his most iconic attires.

They even recently teased this attire on Rey’s 20th anniversary celebration during the Raw MSG show. Where Aalyah presented her father the gift of his 1997 Halloween Havoc suit. This would be a nice moment to have Rey wear the suit one more time as he faces Dominik in the Eddie Guerrero gear.

I think this storyline could play out for a few months and three matches where they tradeoff wins leading to a rubber match at WrestleMania. This is an angle that could help elevate Dominik and be a great moment for Rey and of course a nice tribute to Eddie as well. Dominik needs to pick up a win over his father, with the help of Chavo of course in the first match. Rey would need to win the second maybe with the help of his wife and/or daughter leading to the rubber match. Now the question is what is the ultimate payoff for this angle?

That all depends on what Rey wants to do, if he wants this to be his final angle then I think you have it take place at WrestleMania, Dom beat him clean and after the match they hug, out of mutual respect and love after a long grueling match and feud. Rey in turn gives Dominik his mask to carry on the Mysterio legacy and of course Chavo gets mad, but Dominik punches Chavo and becomes a Mysterio again.

The other option is a similar payoff in that they hug and decide to re-team against Chavo and someone else maybe Priest (assuming Judgment Day is dead by this point) at Backlash for one final team up. Then Dom carries on the Mysterio legacy under the mask since he earned it.

I think this angle could certainly help elevate Dom, give a great send off for Rey and pay tribute to Eddie. It is certainly a better option than Dom joining Judgment Day or staying stagnant like he is currently. Will Dom ever be as good as Rey? Honestly, the chances aren’t good, but that doesn’t mean he cannot carve his own mark in this industry and proudly carry on the Mysterio name and tradition.