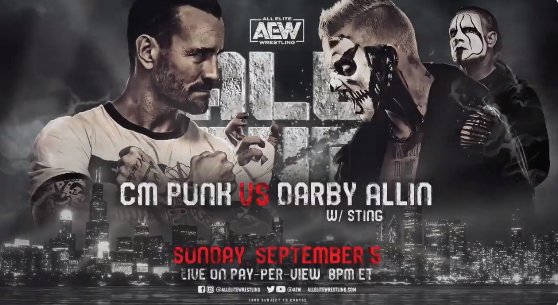 After 7 long years away from the world of professional wrestling, it finally happened. CM Punk is back! Last Friday night on AEW Rampage, in his hometown of Chicago, CM Punk entered the United Center to one of the most massive ovations in wrestling history. Not only was CM Punk back in pro wrestling, but CM Punk was, and is All Elite! His first order of business? Issue a challenge for September 5th live on PPV. CM Punk vs Darby Allin at All Out in Chicago. Allow me to get into why Darby Allin is the perfect first opponent for CM Punk.

There are a plethora of different matches that AEW could have gone with for CM Punk’s first match back. Honestly, it quite frankly wouldn’t have mattered who was first to the plate. CM Punk is one of the most over people in professional wrestling history, and his Dynamite ovation showed he is by far the most over right now. Sure, it was his return, but let’s not forget that for 7 years CM Punk’s name was screamed through arenas all around the world at the same intensity as they did last Friday night. The only difference was that he finally came out. No matter who CM Punk faces, whether it’s his first match back or the last match out, the electricity will be remarkable. AEW made the perfect decision by making Darby Allin his first opponent.

You would have to be out of your mind to believe CM Punk would lose his first match back. Especially at home in Chicago. That’s why Darby Allin is perfect. The only other person that would be equally as perfect as Darby would be Chris Jericho, but after losing to MJF his future is unknown. A matchup against Christian, or Jon Moxley, or Sting, or Kenny Omega, out of the gate would do remarkable harm to these folks. They are all matches that will happen at some point, but not now. So many people are undergoing defining pushes. The crowd strictly for Punk, combined with a loss, would hurt anyone badly. Anyone except for Darby Allin.

Surely, you can make the case that Darby is a younger talent, and shouldn’t be losing to older veterans like that. The truth is, nobody benefits more than Darby Allin against CM Punk. Darby Allin will now forever be remembered as the person that welcomed CM Punk back to the ring. Although he may lose… depending on his performance he will live in infamy for potentially giving CM Punk a hassle. He can lay claim to being the one to bring CM Punk back down to earth, into the realities of the grueling professional wrestling world. Last but not least, if the performance is superb, the electric crowd for CM Punk will split for Darby Allin as well.

The blueprint is laid out for Darby Allin to be an absolute star following this CM Punk match. Sure, he may lose, but in hindsight, he’ll be the biggest winner! Anyone else against CM Punk is almost certain to be a disaster for their momentum going forward.

Congratulations to Darby Allin for being able to welcome CM Punk back to wrestling. It’s an honor and a privilege for anyone to have that spot. Darby not being a part of a big push at the moment allows for him to not have momentum killed but rather build it. Darby Allin shall live in infamy after September 5th. Be proud, kid.