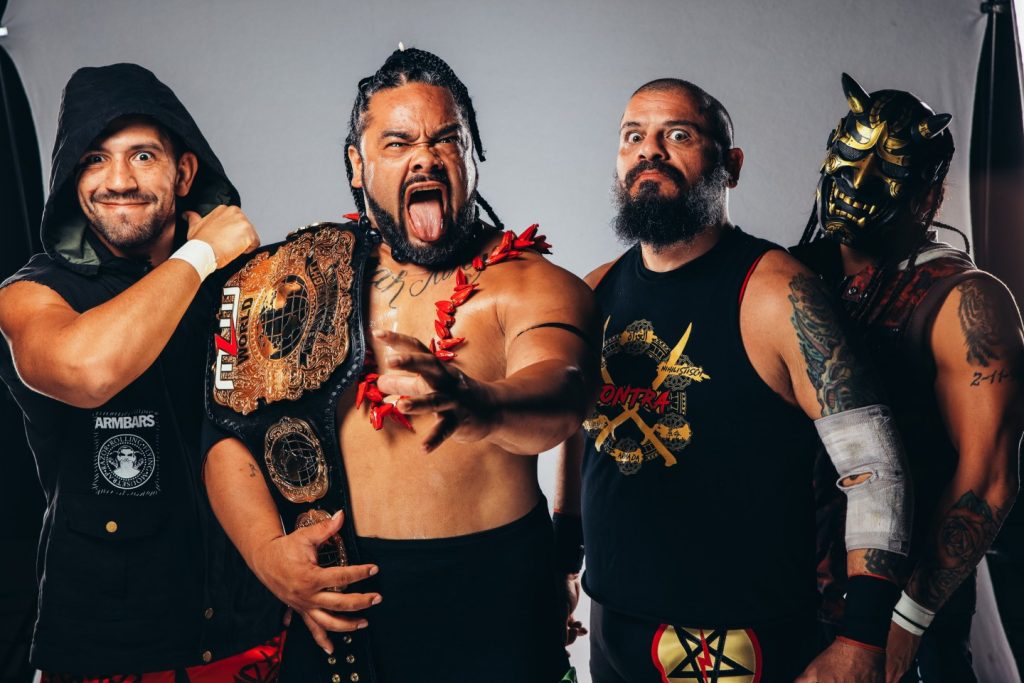 In the world of professional wrestling, the formation of factions has created some of the greatest characters and wrestlers in history. Factions like the Four Horsemen, D-Generation X and the NWO stand the test of time as factions that have changed wrestling history through their respective class of amazing talent, their crazy antics and actions and their ability to leave a lasting impression on their respective companies. Major League Wrestling is no exception to this. With great factions throughout its history like Promociones Dorado, Team Filthy and The Dynasty, MLW is no stranger to creating highly entertaining and influential factions. However, no faction in the history of the company has had such an impact on the company as CONTRA Unit has. For the better part of two years, CONTRA has run roughshod over the MLW roster, holding the MLW World Championship hostage and terrorizing anyone and everyone that dares to cross their path. CONTRA has established themselves as the top faction in the company and, in my opinion, one of the most dominant factions in wrestling today and here’s why.

One of the most important aspects of a wrestling faction is it’s presentation. A successful faction has to be presented as a legitimate threat to other members of the roster that dare to cross their path. They need to be presented in a way that makes audiences look at them and think “there’s no one that can stop these guys.” CONTRA has this down to a science. CONTRA Unit is presented as the worldwide dealers in violence, their sole mission is to spread violence to the members of the MLW roster. The way this was achieved at the group’s inception was perfectly executed. This group of violent mercenaries came into MLW and immediately demonstrated a brand of violence that hadn’t been seen in MLW for a long time. From driving railroad spikes into competitors’ skulls to demolishing opponents during and after matches to even throwing fireballs in wrestlers’ faces, this group immediately made it clear that their mission was violence and only violence. This created an immediate sense of legitimacy for them because there was no sense that this was just a group that would die off after the immediate feud with Tom Lawlor. There was this sense that this group was here to stay long after this feud and that it wasn’t simply a means to an end. MLW did an excellent job presenting CONTRA Unit with an immediate sense of legitimacy. Factions need to immediately be presented with a clear motivation and a clear reason to exist. Otherwise, it’s nothing more than a group of guys randomly paired together.

On top of being presented as a legitimate group of men that should be feared by the rest of the roster, another big reason for CONTRA’s success is that while on paper the gimmick may sound very goofy and over the top, the way it’s presented is actually very grounded and realistic. The idea of them being worldwide dealers in violence and every character coming from a certain section of the world is very creative and makes them come off as a legitimate worldwide threat. The inclusion of people like Ikuro Kwon from Singapore and Daivari from the Middle East showcases the variety of competitors the group has. Even the way these characters themselves are presented come off as very realistic as well. Every member delivers on CONTRA’s message of violence in their own way, going out to the ring and defeating their opponents in the most violent way possible. They may not win every match, but that’s not important to them as a whole. Their mission is to hurt their opponents, to make them suffer. This comes off as very real and the variety of ways they go about it like driving spikes into opponents’ skulls and even waterboarding opponents with their flag come off as very gruesome means of torturing opponents, thus living up to their message. Even characters like Mads Krueger have this aura about them that makes them intimidating, yet somehow realistic. There’s nothing over the top about the Black Hand of CONTRA. He just comes across as a seasoned soldier that goes out there to continue CONTRA’s philosophy.

A key ingredient to a successful faction is the ability to cut promos in addition to backing up what you say in the ring. While a faction like CONTRA doesn’t necessarily have to cut promos to feed their agenda, they still have at their disposal a great talker that hypes up every member of the group as this intimidating force ready to continue the fight against MLW. This man is Josef Samael. Samael is an excellent mouthpiece. He does an excellent job hyping up CONTRA’s philosophies and motives and presenting them as realistic as possible and he does an equally excellent job portraying his soldiers, especially Jacob Fatu. On top of that, the man just has a presence that is different to the other members of CONTRA. While he does wrestle frequently, Samael is more often than not in an undisclosed location, dressed in a fancy suit and sunglasses, smoking a cigar preaching the will of CONTRA. But he doesn’t come across as goofy in the slightest. That’s because he gives off the impression that the gimmick is real to him. He carries this persona with such conviction that he genuinely comes across as the leader of this organization of mercenaries. On top of that, he does a flawless job hyping up every one of Fatu’s title defenses and putting over his opponents. He always delivers great promos making the audience believe that these people might have a chance against his champion, only to finish off and say that while they’re good, they can’t beat Fatu. It’s not a knock at the competitors, but rather simply a testament to how well Samael and MLW have presented Fatu. Which brings me to my final and biggest point.

Every member of CONTRA Unit in their own way has a role to play within the group. Kwon is a martial artist that is portrayed as a violent pit fighter. Simon Gotch is portrayed as a crazed grappler and Daivari is portrayed as the crafty veteran. Josef Samael is portrayed as the mouthpiece, the ringmaster behind the whole group. Mads Krueger is portrayed as the heavy that comes off as the second in command, the mini boss for people like Alexander Hammerstone to defeat first before they get to the final boss. Who is this final boss? The MLW World Champion, the Samoan Werewolf Jacob Fatu. This man can be described in one simple word: unstoppable. Fatu has been champion for 738 days and counting and there’s almost no end in sight for this title reign. Fatu is the perfect example of the unbeatable monster champion. He beats his opponents in convincing fashion. He presents himself as a madman, but still aware of what’s going on around him, that he’s aware of the violence he inflicts. He’s a fantastic in ring competitor as well, busting out moves that most men his size would only dream they can pull off like moonsaults. Fatu has had countless great matches with guys like Davey Boy Smith Jr, Cima and Jordan Oliver but at the end of the day, Fatu still defeats everyone who dares to oppose him. Fatu is the greatest staple of CONTRA that keeps them at the top of MLW. His ability to hold possession of the MLW World title for as long as he has with no end in sight is a testament to how well CONTRA has demolished the roster.

CONTRA Unit is by far the most unstoppable faction in all of Major League Wrestling. Their grip over the roster is something that hasn’t been seen before or will probably be seen since. However, CONTRA Unit deserves to be seen as a great faction in today’s world of professional wrestling, rather than just in MLW. CONTRA has so many intangible factors that makes them unique and successful, their most prominent one being their ability to come across as legitimate, yet realistic. Their ability to come off as a genuinely imposing threat while still being something that works within the overall sports-like presentation of MLW is remarkable and is a testament to everyone involved within the group and MLW themselves. They have a solid mouthpiece in Josef Samael, who convincingly preaches the violent message of CONTRA and puts over each and every soldier within the group as a legitimate threat to the roster, as opposed to just one. However, they all ultimately have one purpose, and that is to continue the domination that Jacob Fatu has over the MLW championship. That title is their key to staying at the top of the company and their violent means to make sure Fatu keeps that title has made for highly entertaining television. CONTRA is a fantastic faction within MLW, but it’s time that they’re appreciated as a fantastic faction within wrestling itself.