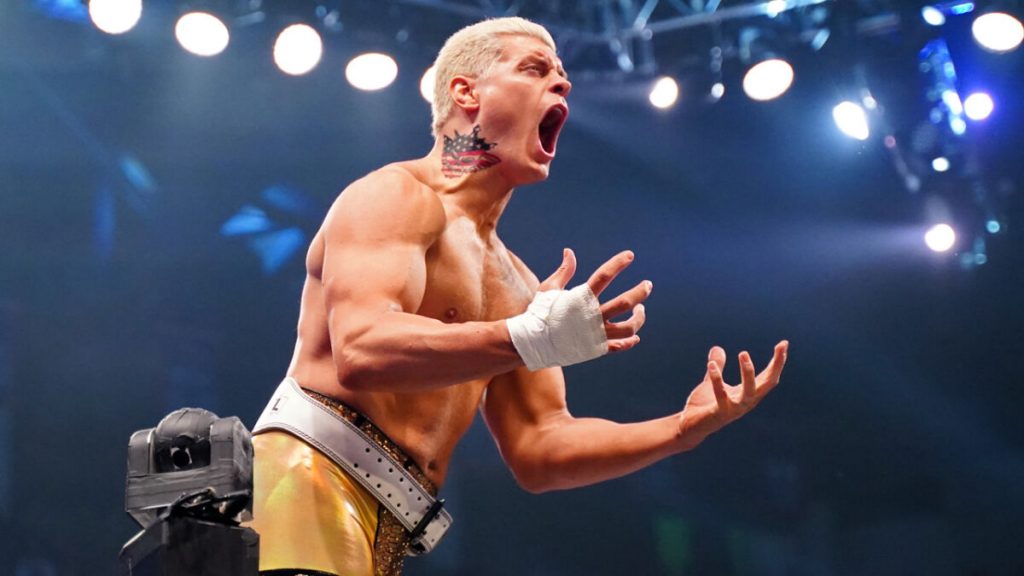 If you asked me to name the most polarizing wrestlers in AEW, I could give you a long list. I’m fairly sure I’ve seen criticism of every wrestler on the roster, some of it justified some of it not. However, there’s one performer who gets a lot of criticism for his alignment. A large portion of the internet wrestling community believe that Cody Rhodes should turn heel. As you’ll have seen from the title of this article, I disagree. In my mind, there are three main reasons as to why Cody works better as a babyface, which I’ll set out below.

Before we get started, check out this awesome argument in favour of a Cody heel turn by Emmanuel Vasquez!

The Face That (Literally) Runs The Place

Let’s start with the obvious one, Cody Rhodes is AEW’s top babyface and can take losses without losing credibility. In effect, he is AEW’s John Cena-equivalent. “But what about Moxley and Hangman?” I hear you say. Well, Hangman is still gathering momentum to dethrone Kenny Omega and is not quite at the same level of recognition amongst casual fans. People might recognise Cody from his time in WWE or put two and two together with the surname “Rhodes,” and link him to his father. But Hangman doesn’t have that level of recognition amongst casual fans that a top babyface needs (yet!). On the other hand, Jon Moxley is firstly more of a tweener/anti-hero. Secondly, his obligations in NJPW prevent him from fully dedicating himself to a top babyface role in AEW.

Cody on the other hand is fully committed to AEW and has demonstrated that he is willing to put heels over without losing any credibility as a star. MJF, Malakai Black and Mr Brodie Lee were all elevated by beating Cody Rhodes. Whilst I accept that maybe Ogogo should have gone over at Double Or Nothing, the majority of his big losses to heels have elevated talent.

Our Country, Right Or Wrong

A lot of people are calling for Cody to embrace the cocky streak that his character has consistently demonstrated. As well as this, his use of belt shots and condescension towards Darby Allin have arguably sown the seeds for a turn. However, “Homelander Cody,” a heel version of his cocky patriot character simply wouldn’t work. If the American Nightmare is going on about how great the USA is and the babyface argues it isn’t, who’s going to get booed by a majority American audience? We saw it against Ogogo. Criticise America and nine times out of ten you’ll get booed.

Furthermore, AEW doesn’t currently have a big non-American babyface other than Chris Jericho or Christian, who don’t  gain anything from beating Cody. Having an American like Hangman criticise America like Ogogo did would seem hypocritical. It’s therefore illogical to turn his current character heel, since it’s more likely that the face would get booed.

On the Rhode(s) To The Top

Finally, and this is perhaps the strongest case for Cody to remain a face is the business case. Of all of the Elite, Cody is the only one still a face. I’m not counting Hangman, since he was excommunicated. He’s also the public face of AEW alongside Tony Khan. The “Rhodes,” brand is taking off, with TNT featuring him on Go Big Show and granting him a reality-esque show about the Rhodes family. TNT and the powers that be behind the scenes at Warner clearly see something in Cody, his family and his legacy. So why would it make sense for him to play a bad guy, when he’s the face of the company and building his own brand.

There may well be a future where the American Nightmare embraces his dark side. But right now, AEW needs a top face to elevate heels more than another top-card heel. TNT clearly wants to embrace the Rhodes brand, and it makes sense for Cody to work as a face at this time. Finally, the Cody Rhodes character as currently seen on TV wouldn’t work, as babyfaces would get booed over him. That’s why I honestly believe that Cody Rhodes works better as a face right now.