Honestly: Cody Rhodes vs Seth Rollins Is The Most Compelling Story Going Into WWE Backlash 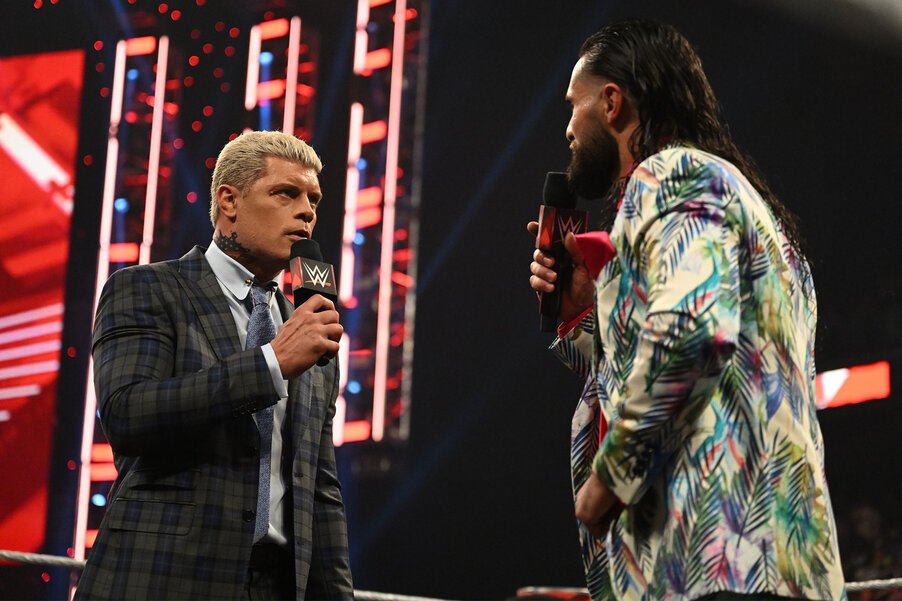 As we are only a few days away from WWE Backlash and to me the most compelling story going into the show comes as no surprise that it is the Cody/Seth story. It is very difficult for any PPV card to be the first one to follow WrestleMania and a WrestleMania rematch is even harder to keep the fans interests in it. This matchup, however, is so incredibly different than any rematch from WrestleMania ever. Now here me out as I previously wrote about the build up to their WrestleMania match was all Seth as Cody hadn’t officially been announced as his opponent.

Seth desperately wanted his spot on the WrestleMania card as we all know, but every road to the showcase of the immortals he was met with a roadblock as he kept losing all his opportunities. With each loss he became more desperate, unhinged and downright crazy as we all watched every week. Seth without a doubt in my mind has found his true sweet spot as a character as he is delivering his best work as a character in his career. From the outrageous suits to show he is the king of drip as he calls himself, to the promos and of course his in-ring work, which has always been top notched. As we know, Seth got the attention of Vince McMahon, as he threatened to hold up WWE programming unless he was given his spot on the WrestleMania card. Vince told Seth all you had to do was ask for it but wouldn’t tell him who his opponent.

We all knew or at least suspected that the man standing across from Seth at WrestleMania would be Cody Rhodes. WWE played it absolutely perfectly not having Cody appear or confirmed in anyway leaving just that little bit of doubt with the audience if it was going to really be Cody. The other question of course was this going to be a new version of Cody Rhodes, or would WWE actually allow the American Nightmare version that Cody created and built during his 6-year hiatus from WWE. Having Seth staring up the ramp yelling come on come out here, making him and the fans waiting just a little longer was perfect. It helped build even more anticipation for a match the fans were already hyped for to begin with. Then the pyro going off followed by “wrestling has more than one royal family” as the intro to Kingdom as the American Nightmare rose from the stage completely unchanged from his AEW days.

It was one of the most surreal moments to witness as a fan that Cody literally left AEW a company that he helped found and was an executive vice president of, but Cody had unfinished business in the company where his career started. Cody returned home to the WWE and created an amazing WrestleMania moment. Seth was the perfect first opponent for Cody’s return, as their styles blend together perfectly. These men delivered an absolute WrestleMania classic in that ring, which we pretty much expected that both men were capable of delivering. Cody left WWE being undesirable by the company and returned to WWE undeniable by the company and the crowd fully embraced him as a top guy as well. The final truly special moment of this return is when Cody pulled out the jabs and the bionic elbow in tribute to his legendary father, Dusty Rhodes and the crowd was fully with him from the very first jab through the elbow. It was a full redemption moment for Cody, and Seth’s WrestleMania moment his character so desperately wanted became Cody’s moment instead.

Both men are completely different performers than they were 6-years ago, when they shared the ring together, but never as part of a singles feud. So, as Cody is continuing to be promoted as a major star and top guy by WWE for the first time ever and the crowd seemingly can’t get enough of Cody as a face, this was the perfect playground for a jealous and delusional Seth. So, after Seth set the stage up himself for their WM match, this time both parties are involved, and we knew this would be promo magic. Seth has been playing mind games with Cody for weeks, like the night after mania, coming out during Cody’s return promo, smirking reaching out his hand and telling Cody “Welcome home”.

It was expected that Dusty Rhodes would be brought up in this rivalry between his real-life son, Cody and one of Dusty’s “NXT Kids”, Seth. Every performer that was in NXT with Dusty, were given such valuable knowledge and guidance as they sat under the learning tree of the American Dream. Dusty was very much a father figure to the talent of NXT to the point the performers started saying they were Dusty’s kids. It was a term that Cody himself has said over the years, he knows they mean well by saying that, but was never a fan of the term especially since Dusty has actual kids and two of them are actually in the wrestling business.

Dusty played a huge part of both these men’s lives and careers and to witness these men using the knowledge that Dusty gave them to create magic is the greatest tribute that could be paid to Dusty. They aren’t using Dusty as the focal point of the rivalry, which is something he wouldn’t have wanted anyway because the focus should and needs to be on Cody and Seth. However, you need to acknowledge him as it is only right. Cody has taken the highroad in this rivalry, but in the go home promo this past week on Raw, the line was crossed.

I loved the line that set Seth off was being told, “you are one of best wrestlers in the last 20 years, but you are delusional”. When Seth flips the switch from happy, fun delusional Seth to bitter, jealous and vindictive delusional Seth it is masterful. Seth telling Cody, I’m not the one that’s delusional, “your father was an egomaniac, who thought he transcended the business, he was delusional and so are you”. That was the first viscous shot fired by Seth, followed by another, “your father wanted to be WWE (WWWF) champion, but he wasn’t good enough and as long as I’m here, you aren’t good enough either”. It is well known that Cody’s goal is to win the title that neither his father nor his brother was ever able to win, the WWE Championship, as Cody told the world in his return promo. Seth has had the WWE career that Cody wanted for himself, including holding the WWE Championship multiple times, so that certainly adds to the storytelling here as Seth throws his digs that he is better than Cody.

You can see the look on Cody’s face where this went from a match trying to prove that you are the best in the world by beating the best, to a personal rivalry. The line clearly being crossed, as Cody had finally had enough as he started swinging away on Seth. The crowd was fully on board for the ride. As Cody was avenging his father’s name, the crowd and audience at home could relate to defending the family name. It is relatable to stand up for a friend or loved one that is being attacked physically or in this case verbally. This physical altercation was just enough to tease what these men will bring to the table on Sunday in match that isn’t just about who the better man is, but a rivalry with both men wanting revenge on the other. Cody looking for revenge on what Seth said about himself and his father and Seth on Cody for taking his WM moment away from him.

Those lasting images of Cody delivering his cutter and Seth running away as Cody grabbed Seth’s jacket that he left behind and launching it into the crowd and Cody staring down Seth. Those were the perfect way to go home, to hype up their match on Sunday. I personally don’t think any other match has been better built or more compelling than this one as they are two of the best performers in the business today. Personally, I wish the PPV name of the one following WM was still Unforgiven, because that would fit this rivalry perfectly in my opinion. They already had an audience that wanted to see the match to begin with from a purely in ring quality standpoint, but now they added more gas to the fire making the rivalry personal, which just adds to it and helps in the storytelling magic that they will give us on Sunday.

Two things are certain, Dusty would be proud of both of these men, and they will deliver another absolutely classic at Backlash.