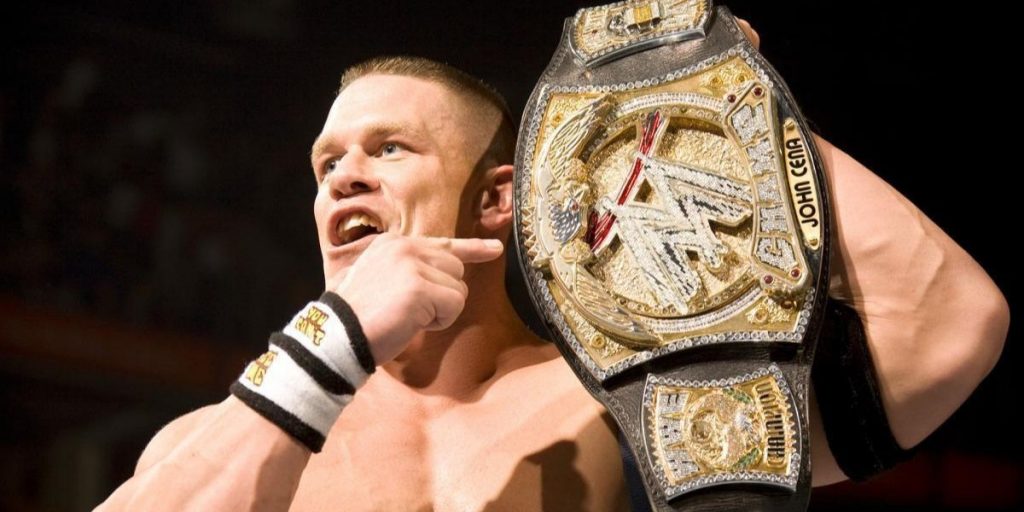 There was a point in time when the marquee value of the World Champion was measured by box office, ratings, merchandise and magazine covers/coverage.

Since the Hogan era, WWF/E valued its top star as the walking representation of their brand’s merit and character – all to benefit the company’s exposure, and further audience attraction. Champions of different companies like the AWA, NWA, and the later modern companies like WCW, ECW, were reflective of the greater culture and landscape of pro wrestling, rather than the the monotonous focus of Vince McMahon’s brand of Sports Entertainment.

Positioned much more as a media entity today, WWE is the wrestling industry leader in a current entertainment market where deals feature guaranteed money, and industry dynamics are reduced to content fulfillment for platforms. The company has grown less dependent on marquee name value, and more on the power and familiarity of the brand. It’s incredible to think that 20 years has passed, since the debut of John Cena. A wrestler that can be argued to be the last, true WWE Champion.

“If Cena wins, we Riot” was a proclamation of genuine hate and disapproval from a section of the audience, and not a hashtag or catchy chant shared by today’s more “character” obsessed presentation.

At the time of this writing, Roman Reigns record breaking 500+ days as champ, is arguably overshadowed by the constant talent releases, controversies within show presentations and quality, and a lackluster roster of star power that offers little to no variety. The WWE championship more than ever, has been reduced to a prop. Its value is both decreased by the presence of so many other in-company World Titles, and also increased by the reigns (no pun intended) of a select group of individuals.

Cena was the guy all over WWE’s licensed publications, countless merchandise, numerous PR initiatives for films, TV appearances, and countless charitable events. His accession to the top of the card had started as the heir apparent to Austin’s throne as a rebellious figure, capable of explicit rap promos, and brutal violence, was soon cut off at the knees by the FCC’s stranglehold on TV and content, after the 2004 Super Bowl incident. A shifting in censorship that was already brewing in WWE, as it pushed towards more accessible programming (TV-PG) on Smackdown, while still carrying a more mature tone on its Monday Night [Raw] programming.

His popularity suddenly became an updated version Hulk Hogan, edgy enough for the modern mainstream WWE fan, but not enough to compete with Steve Austin’s anti-establishment of the 1990s. The fan base was split, either loving or hating Cena’s status as the face of the company. Yet, his time served as champion and “thee guy,” was during a revived ECW brand and storyline, a still prominent roster of veterans and young talent, the presence of blood in big matches, and a fan base that still possessed a passion for the company, beyond the blind loyalty of the modern, internet era.

WWE in hindsight, despite its efforts of pushing forward into more entertainment avenues at the time, was still very much, Pro Wrestling.

In the wake of the Monday Night Wars, the fan base of the early to mid 2000s had taken to the independent scene (ie. ROH, Chikara), the international market (ie. NJPW, NOAH) and the then, second biggest company in the US, TNA Wrestling (now known as Impact). Despite WWE’s success, Cena’s branding as the top guy of the sport left a lot of fans scrambling for alternatives, which arguably had not been a thing amongst audiences since the Hogan days. The reactions to his entrance could easily be a serenade of cheers and screams of jubilant support, or sometimes a chorus of boos and jeers, despite his presentation of being the hero of the company. This was not fans playing a part for his role in the company. These were genuine responses, during an era where the internet was still developing as a broad platform for the increasing number of smart fans. The message boards and chat rooms of the era were places where the section of the audience smart to the workings of the business could complain and argue their case, but had not grown into the machine of influence that today’s industry has sadly become engulfed in.

“If Cena wins, we Riot” was a proclamation of genuine hate and disapproval from a section of the audience, and not a hashtag or catchy chant shared by today’s more “character” obsessed presentation.

Cena’s persona was not really different from what we saw on the Late Night show appearances, or the then series of WWE DVD releases of its big names. That’s what allowed for a connection between the supporters and the detractors, because there was a sincerity in his presentation. He was occupying a space that was built on the tradition of mainstream popularity, and the reliance on pop culture’s infamous enforcement of “relevancy.” Whether it was guest spots on MadTV, appearing on the cover of Muscle & Fitness, or his roles in WWE Film productions like 12 Rounds, and The Marine – Cena was a presence, in the lineage of Hogan, Hart, Austin and Rock. As stated before, not since 80s Hogan, was there a wrestler in the role of both marquee name value and babyface, that arguably could not shift to heel, based on both the merchandising revenue, and the company’s well publicized charity commitments. That level of individual popularity as a business structure, is not possible today, in a market that is overly attached and exposed to every move made, both by company and talent alike. Cena was the guy that Pro Wrestling fans could feel a certain way about, while casual fans could easily get behind.

The impact of a heel turn during Cena’s later run in the late 2000s, could have potentially rivaled that of Hogan in 96. It’s debatable that there are no stars left, titleholder or not, who’s shift in performance could rival the last big hot period [1990s] in Pro Wrestling. For starters, the overexposure of the business has rendered any investment of pure “believability,” and viewership is at an all time low across the industry landscape. A sad reality that Cena also contributed to, during his time.

The “superman booking,” the repetitive Orton rivalry, the unnecessary defeat of the Nexus faction, and being pinned by Kevin Federline as WWE Champion, are examples for the ripple effect of bad decision making, contributing to some of WWE’s current start power problems.

Despite those shortcomings, Cena’s time at the top is a big reminder of the last days of WWE as tolerable, mainstream wrestling product. He was the last champ to reign before WWE permitted the UFC’s growth with The Ultimate Fighter, which contributed to the decent of their PPV buy rates in the mid 2000s. He arguably served as the last marquee name of the company to compete at a Wrestlemania numbered with lineage (WM XXX, after this Wrestlemania has taken on the identity of a brand only event). Lastly, his time as the company’s big star marked the last generation of magazines acting as the central means of coverage before the rise of social media and podcasts.

John is the big name reminder of when the Main Event sold the show, and the posters’ art direction told a story of the event’s conflict and theme. When the identity of a show was shaped by the WWE’s unique aesthetics, headlining talent, and PPV set designs in an attempt to add variety to their varying programming.

It’s melancholy glance back, at Cena’s interesting run with the “torch.” A callback to the era of WWE’s last big hoorah.

Been a wrestling fan for 30 years. I try my best to mix my writing with landscape references for of time period, to give better insight for the discussion. I'm a filmmaker, photographer and figure collector.