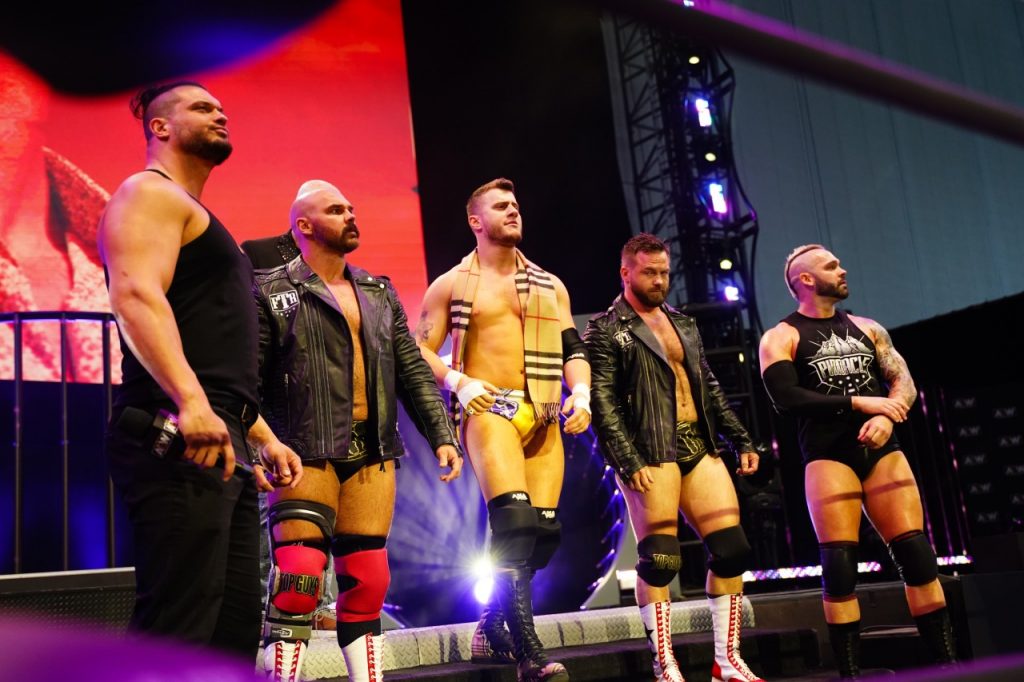 One of the most heavily featured programs on AEW TV today is the blood feud between The Inner Circle and The Pinnacle, led by Chris Jericho and MJF respectively. While there have been many high points in the feud, it seems as though its overall booking has squandered The Pinnacle’s momentum only months after their inception. Where did things go wrong?

Earlier this year, MJF was kicked out of The Inner Circle by Jericho after his fellow members discovered and exposed his plans to carry out a coup on the group. This resulted in MJF establishing The Pinnacle who brutally attacked and rendered The Inner Circle out of action for a few weeks. During this time, The Pinnacle introduced themselves to AEW audiences with strong promos and a victory and post-match attack on The Varsity Blondes and Dante Martin. Given this direction and the well-roundedness of all its members, it seemed as though The Pinnacle were on their way to becoming the most dominant faction on the roster.

That was until The Inner Circle returned and carried out an unexpected ambush of their own on The Pinnacle. Arguably ten times more intense and humiliating than the first attack, The Pinnacle’s legitimacy was immediately weakened, and watching its leader have his head dunked into a toilet bowl did not do anyone any favors.

A week later, The Inner Circle challenged The Pinnacle to a Blood and Guts match, which The Pinnacle accepted. During the build to this match, Jericho faced Dax Harwood of The Pinnacle one-on-one, with Iron Mike Tyson as the special guest enforcer. Not only did Jericho beat Harwood, but the latter’s tag partner, Cash Wheeler, was knocked out by Tyson who was later named an honorary member of The Inner Circle. There is no shame in putting over all-time greats such as Tyson and Jericho, but the entire ordeal further tipped the momentum towards The Inner Circle, leaving The Pinnacle feeling like less of a threat.

The Pinnacle got their redemption during their violent Blood and Guts match after getting The Inner Circle to surrender when MJF threatened to throw their leader Jericho off the top of the cage. They surrendered, causing The Pinnacle to win, but MJF pushed him off anyway. The visual of both Jericho’s fall and MJF standing on top of the cage, bloodied and unhinged, undoubtedly gave MJF and The Pinnacle more credibility. However, the win protected The Inner Circle still as they did not show much weakness in the match, or surrender due to pain, but rather due to their bond and desire to protect their leader.

It would have been logical to keep Jericho off TV for at least a few weeks after the match to sell his injury, but, only a week later, in the middle of The Pinnacle’s victory celebration, Jericho and the rest of The Inner Circle appeared and doused The Pinnacle in Jericho’s own champagne, ‘A Little Bit of the Bubbly’, ridiculing them once again. The following week, The Pinnacle tricked The Inner Circle into walking into an ambush, showing flashes of their intelligence and wit; however, this would not amount to much as they lost to The Inner Circle in a Stadium Stampede match at Double or Nothing – their second loss in the feud.

Weeks later, while cutting a promo, The Pinnacle is interrupted by The Inner Circle once again and watch helplessly as the latter destroy the former’s limousine. The next time The Inner Circle met The Pinnacle in a match, we saw Jake Hager take on Wardlow in an MMA-style cage fight which Wardlow – you guessed it – lost. The Pinnacle’s third loss in the feud. I’m sure you’re starting to see the pattern now; this feud has facilitated an unending cycle of ridiculing, embarrassing and beating The Pinnacle, who are not only meant to be the most dangerous and villainous faction in the company but are also one of its newest. Instead of building them up and legitimizing them, this feud is making them look silly and as though they are not smart enough to defend themselves or outwit The Inner Circle. While they have been able to get in great promos and execute some sneak attacks, they largely have not delivered when it mattered, thus hurting their reputation as a group.

I am not of the opinion that this has been a bad feud in any capacity. Both factions have delivered stellar content and matches, and multiple stars are being created due to their involvement; however, I would like to see more of an effort being made to protect The Pinnacle as much as, if not more than, The Inner Circle, as the latter have been around for far longer and have gone above and beyond in establishing their legitimacy. With this feud shifting its focus from being group vs group to multiple sub-feuds, I believe there is much potential to right many of the wrongs and catapult The Pinnacle into stardom while maintaining The Inner Circle’s reputation or even disbanding them so its members can chase titles or involve themselves in other stories.