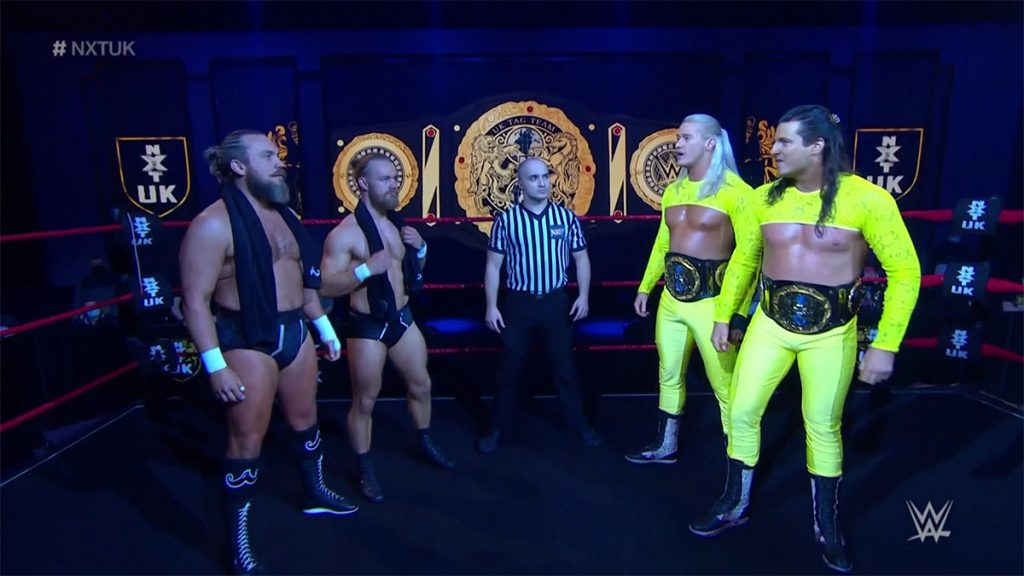 Writers Note: Reasoning for this review being posted last is that former NXT 2.0 /NXT UK reviewer Dakota Cohen did not post his last review and what a way to take over the spot of NXT UK reviewer than to post two reviews at the same time.

The show starts with a promo package to build up the tag team championship main event. Trent Seven asking “what if this is my last chance?” Really building this match almost as the last opportunity for Trent Seven to win a championship since he has failed multiple chances this year. Trent is one of the older guys on the NXT Uk roster, but age doesn’t limit him as he does provide really enjoyable matches regardless.

This is their first match since both were signed to NXT Uk and this match was exactly what it was meant to be. Emilia is representing Meiko Satomura as Blair is looking to be next for the champion and Emilia represented her mentor well. They didn’t make Emilia look like a pushover for Blair to get to Meiko. Blair is a great striker and can be very athletic when she needs to be. This was a fun, simple opener to the episode. Enjoyable knee strike before the finish.

The post-match attack provides Blair a bigger reason to be viewed as a heel in this division, locking in the STF a move that Meiko uses. Challenging Meiko and referring to herself as the “Ichiban Gaijin,” The Top Foreigner.

Tyler warming up as Trent has a more serious look on his face as the main event is still to come.

Noam Dar won the heritage cup in a method to build up Pretty Deadly and Moustache Mountain, having Pretty Deadly cause Trent to accidentally throw the towel in for Tyler. Noam is acting like a typical heel wanting respect for the fluke-like victory. Sha Samuels carrying the cup provided a little comedy as to how he knocked on Sid’s door and his reaction to the number one contendership match for next week. Noam is going to need to prove himself worthy of being the Heritage Cup holder when he faces A Kid or Nathan Frazer.

Recap of Ilja Dragonuv Vs Rampage Brown, playing off the stoppage as Ilja’s devastating enziguri. It was said that Rampage was tended by the medical team after the injury. Rampage has declined to further comment about his status.

In the Uk performance center, as Xia is in a group of people, she was approached for comments about her loss and is really becoming bratty. She is adapting a bratty attitude stating she didn’t have enough time to prepare for the title match. Blaming Sid and accusing him of setting her up. Storming out of the camera saying leave me alone as her friends have left her. The slow build to Xia turning heel is pretty enjoyable and I am excited.

Jordan Devlin makes his entrance getting booed by the limited people in attendance. Once on the mic, he wants to clear the air with the fans stating he was the longest reigning cruiserweight champion, and claiming to be the franchise and Ace of NXT UK. Wanting to focus on the NXT Uk Title. Calling out Ilja to his ring. Ilja says this brand is about fighting, and if Jordan wants a shot, ask him. Jordan called back to the mat being sacred and claimed when Ilja gives him a shot he will end his career. Ilja isn’t intimidated or scared of Jordan and is bringing whatever type of fight Jordan wants to bring. Jordan uses Iljas family to get the heat, saying he hopes Ilja knows how to tell his kid why he has to take care of daddy. Jordan is getting under Ilja’s skin and that is great.

Something to note was when Ilja went to the stairs to get in the ring, there was a fan with a Progress Wrestling shirt, and Ilja Vs Jordan happened on Progress Chapter 91 and the match is up there as a must-watch. I am excited for the match to happen on NXT UK.

Pretty Deadly is shown in the hallways walking as they prepare for the main event.

Amale is the first pure French women’s superstar of the WWE, and this vignette almost seems to prepare her to be in a face position. Amale means hope in Arabic and she is hope. Amale tells stories of before how she was a teacher, how her family didn’t want her to wrestle, they wanted law school or a bigger master’s degree for her. Amale talks about her first tryout and how that moment gave her hope in the industry that she belongs in. Amale got very emotional within this video and it tugs on the heartstrings as you can tell WWE means a lot to her. A very technically well-done video and it is worthy of a high rating like great. I am excited to see her flourish in the division.

Kenny Williams is shown in darkness by a place with graffiti almost in a shot to Mark Andrews and Subculture. Kenny claims Mark is a phony with his act of skateboarding. Kenny claims to be who he says he is. Claiming Mark is all that is left of subculture and once he gets rid of Mark, all that will be left is a culture of scum. The Promo did what it needed to do.

Sam and Sha both seem to be viewed as heels in the match, with Sha actually being cheered by the crowd, but this was just a technically good match. Started off slow, built up to more aggressive moments, the ending worked well being similar to an Eddie moment, Sam putting Sha’s scarf around his own neck to make it look like Noam was choking him. Nothing to complain about, but nothing to gush about. A match that doesn’t need to be skipped.

After doing some sort of “Job,” Gallus is shown talking as they put their stuff in the trunk of their vehicle. The Gallus boys are mocking the new trio of Die Familie: Charles Dempsey, Teoman, and Rohan Raja. They are really trying to make this feud seem like a gang war, which is unique and interesting. Joe Coffey Vs Charles Dempsey is teased and is official for the December 16th episode.

GOOD: Preview for Nathan Frazier Vs A-Kid next week:

A-Kid puts over the Cup saying it means a lot to him, and Nathan Frazier claims A Kid will play his game being very athletic. A-Kid says he is the present and challenges Nathan to step up. The preview makes you excited for their match.

Trent gets emotional before he makes his entrance, and Tyler hugs him. The crowd is pro-Moustache Mountain. Pretty Deadly’s ugly yellow attire adds to the fact that you aren’t supposed to like them. In order to not spoil a lot, this match was really good. There is nothing to particularly nitpick about it. Great tag team psychology from Pretty Deadly. Pretty Deadly is one of the best heel psychology tag teams in the world today. Moustache Mountain never have a bad match either. I regret not seeing their first tag match a few months ago. Building this up as Trent’s last chance really made sense for how the match turned out.

Results: Tyler Bate pins Lewis Howley after a Spiral Tap to both members of Pretty Deadly.

Overall this NXT UK didn’t have any “stinkers.” Some fun matches and a fantastic main event. All of the segments and promos made this show fly by, and there was nothing that felt out of place. What a great NXT UK to watch as I get back into this brand. Trent Seven proved more and more why he is truly underrated and congrats to Tyler Bate on making History as NXT Uk’s first Triple Crown.