Historic All Trans Femme Main Event At Paris is Bumping 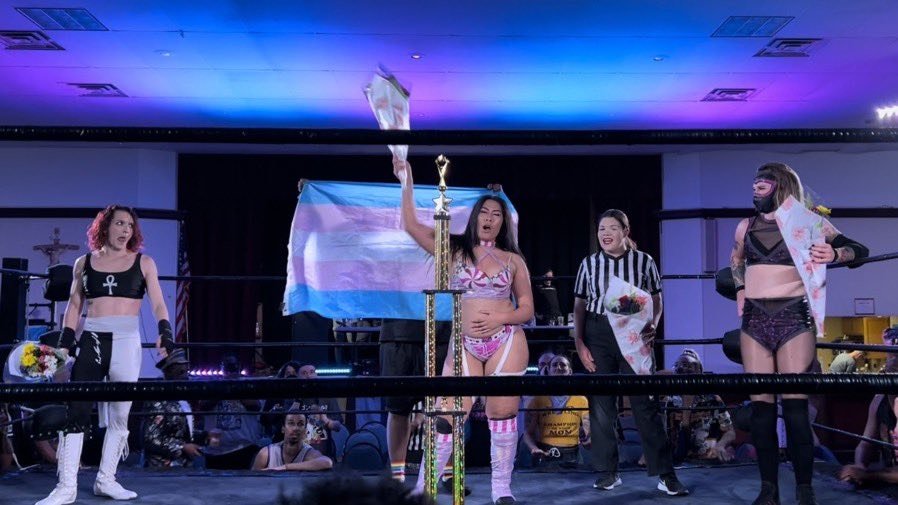 The category is: HERSTORY

This past weekend was the historic inaugural Pride and Vibe wrestling festival in Ridgefield Park New Jersey.

History was made on June 18th when the first-ever all-trans women’s main event occurred at the Paris is Bumping: Legends Ball show.  It was a fatal three-way match with DARK Sheik, Edith Surreal, Candy Lee, and Crystal Marrero as the referee.

It was a captivating and explosive match between three phenomenal women with Candy Lee taking the win and the PIB Grand Prize Champion Trophy.  This is the first time in professional wrestling history that the main event match was all trans femme.

Edith Surreal is a Philadelphia Pennsylvania native who won the inaugural Cassandro Cup tournament at last year’s Butch vs. Gore event.  She is best known for her tenure at Chikara and has appeared in other numerous promotions such as GCW and Beyond Wrestling among others.

DARK Sheik has dominated the independent wrestling scene for over twenty years. Along with running  Hoodslam, she is one of many pioneers of LGBTO+ wrestling. The High Priestess of the Church of Wrestling is best known for her appearance on many major independent promotions such as GCW.

Ref Crystal is based out of New York and is a student at T2T Wrestling Academy. She made her debut as a referee late last year and is an early star and household name in the making.

The encore presentation of the entire Pride and Vibe weekend will air on IWTV at a later date.