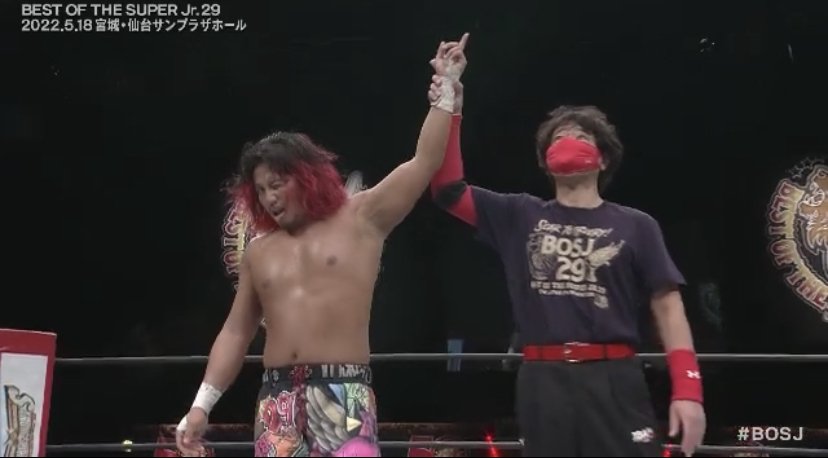 Overall, the show was really good definitely seen some clashes today that’s going to help some people further into this tournament. As for some people it’s going to be interesting seeing how they come back from a 0-2 situation and who will continue their luck with four points as for the ones with only Two points today they are still able to comeback from loses. Definitely enjoyed the main event as I would enjoy a rematch between those two and I can’t wait to see how this tournament continues.

Preview: Today we have the third night of Best of the Super Jr.  as this tournament continues on tonight, we have some killer A Block matches such as YOH Vs Clark Connors. Ace Austin looking for another Two points against Kanemaru. Alex Zayne Vs Sho. Ryusuke Vs Taiji Ishimori and main eventing is Francesco Akira Vs Hiromu Takahashi.

AVERAGE YOH Vs Clark Connors: The match starts with Both men going slow with some takedowns. As the match picks up Clark hits a nice shoulder bump before YOH follows it up to a kick to the knee then one to the face. Both men start exchanging Chops before Clark hits another shoulder Bump then follows it up with a snap suplex. Clark would continue to be beaten down hitting punches in the corner before going for a German suplex before YOH would try to reverse into a pin before Clark leans back and reversed it to a full Nelson after applying it for a moment he would hit another snap suplex. Looking for a spear YOH would counter with a Dropkick then a few forearms before hitting the ropes with a flying Forearm then a solid Neckbreaker. On the top rope now YOH would go for a move Clark moving out the way before hitting YOH with a misdirection Pounce. Clark would climb the ropes before YOH would hit a nasty Dragon screw on the top rope before hitting another Dropkick to the knee once he hits the ropes Clark hits him with a nasty spear. YOH would lock in a Grapevine knee bar before getting to their feet and hitting two German suplexs before Clark would hit YOH With a headbutt then a quick Powerslam. Clark would then go for Trophy Kill before YOH would hit a massive suplex on the knee before Clark hits a forearm before YOH catches him with 2 Superkicks and the Direct drive for the win.

AVERAGE Ace Austin Vs Yoshinobu Kanemaru: Match starts with Kanemaru going for a kick to jump ace, but ace caught him and took him down. Ace goes to the ropes before Kanemaru hits a kick then another side kick before taking the fight outside slamming Ace on the apron repeatedly. Kanemaru would go for an Irish whip before Ace would change directions then hit a Dropkick while Kanemaru was on the apron he would then go for a dive before getting caught and thrown on the apron then follow up with an apron Kick. Back in the ring Kanemaru has on a headlock on before hitting a shoulder block then reapplying it. Multiple times. Every time Ace would try and escape, he would apply it more. After a while he would begin to use the head scissors. As the match progressed Kanemaru would keep focusing on the neck not letting Ace get any advantage before finally getting some speed hitting a low knee kick then one to the back before following up with a Dropkick before using his Ace playing card to cut his hand then following with a Dropkick before hitting a kick on the apron following up with a Fosbury Flop. Back in the ring Yoshinobu would hit a nice back suplex continuing that work on the neck before hitting a DDT then a solid moonsault from the top. Ace would get the advantage slamming him down before drilling his Jaw into the floor before hitting a few kicks in the chest then the head before hitting the Fold and getting the victory becoming the first person in this tournament to have four points.

Result: Ace Austin wins by Pinfall via the Fold.

GOOD SHO Vs Alex Zayne: The Match would start with Zayne hitting a back breaker on SHO on the apron before hitting an awesome outside rope Hurricanrana. Match back in the ring after Alex hits some more innovative moves from an apron Hilo then a standing shooting star press turning into a senton. SHO would then grab a young lion and attack him drawing Alex to the outside before ending up hitting him with a chair while Alex checked on him. SHO would then use the leather turnbuckle wrap and choke Alex with it. Back in the ring SHO would focus his attention to the left arm attacking it with stomps and twisting it against the top rope.SHO would then hit a back elbow then a key lock back to the injured Arm. Alex would get back up and smack SHO across the face before fighting back and hitting a good lariat before hitting a Corner moonsault from the top rope without using the top rope. Back in the ring he would hit a summersault leg drop. Both men would hit the ropes and SHO would move the ref in the way before hitting a spear on Alex. Alex would then hit a sidewalk slam front flip before going for his Cinnamon Twist finisher, but SHO would have the knees up. SHO would grab his pocket wrench, but Alex would counter by sending SHO into Dick Togo before SHO locks in a armbar deeply before Alex would hit the ropes. SHO would go for the Piledriver before Alex would flip and turn it into the Taco Driver giving himself the Victory as he also moves on to four points.

BELOW AVERAGE Taiji Ishimori Vs Ryusuke Taguchi: Match starts with a lockup getting a good feel of things as Ryusuke goes for a headlock. As the match progresses, they both start to dance hilariously. After that Taiji would hit him in the gut then Rake his eyes before they both hit the ropes. Ryusuke would go for a hip attack before Ishimori would counter with atomic drop. Ishimori would then use the ring bell. Then would ram him into the ring post hitting his groin area. Ishimori would then drive him into an exposed ring buckle before getting back in the ring and locking in a ground submission. As Ishimori continues his assault, he goes for a sliding German he ends up Sliding out the ring where Taguchi hits a Crossbody from the top rope then hits a springboard hip attack. Then follows up with three Suplexs before hitting another hip attack then aiming for the ankle lock. Ishimori back on his feet hits the ropes and hits a handspring back kick. Then Ishimori would throw Taguchi into the corner and hit double knees before hitting the Bone Lock, but Taguchi would quickly hit the ropes for a break. After some moves Taguchi hits a huge side kick before going for a lungblower before getting countered by Taiji who goes for his own before that gets countered to an ankle lock which gets countered to the Bone Lock once again that gets repositioned to another ankle lock applying huge pressure on it. Ishimori would finally get to his feet and hit a jumping knee before both men start to do pinfall counters before Ishimori pulls down his pants then getting the victory with his final roll up gaining his four points.

Results: Taiji Ishimori wins by pinfall via Roll up.

GOOD Francesco Akira vs Hiromu Tanahashi: They both charge at each other with shoulder bumps before going to strikes immediately. After Akira hits a huge Dropkick sending him outside before going for a dive goes under the ropes then Hiromu goes for a sunset dive but gets turned into a Hurricanrana before getting back in the ring as Akira follows his counter up with a crossbody. Both men start to fight outside before Akira throws Hiromu to the ring post before taking it back to the ring. After he sets him up Hiromu into the corner in a reverse seated position before hitting a low Dropkick before applying the head scissors. Both men start to hit each other with chops before Akira gets hit with a Hurricanrana by Tanahashi. Hiromu would then hit a upside down choke with his legs before following it up with a Dropkick in the ring then a apron Dropkick on the outside of the ring. Back in the ring Hiromu hits a Falcon Arrow. Akira would get up and hit the ropes trying to get an advantage before getting hit with a Pop up Powerbomb. Both men would get up before Akira would catch him with a Superkick while being folded by the top rope. Akira would go for more offense before Hiromu would hit a Wheelbarrow counter before Francesco would come back and hit another move to take him down. As both men get to there feet they start to exchange chops and forearms before trading shotgun Dropkicks before Hiromu would hit a Death Valley driver into the corner. Hiromu would go for Time bomb but counted to a pinfall before going for a Hurricanrana but gets countered again to a Powerbomb then a pin after escaping Hiromu would go for a Superkick but Akira would hit one kick of his own then a Poisenrana before hitting his signature move speed fire. Then Akira would then hit a move called Ulitimo Akira before going for the Fireball before Hiromu duck would hit a huge slam for the two count. Both men would exchange thrust kicks before Akira would hit another kick himself then hits the ropes before Hiromu would hit a smashing Lariat. Back to there feet Hiromu hits a headbutt then a thrust kick then another Lariat before hitting Victory Royale then Time Bomb two to get his four points.

Overall, the show was really good definitely seen some clashes today that’s going to help some people further into this tournament. As for some people it’s going to be interesting seeing how they come back from a 0-2 situation and who will continue their luck with four points as for the ones with only Two points today they are still able to comeback from loses. Definitely enjoyed the main event as I would enjoy a rematch between those two and I can’t wait to see how this tournament continues.