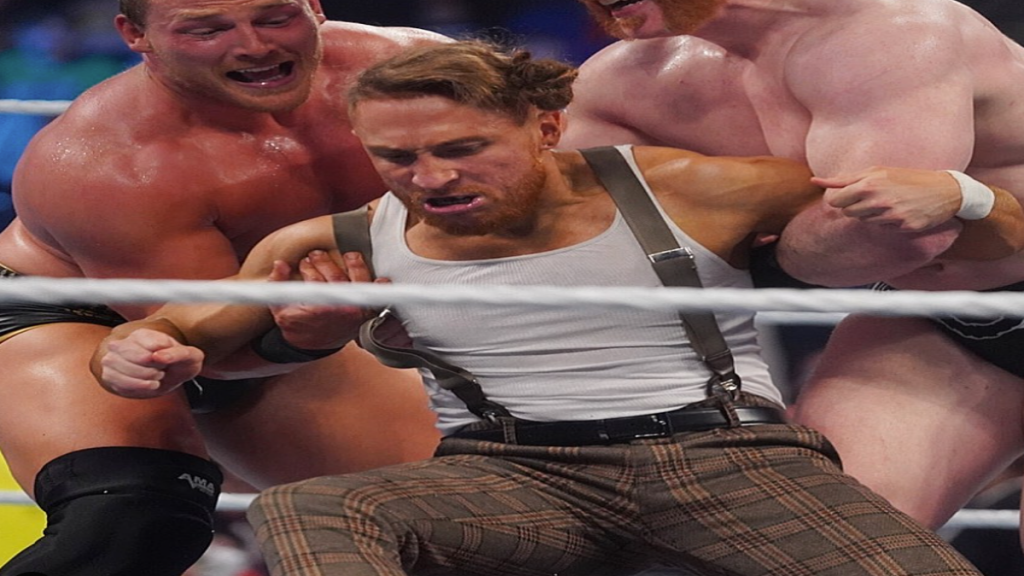 Tonight on Smackdown: Drew McIntyre and RK-Bro come face to face with Roman Reigns and the Usos. Will the Tribal Chief get revenge for last week’s attack? Kofi Kingston and Xavier Woods take on Sheamus and Ridge in a tables match. Who will be victorious in the latest iteration of this rivalry and will Butch make an appearance? The Boss, Sasha Banks, takes on Shayna Bayzler. Will Bayzler come out on top or will Friday night be “Boss Time”?

GREAT: what was supposed to be a match between Aliyah and Charlotte Flair took a turn when Charlotte attacked before the bell and complained that she was cheated out of a victory last week by Drew Gulak. Ronda Rousey then ran to the ring to rescue Aliyah and fight with Flair. Officials came to the ring to pry the two apart.

GOOD: Sasha Banks vs Shayna Bayzler. Banks controlled this one early on, targeting Bayzler’s hands but Bayzler was able to get back into it with the help of Natalya. After rolling up Banks, Natalya assisted the pin to get Bayzler the tainted victory. Banks and Naomi were attacked post-match trying to argue the loss but were able to fend off the attackers.

The Usos are interviewed backstage and promise to make a pair of snakeskin Air Force 1s after they beat RK-Bro and McIntyre at Wrestlemania Backlash. Afterward, Kayla Braxton interviewed RK-Bro who promised that they would defeat The Usos.

AVERAGE: Happy Talk started with Madcap Moss taking shots at Happy Corbin over the big screen. Corbin called Moss a coward and challenged him to come to the ring and insult him, which Moss did. After more insults by Moss, Corbin left the ring with his tail between his legs.

SQUASH – Gunther vs Drew Gulak. Gulak got in a couple of punches but a few massive chops and a powerbomb from Der Ring General finished off Gulak.

In a backstage interview, Shinsuke Nakamura promises to get revenge on the Bloodline for what they did to himself and Rick Boogs. Meanwhile, Sami Zayn watches from the background.

In an interview with Kayla Braxton, Drew McIntyre says that he wants to fight Roman Reigns later in the evening.

GREAT: Xavier Woods and Kofi Kingston vs Ridge and Sheamus in a Tables Match. Kingston and Woods nearly put Ridge through a table early on for the win but Sheamus moved the table at the last second. Kofi Kingston took a risk and jumped from the corner of the ring onto Sheamus and through the barricade. Sheamus looked like he was gearing up to slam Kingston through a table outside the ring but chose to slam Kingston on the side of the ring instead. Just as Kingston and Woods were arranging Sheamus on the announcer’s table, Butch emerged from under the table to attack the members of the New Day. This turned the momentum of the match in favor of Ridge and Sheamus, who combined to put Xavier Woods through a table in the middle of the ring.

Sami Zayn interrupts Kayla Braxton’s interview with Paul Heyman to propose some sort of alliance between Zayn and the Tribal Chief. Later on, Adam Pearce responds to Zayn’s request for a match with Nakamura next week by telling Zayn he can have a match tonight.

GREAT: part five of the Lacey Evans story features the loss of her father to overdose and the attempted suicide by another family member. Evans says she didn’t allow this to bring her down and won’t let anyone in the locker room stop her. The segment finishes with Evans entering the arena to applause from the fans.

AVERAGE: Sami Zayn vs Shinsuke Nakamura. Zayn gained some momentum early on with a Michinoku Driver but Shinsuke responded by reversing a corner move by Zayn. Nakamura locked Zayn into an armbar and nearly forced the tapout but Zayn rolled up Nakamura to break the hold. The two got caught up fighting outside the ring and Zayn was able to beat the count for a countout victory.

GREAT: The Bloodline, Drew McIntyre, and RK-Bro. The trio of McIntyre, Orton, and Riddle started by acknowledging facts about themselves, their past, and what they hoped to do on Sunday at Wrestlemania Backlash. The Bloodline then made their way to the ring to brawl with their Wrestlemania Backlash opponents. Orton and Riddle took out the Usos with a couple of RKOs and McIntyre took out Reigns with a Claymore.

Overall, this was a good episode of Smackdown. The highlight of the night was the Tables Match between Sheamus and Ridge against Kofi Kingston and Xavier Woods. The Unholy Trinity was victorious thanks to assistance from the returning Butch. Charlotte Flair was supposed to have a match with Aliyah but it quickly turned into a fight with Ronda Rousey, in a preview of Sunday’s “I Quit” match. Sami Zayn was able to eke out a countout win against Shinsuke Nakamura after making a deal with Paul Heyman. Shayna Bayzler won her match against Sasha Banks, with interference from Bayzler’s partner Natalya. Banks and Naomi got the last laugh as they came out on top in a post-match fight. Drew Gulak continues to rotate between different roles, this week returning to the ring as a competitor. He faced off against Gunther, who made quick work of Gulak and perhaps sent the message that Gulak is better off outside the ring. Lacey Evans continued to tell her life story and this culminated in her entering the arena to the cheers of the WWE universe. And to end the show, Drew McIntyre, Randy Orton, and Riddle poked fun at Roman Reigns by doing some acknowledging of their own. The Bloodline did not take kindly to this and came to the ring to fight with the trio. A pair of RKOs and a Claymore left the team of McIntyre and RK-Bro as the last men standing in the ring.