“Great Opening And Main Event Matches, But Rushed Builds And Matches To Under Siege” Impact Wrestling 5/5/22  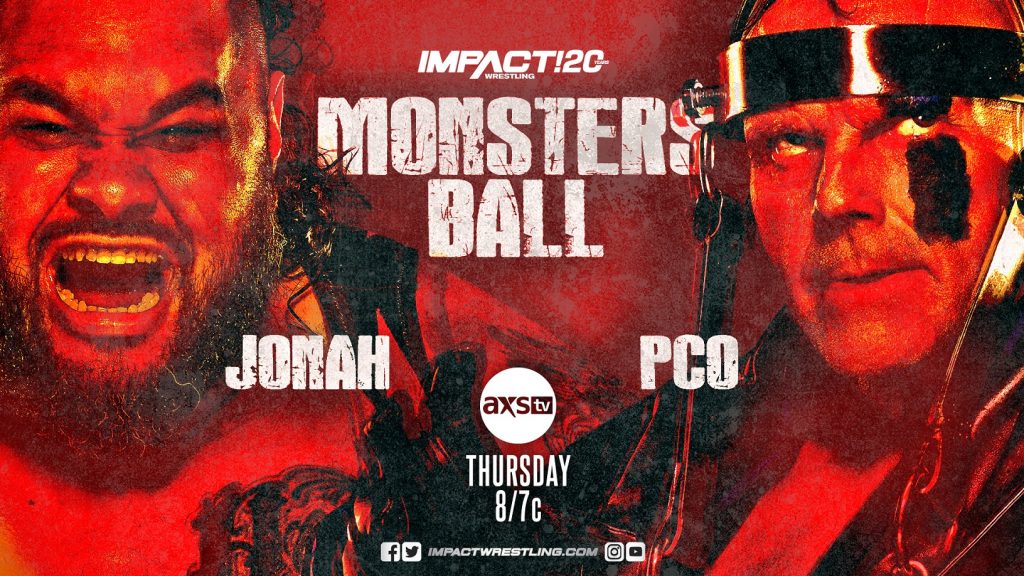 Preview: Tonight’s go home edition of Impact consists of a monster ball match as JONAH and PCO square off once more. We also have Tomohiro Ishii and Steve Maclin square off. Plus, W. Morrissey finally gets his hands on Brian Myers and much more. Enough reading, let’s read more as the review starts.

We get a recap video of the main event from last week.

GREAT: The show opens up as W. Morrissey goes one on one with Brian Myers in a tables match. The match begins as the two lock up. Myers gains the advantage by applying some strikes and kicks to Morrissey, but gets hit with a big boot by Morrissey. Matt Cardona and Chelsea Green come to the ring to assist Myers. The Major Players double team on Morrisey. Just as the Major Players begin to set up and attempt to put Morrissey through a table, but miss. Suddenly, Jordynne Grace appears to even the odds as Grace beats up Matt, allowing Morrissey to put Matt through the table. Chelsea is forced to retreat as Grace goes after her, leaving Myers and Morissey all by themselves. They soon brawl, but it all comes to an end as Morrissey powerbombs Myers on the top rope, putting Myers through the table on the outside to get the win.

Results: W. Morrissey puts Brian Myers through a table to get the win

Cut to backstage where Rich Swann and Willie Mack are interviewed for their upcoming match against Bullet Club later on. The two say some things, but before they can say anything more, the Major Players interrupt them as they’re seeking help for Myers, but the groups argue and continue it behind the scenes.

GOOD: Up next, Rocky Romero goes one on one with Ace Austin for his X-Divisions championship. The match begins as the two lock up. Rocky twists Ace’s arm, but Ace escapes and gets attacked with a chop fest. Rocky puts Ace in a headlock, but escapes and gets kicked in the head by Rocky. Ace soon puts Rocky down and trash talks Rocky, but Rocky pokes Ace. Ace soon takes advantage as he applies some chops, followed by a chop by Rocky. Ace rams Rocky in the mid-section, but Ace stops Rocky. Ace once again chops him, but Rocky goes for a running dive on Ace as Ace tries to get counted out. Rocky uppercuts Ace, but Ace does some flippy dodges, followed by a running kick on Rocky outside the ring. Ace awaits for Rocky in the ring, but Rocky suckers Ace back outside the ring, followed by a hurricarana outside the ring. Rocky puts Ace back in the ring and applies a tornado DDT on Ace. Rocky goes for sliced bread on Ace. Rocky tries to go for a double stomp, but Ace dodges it, but Rocky soon puts Ace in the submission but Ace reaches the ropes to break the hold. Rocky tries to go for a move, but Ace goes for a kick on the head and goes for a running move with a roll up to get the win. After the match, Trey Miguel comes out as he wants a piece at Ace, but Ace retreats. Trey soon gets a mic as he has announced his rematch for the championship at Under Siege.

Cut to backstage where Josh Alexander is asked his thoughts on facing Tomohiro Ishii. Josh explains if he wants to continue being champion, he needs to defend it against the very best. Josh explains he will be watching Ishii’s match later and informs Ishii that he will not win.

SQUASH: Up next, Masha Slamovich goes one on one with Damaris. The match begins as Masha chokes Damaris in the corner, but Damaris tries to fight back, but Masha suplexes Damaris. Masha applies a few moves and uses the Snow Plow to get the win.

Result: Masha Slamovich pins Damaris to get the win.

GOOD: Up next, Bullet Club (Chris Bay and Jay White) goes up against Rich Swann and Willie Mack. The match begins as Rich and Chris lock up. Chris attacks Rich in the corner, but Rich follows up with some strikes and a kick to the face. Mack tags in and the two double team on Chris. Mack knees Chris in the back, followed by a neck breaker. Mack tags in Rich and double team on Chris. Rich kicks Chris in the mid-section, but Chris puts Rich on the outside the ring, allowing Jay to kick Rich on the back of the head while the referee is distracted. Jay tags and throws Rich outside, allowing Chris to beat up Rich while the referee is distracted.Chris tags in and throws Rich out the ring, but Rich fights back and tries to reach for the tag, but gets stopped by Bullet Club. Chris tries to stop Rich as he goes for a move, but Rich stops Chris and tags in Mack. Mack goes for several tackles on both Chris and Jay, but gets stopped by Jay. Bullet Club try to double team on Mack, but Mack rams through the two. Rich goes for bread and butter on Chris. Mack goes for a spinebuster on Jay, but Chris suplexes on Mack, allowing Jay to use the art of finesse on Mack to get the win. After the match, Honor No More appears to beat up Jay and Chris. But then, the rest of Bullet Club appear to even the odds. It ends with Bullet Club standing tall.

Result: Jay White pins Willie Mack to get the win for his team.

Cut to backstage where Tasha Steelz and Savannah Evans are talking to each other, but Decay traps them into their delusional room where each member of Decay try to haunt the two, but Rosemary captures Savannah, while Havok lets Steelz know that it’s over for her.

We get a video package of Deonna Purrazzo versus Taya Valkyrie.

GOOD: Up next, Steve Maclin goes one on one with Tomohiro Ishii. The match begins as Steve locks up Ishii, but escapes. Steve tries to tackle Ishii but doesn’t budge. Ishii tries to tackle Steve but Steve doesn’t budge. The two unleash several strikes to each other, but Ishii runs over Steve. Ishii avoids an attack by Steve and suplexes Steve in the process forcing Steve to go outside the ring to re-strategize. The match continues as Ishii and Steve continue to strike each other as the two are at a stalemate. Ishii puts Steve in the corner, but Steve puts Ishii down. Steve jumps and applies his knees on Ishii’s back, followed by Steve attacking Ishii’s back. Steve hurts Ishii’s back on Steve’s knee. Ishii goes for some chops, but Steve smacks Ishii off and tries to pin Ishii but Ishii kicks out. Steve puts Ishii in a headlock, but Ishii reaches the bottom rope, breaking the hold. Ishii tries to fight back, but Steve strikes Ishii back down. Steve throws Ishii in the corner, but Ishii goes for a belly to back suplex on Steve. Ishii applies several chops in the corner to Steve. Steve yells at Ishii as he wants more. Ishii throws Steve in the corner again and goes for a running attack on Ishii and puts Steve on a hold, but Steve turns it into an olympic slam and applies the boston crab on Ishii. Ishii reaches the bottom rope, breaking the hold. Ishii starts fighting back, but Steve chops Ishii in the face, followed by Ishii suplexing Steve. Steve hits Ishii with a german suplex, followed by a clothesline. Ishii headbutts Steve, followed by a clothesline. Ishii applies the brainbuster to get the win.

Result: Tomohiro Ishii pins Steve Maclin to get the win.

We get one last run down of the card at Under Siege.

GREAT: And now it’s time for the main event as JONAH goes one on one with PCO in the monster ball match. The match begins as the two first brawl throughout the backstage area. PCO applies some strikes, followed by JONAH smacking PCO down. JONAH rams PCO in the wall. The brawl continues to the ramp by the ring as PCO tries to strike down JONAH and goes for a chokeslam, but JONAH stops PCO and continue applying some strikes to each other. PCO applies some strikes to JONAH, but JONAH fights back as the two begin getting closer to the ring, but JONAH suplexes PCO on the ramp of the arena. The match continues as JONAH and PCO strike each other with some steel chairs. JONAH smacks PCO with a silver tray, followed by hitting PCO with a chair once more. JONAH hits PCO with a trash can lid, and tries to hit PCO on top of chairs, but PCO fights JONAH up in the corner. PCO applies the hurricanrana on JONAH as JONAH lands on the steel chairs. JONAH smacks PCO with a sledgehammer to the head and neck. JONAH hits PCO with a trash can lid. JONAH shoves PCO’s head in the steel chair. PCO fights back, but JONAH shoves his thumb in PCO’s eye. JONAH spears PCO through a pile of steel chairs. JONAH and PCO apply several strikes to each other, but JONAH suplexes PCO into the corner on top of a ladder. JONAH gets out a table in order to finish off PCO. JONAH gets ready to put PCO through, but PCO fights back. JONAH tries to pick up PCO, but PCO escapes. PCO applies some more strikes, followed by a DDT into the trash can. PCO goes for a running dive on JONAH outside the ring. PCO brings JONAH back into the ring. PCO goes for a deanimator on JONAH’s head on the side of the ring. PCO goes on the top and goes for the leg drop on JONAH. PCO rams JONAH’s head through the steel chair in the corner. JONAH slams PCO through a pile of steel chairs but gets right back up. JONAH superkicks PCO as he gets back up. JONAH gets some thumb tacks and powerbombs PCO into the tacks, but PCO still kicks out as JONAH tries to go for the pin. JONAH tries to go up in the corner, but PCO fights back. JONAH stops PCO, but PCO smacks JONAH with a sledgehammer, making JONAH goes through the table that JONAH himself set up. PCO goes for a PCOsault on JONAH to get the win. The show ends with PCO standing tall.

Result: PCO pins JONAH to get the win.

Overall, Impact did a good job with tonight’s show. The best matches on the show were both the opening tables match, and the monster ball match as the main event. Every match did a good job to progress stories or continue feuds with others. However, even though the structure and matches were great, it’s not making Under Siege as exciting as Impact is making it be. Don’t get me wrong, some of the matches on the card could be pretty good, but the matches could’ve been far better if there was enough time for the build. Had these matches not been rushed, Under Siege might’ve been far more interesting as the stories could’ve made the matches feel far more exciting. Aside from that, tonight’s go home edition of Impact was good. Find out next time as we prepare for Under Siege.