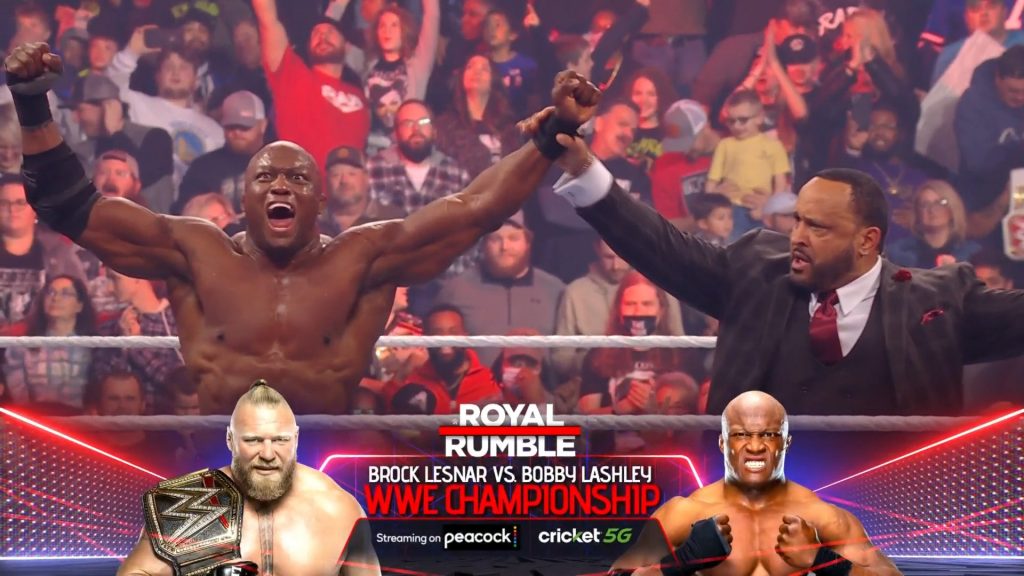 Last week’s episode of Raw served to be a good ending to 2021. A lot of good in ring action served as a fun standalone show and a good go home show to WWE’s first PPV of 2022: Day 1. With Day 1 in the rear view mirror and Monday nights having a beast as their WWE champion once again, how will this shake up the new year? Let’s find out!

MUST WATCH: The show kicks off with the lights going out and they come back on to reveal Paul Heyman. Heyman reveals that he’s once again the agent for Brock Lesnar. He introduces the new WWE champion, who throws stairs into the ring as a makeshift podium. Paul reveals he pulled the strings to get Brock into the WWE title match at Day 1. He puts over everyone in the fatal four way number one contenders match tonight, as well as tells Roman Reigns that karma is a bitch. This was an excellent segment to start the show with.

GOOD: RKBro is backstage as Riddle rides in on his scooter. Riddle reinforces the point that he should be more like Randy and Randy tells him to keep up the momentum against Alpha Academy.

AVERAGE: Up next is Alpha Academy vs RKBro. Before the match Gable has a promo where he says Alpha Academy is going to dominate with the four most dangerous letters in sports entertainment: OTIS. Overall, this was a fun little match to open the show with. Otis eventually picks up the win after reversing Riddle’s RKO attempt into a slam for the win.

AVERAGE: Omos is quickly interviewed backstage about his match with AJ Styles. He simply palms Kevin Patrick’s face and says nothing.

SATISFACTORY: Up next is a mixed tag team match for the 24/7 championship as Dana Brooke and Reggie take on Tamina and Akira Tozawa. Tozawa accidentally runs into Tamina and kicks her off the apron. Reggie then pins Tozawa after hitting his front flip splash. This match existed. Moving on.

GOOD: Up next Becky Lynch comes out and talks about how the new year brings out a new side of people, but no one is better than Big Time Becks. Liv Morgan eventually comes out and wants another shot at the Raw women’s title. Bianca Belair comes out and says that she and Becky have unfinished business and tells Liv to get lost. Becky lets the two get into it, but they team up to take out Becky. The two then start fighting each other until Becky comes in, hitting Liv with the Manhandle slam.

GREAT: Kevin Owens and Seth Rollins are backstage and KO has a new plan for him and Seth. Whoever wins the fatal four way gets Brock at the rumble. So, KO says if one of them wins tonight and beats Brock at the rumble then they can face each other at Wrestlemania. Seth likes the plan, but KO thinks he’s lying.

AVERAGE: up next we get The Mysterios and the Street Profits declaring for the royal rumble match.

AVERAGE: Up next is a tag match as the Street Profits take on Apollo Crews and Commander Azeez. This was another decent match. The Profits win after Montez hits Crews with From the Heavens.

AVERAGE: Doudrop bursts into Pearce and Sonya’s office and is upset that Bianca and Liv keep asking for opportunities while women like her don’t get anything. She demands an opportunity and Deville gives her one. Next week will be Doudrop vs Bianca vs Liv where the winner goes onto face Becky Lynch at the Royal Rumble.

GOOD: Up next is Damian Priest vs Dolph Ziggler for the United States championship. This was a really fun match between these two, especially with the added stipulations that Priest couldn’t be counted out or disqualified or he loses the title. Roode comes out and tries bringing out the evil side of Damian. Priest gets a chair and goes to hit Ziggler, but comes to his senses and hits Roode instead. Ziggler capitalizes and hits the Zig Zag, but only gets a 2. Priest eventually hits the Reckoning for the win.

GOOD: Vince McMahon is in his office when Austin Theory comes in. He asks for a rematch against Finn Balor, but Vince reminds me he lost last week. But, he says he redeemed himself by attacking him backstage. As a show of thanks, he says that Theory will have a spot in the royal rumble match.

GREAT: Miz and Maryse come out and say that Edge winning at Day 1 was a fluke. Maryse says that if Beth Phoenix came out she would hit her. Both Edge and Beth come out and run down Miz and Maryse. They officially challenge them to a mixed tag match at the Royal Rumble, to which Miz accepts. Maryse, however, is not too keen on this idea. Beth teases punching her and she flinches to end the segment.

GREAT: Big E is interviewed backstage about going to win his WWE title back. Big E cuts an impassioned promo about how his title reign meant a lot to a lot of people and he let those people down. But tonight is the first step to getting his title back.

GOOD SQUASH: Up next is AJ Styles vs Omos. This was a good squash match for Omos and getting a clean victory over AJ is HUGE for his career.

GREAT: Finally we have the main event fatal 4 way between Kevin Owens, Seth Rollins Big E and Bobby Lashley where the winner gets a wwe championship match at Royal Rumble. Bobby Lashley is very over in this match and he has a fun spot where he goes to hit Seth and Ko with the barricade spear, but misses and goes through the barricade himself. Big E is also put through the announce table by Seth and KO. Seth and KO are eventually chased into the stands and far into the arena by Big E and Lashley and the fight continues. They go as far as to uranage Owens through a merch table. Kevin Owens has an excellent spot where he does a dive from the crowd onto his opponents below. Lashley eventually hits the spear for the win. Post match, the show ends with Brock Lesnar telling Roman Reigns he’ll be at Smackdown this Friday.

Overall, Raw this week was definitely a step down from last week’s show. Not a lot of great in ring action this week, mostly consisting of average tag team matches. The show did have its bright spots, though and that made the show worth watching at times. Segments like the Brock Lesnar segment, Priest vs Ziggler and the main event were the highlights of the show no question. Not the best outing for the first show of 2022, but a good show, nonetheless.