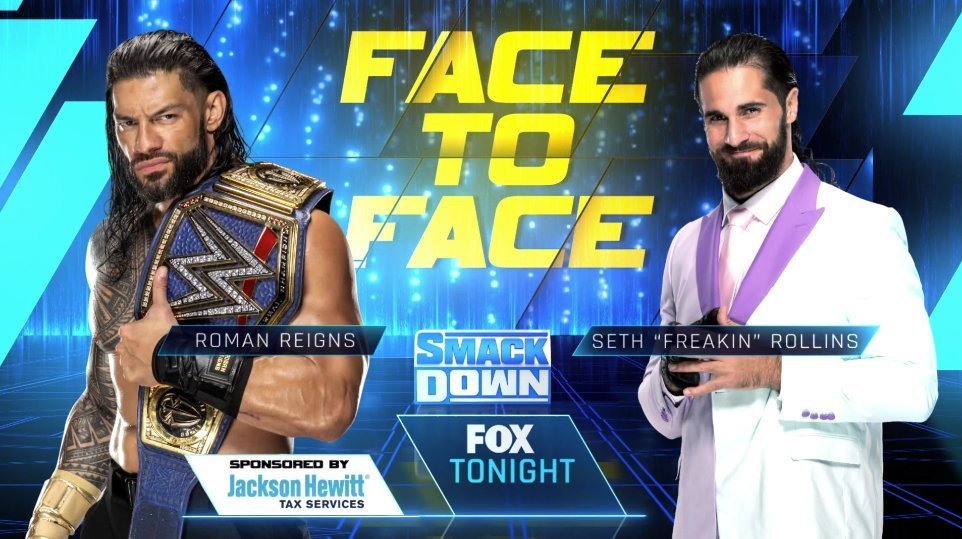 Last week’s episode of SmackDown definitely had its high and low points. The exchange between Roman Reigns and Brock Lesnar was excellent and the Usos & New Day street fight was a lot of fun. However, other parts of the show suffered by comparison. With Roman Reigns set to come face to face with his Royal Rumble opponent Seth Rollins and the return of Lita tonight, how will the blue brand bounce back on the road to Wrestlemania? Let’s find out!

GOOD: The show kicks off with the Usos. They talk about beating the New Day last week in a street fight and look ahead to future challengers. They announce a fatal four-way tag team match with championship match implications and hilariously introduce the competitors which leads to our next match.

GOOD: We have our first match of the evening as Cesaro and Mansoor, Jinder Mahal and Shanky, The Viking Raiders and Los Lotharios face off for a future tag team title shot. This was a really fun match to start the show with and a good showcase for the tag division. The Viking Raiders win after hitting Angel with the Viking Experience. Post match the Usos cut a quick promo running down the Raiders.

AVERAGE: Sonya Deville is backstage when Naomi shows up. She’s pissed about Sonya costing her her match last week against Charlotte and just wants an explanation as to why Sonya doesn’t like her. Sonya simply says she doesn’t like Naomi’s brazen attitude and as long as she wears her suit, Naomi can’t touch her.

GREAT: Sami Zayn comes out for his newest segment “In Zayn.” He discusses all of the injustices against him and talks about Johnny Knoxville being officially entered into the Royal Rumble match. Sami says that Knoxville can’t do anything he can, but Sami can do anything Knoxville can. What does this entail? Sami puts himself in a shopping cart and displays a ramp in front of the ring. He says he’s going to ride the ramp into the ring, a la a classic stunt from Jackass. Zayn is very reluctant to do the stunt, however, and continuously makes excuses to not do it. Rick Boogs eventually shows up to distract Zayn, who turns around to eat a Kinshasa from Shinsuke. The segment ends with Boogs throwing Zayn out of the ring and through his crash pad. This was a surprisingly fun segment and I thoroughly enjoyed this.

AVERAGE: Aliyah is interviewed backstage about having her first singles match on Smackdown. She says she’s excited for the opportunity and says she’ll try to not embarrass herself again. Natalya shows up and says there’s no shame in losing to the best of all time. She puts over her legitimate world records, to which Aliyah says she had no clue the Guinness book of world records was still a thing.

AVERAGE: Natalya has an interview of her own, continuing to put over her three Guinness world records and says she’s the favorite to win the Royal rumble. She finishes by saying she’s going to set a new record, the quickest victory of any women’s match.

POOR: Up next is Natalya vs Aliyah. Natalya beats down Aliyah before the match, trying to ensure she breaks that record. Aliyah is unable to continue, however she’s immediately cleared to compete making all of this pointless. Aliyah immediately rolls up Natalya and officially “breaks” the record at 3.17 seconds. This was not the worst way to execute this segment, but the execution was still very poor.

GREAT: Up next we’re joined by WWE hall of famer Lita. Lita is asked why she’s here tonight and she runs down the many accolades she’s acquired over her career. She says she was satisfied with her career, but she’s never won the women’s royal rumble. Lita says she might have one more run left in her. Charlotte Flair comes out and runs down Lita for being a has been. She says she’s going to ruin Lita’s short-lived comeback. Charlotte reminds everyone that she beat Trish Stratus at Summerslam a few years ago and ended her comeback. She says she’s going to do the same to Lita, who retaliates by hitting the twist of fate.

GOOD: Sheamus is interviewed backstage about his upcoming match with Ricochet. He says that Ridge Holland, his protege, should be standing beside him right now but can’t because of the injury Ricochet gave him. For this, Sheamus is gonna make him pay.

GOOD: Up next is Ricochet vs Sheamus. This was a fun match between these two and Sheamus continues to never disappoint. The finish sees Ricochet go for a handspring and gets caught with the Brogue kick.

GOOD: Adam Pearce and Sonya Deville are backstage and complain about the thermostat not working. Pearce goes to check with the maintenance guy and Sonya takes off her jacket. Naomi then walks in and, since Sonya isn’t wearing her jacket, Naomi says she can finally get her hands on her. Pearce comes and breaks it up, however, and Naomi complains about being screwed in her match against Charlotte last week. Adam agrees and gives Naomi a rematch against Charlotte for next week.

GOOD: Kofi Kingston comes out and gives a royal decree on behalf of King Woods. He announces that Woods is injured and will be missing the royal rumble match, however a coffee will enter the match on behalf of Woods’ kingdom. Happy Corbin and Madcap Moss come out and run down Kofi. They talk about injuring Drew McIntyre and look to do the same to Kofi.

AVERAGE: Up next is Madcap Moss vs Kofi Kingston. This was a fine match but definitely the weakest match on the show. Moss eventually wins after a thumb to the eye followed by the Punchline neck breaker.

MUST WATCH: finally we have the face off between Roman Reigns and Seth Rollins. Seth goes to do the trademark Shield fist bump, but Roman says that’s now beneath him. Seth says that for his entire career, Roman has had to be helped along to get to where he is, whether that be from the bloodline or Seth himself. Roman finishes by saying that if he wanted to face a megastar at the Royal Rumble, he’d face Seth’s wife. The Usos come in to try and attack Rollins, but Seth escapes to end the show.

Overall, this was a good episode of Smackdown. The opening tag match was fun, Sheamus and Ricochet was enjoyable and the face off with Rollins and Reigns was great. However, moments like Kofi and Madcap were just ok and the Natalya- Aliyah stuff was…rough. A few bumpy patches but a good enough show.