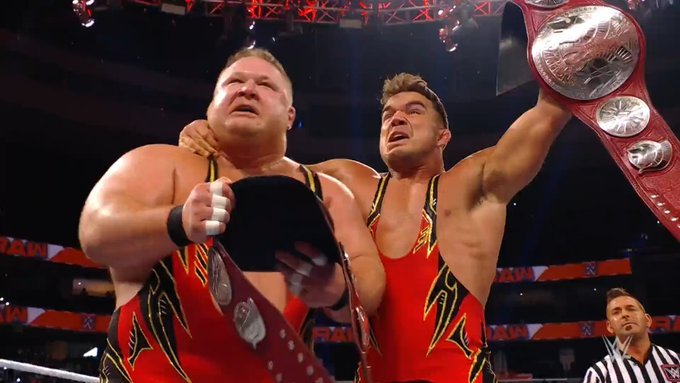 Last week’s episode of Raw was a good start to 2022 for WWE. An excellent Brock Lesnar segment and a banger fatal four way main event made last week’s show enjoyable for the most part. With Brock Lesnar and his Jew Royal Rumble opponent Bobby Lashley set to meet face to face tonight, what twists and turns will happen as we get closer to the Road to Wrestlemania? Let’s find out!

MUST WATCH: The show kicks off with the WWE champion Brock Lesnar. Bobby Lashley watches from the monitor, but gets interrupted by Cedric Alexander and Shelton Benjamin. They’re happy that the Hurt Business is back together, but Lashley tells them it’s not and tells them to get lost. Lashley goes to interrupt Lesnar and says that he’s going to beat Lesnar at the rumble for the WWE title. Lesnar destroys Lashley, calling him irrelevant and nowhere near his radar. Brock leaves as Cedric and Shelton try attacking Lashley, but to no avail as the Almighty decimates them.

GOOD: Riddle is backstage trying to unlock his inner viper when Randy Orton shows up and tells Riddle that not tagging him last week is what led to their loss. He gives Riddle a very simple plan: tag in Randy.

AVERAGE: Damian Priest is with the Street Profits as they discuss their upcoming six man tag team match. Not much to say here but nothing bad.

GOOD: Bianca Belair has a backstage promo saying that she’s going to win the triple threat match tonight and end Becky Lynch’s 26 seconds of fame at the Royal Rumble.

AVERAGE: Up next is a six man tag team match as Damian Priest and the Street Profits vs the Dirty Dawgs and Apollo Crews. This was a fine match between these six men and the heels picking up the win was a bit shocking. The finish sees Dolph hit the zig zag on Angelo for the win.

GOOD: Up next Seth Rollins graces us with his presence and says that he’s excited for the Royal Rumble because he’s going to beat Roman Reigns for the Universal title. He says that he’s undefeated against Roman Reigns on PPV and that won’t change. Big E comes out and says that after he wins the royal rumble, he’s going to face Rollins at mania for the title. This eventually leads to Big E challenging Seth to a match, to which Rollins accepts.

GREAT: Immediately after we have Big E vs Seth Rollins. This was a great match between these two. Rollins eventually gets the clean win after hitting the curb stomp in a great match.

SATISFACTORY: Rhea Ripley and Nikki A.S.H. are in the ring and discuss the future of their partnership. Nikki wants to challenge again for the tag titles, but Rhea wants to end their tag team. The two have an awkward back and forth for a few minutes until Nikki agrees to end the team. The two hug and stay friends until Nikki suddenly attacks Rhea! This is an interesting development and this was the only highlight of an otherwise mediocre segment.

AVERAGE: Reggie and Dana Brooke are backstage eating food when R Truth and Akira Tozawa, once again, show up to try and win the 24/7 title. The two escape, but Reggie runs into Omos, literally. Omos almost decimates Reggie, but Dana stops him. This will lead to a match between the two next week.

GREAT SQUASH: up next is Omos vs a local competitor. This was a great showcase for Omos.

AVERAGE: Doudrop cuts a promo about the triple threat match tonight. She says that she’s been overlooked for far too long and this is her chance to finally make a name for herself.

GOOD: Up next is the Cutting Edge with special guest Beth Phoenix. Edge plays a video package hyping up his wife. The two have playful banter until the Miz and Maryse come out and interrupt. Miz plays a video package of his own about Maryse in retaliation. Beth says that ever since she came back to Raw, Maryse has been quiet. Maryse leaves and Beth says that if Edge doesn’t get to him first, she will have no problem knocking Miz’s teeth down his throat.

AVERAGE: Austin Theory is interviewed before his match with AJ Styles. Theory says that this match is important because this is his chance to impress Mr. McMahon.

AVERAGE Up next is AJ Styles vs Austin Theory. This was a good match between these two until the end. The finish sees AJ go for the phenomenal forearm, but gets taken down by Grayson Waller, causing the DQ. Post match Theory takes a selfie with AJ as AJ and Waller brawl. AJ chases off Grayson to end the segment.

AVERAGE: Waller is interviewed backstage after attacking AJ and says that tomorrow he’s going to experience the Grayson Waller effect.

GOOD: Liv Morgan cuts a promo before the triple threat match and says that it may be a new year, but she’s still got the same intention and that’s to become the new Raw women’s champion.

AVERAGE: Alexa Bliss is in a therapist’s office where a therapist attempts to “fix” Alexa. He plays the video of Lily being destroyed and this sets off Alexa, who destroys his office.

GOOD: Finally we have the main event where Liv Morgan takes on Doudrop and Bianca Belair in a triple threat match. The winner faces Becky Lynch for the Raw women’s title at the Royal Rumble. Before the match Becky cuts a quick promo saying that all three women are great, but  it doesn’t matter who wins as she’ll run through any one of them. This was a really solid main event. All three women looked good in this match, especially Liv who added some new impressive moves to her repertoire. The finish sees Bianca hit the KOD on Liv, but Becky pulls her out of the ring. The two fight as Doudrop flattens Liv and picks up the win. Post match, Becky slaps Doudrop and goes for the Manhandle slam, but can’t get her up.

Overall, Raw was enjoyable for the most part. The first hour was very fun with Brock and Lashley having a fun exchange and Alpha Academy winning the tag titles. The show also had an enjoyable match between Seth Rollins and Big E as well as a great women’s main event. The middle dragged at times but there was enough on the show to make it entertaining.