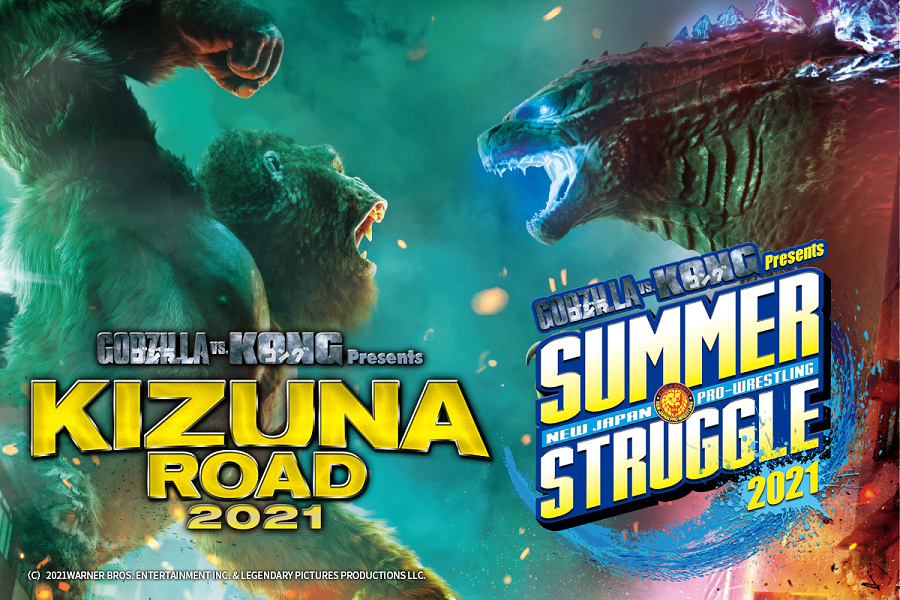 A colossal sponsor for NJPW has been featured on NJPW Kizuna Road and Summer Struggle.

The Warner Brothers and Legendary Pictures production will premiere in Japanese cinemas on July 2, and the film will serve as the title sponsor for the next two NJPW trips to commemorate the occasion. Below is the full statement from NJPW about the sponsor.

“As the summer gets started in New Japan Pro-Wrestling, titanic struggles are set to erupt in the cerulean blue through the Kizuna Road and Summer Struggle tours. What better collaboration then, than with the titanic kaiju clash of Godzilla vs Kong?”

“The Warner Brothers and Legendary Pictures production opens in Japanese theaters on July 2, and to celebrate, the movie will be the title sponsor for the next two NJPW tours. Could a kaiju invasion even happen at event venues?”

“Plus check out this amazing event poster, imagining Red Shoes Unno officiating a main event even harder than your average BULLET CLUB brawl! EVIL matches should be a walk in the park after this!”

Kizuna Road will also have the top two young lions in their roster, Yota Tsuji & Yuya Uemura, going on a full gauntlet facing top stars in NJPW. the two have been seeking for any other chance to compete against the New Japan team. Each guy will have five chances to shatter gauntlets in the following evenings at Korakuen Hall.

On June 22 and 23, the Kizuna Road tour will feature big championship action, with the NEVER 6-Man and IWGP Junior Heavyweight Tag Team Championships on the line.

The NEVER Openweight 6-Man Tag Team Championships will be on the line in the main event of night six on Kizuna Road, as the CHAOS side of YOSHI-HASHI, Tomohiro Ishii, and Hirooki Goto defend their titles for the sixth time against the BULLET CLUB side of EVIL, Yujiro Takahashi, and Dick Togo.

The IWGP Junior Heavyweight Tag Team Championships will be on the line in the main event of Night Seven of Kizuna Road on June 23, as SHO and YOH, Roppongi 3K defend their titles against El Phantasmo and Taiji Ishimori. Roppongi 3K won the IWGP Jr. Heavyweight Tag Team Championships on January 5, 2020, ending ELP and Ishimori’s six-month reign, although the two teams didn’t meet again for the following 17 months due to Ishimori’s pandemic seclusion and YOH’s knee injury.

Stay tuned for more updates about Kizuna Road & Summer Struggle on Wrestling Republic Website. We’ll for sure make a review for both tours when they’re on!!