From Legend Killer To Legend: The Randy Orton Story 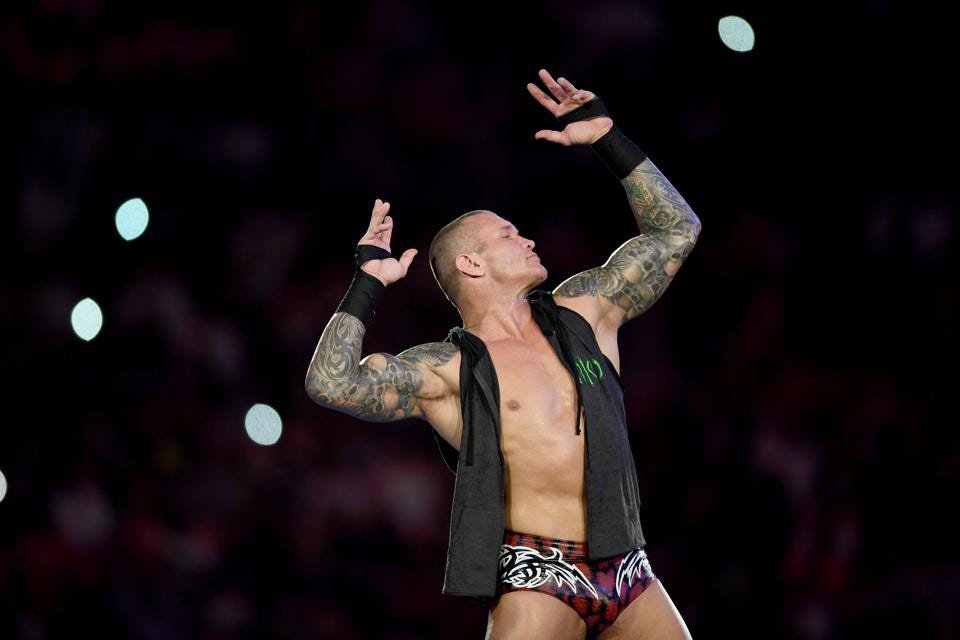 To leave behind a lasting “Legacy,” one must undergo “Evolution.” Randy Orton has done exactly just that. Randy Orton is a third-generation pro wrestler. Son of “Cowboy” Bob Orton Jr, and grandson of Bob Orton. Randy is highly regarded as one of the greatest pro wrestlers in history. Orton is a first ballet future Hall of Famer. His accolades range as deep as the ocean, and they don’t appear to be slowing down on expanding. Randy Orton made his pro wrestling debut in 2000 for a local company in his hometown of St. Louis, Missouri. Orton was trained by personnel of the promotion, as well as by his father, “Cowboy” Bob Orton. In 2001, Randy would secure a deal with WWE, being positioned in its developmental company OVW. It was in OVW that Orton would go on to meet, and square off with The Prototype, who would later go on to become John Cena. Orton would also have the privilege to team with the late-great Bobby Eaton. Randy would finally be called up to WWE’s main product in 2002.

In 2003, Randy Orton would be blessed with an opportunity of a lifetime. He’d join the Evolution stable, alongside another upstart at the time Batista, and veteran legends in Ric Flair and Triple H. The “new face on the block” couldn’t have been in better company, having the Nature Boy Ric Flair, and The Game Triple H to look up to. Orton would spend most of 2003 assisting Triple H in retaining his World Heavyweight Championship. Randy Orton and Evolution reached their peak in December 2003, when all four members won their respective championships, at the Armageddon PPV. From there on, Ric Flair and Batista were tag team champions, Randy Orton was IC champion, and Triple H was World Heavyweight Champion.

Fast forward three years to 2007 and Randy Orton was being positioned for his next run of glory. Orton was the number one contender to John Cena and his WWE Championship at SummerSlam. Cena would defeat Orton at SummerSlam, but the rivalry was far from over. The next night, Orton would assault Cena during a match with Booker T and would proceed to punt Cena’s father, who was at ringside. Orton would now have his rematch scheduled for Unforgiven 2007, against John Cena for the WWE Championship. Once again Orton was unable to secure the title, as the match would be called by way of DQ. On the October 1st episode of Raw, John Cena would suffer a legitimate injury that would require Cena to vacate the championship due to rehab time off. Seven days later, at the No Mercy PPV, Randy Orton would just be awarded the vacant WWE Championship, ushering in his first reign. The reign would last a couple of minutes, as in the first match of the event, Orton would lose the title to an old foe, Triple H. Luckily for Orton, the drought of losing the title in a matter of minutes from being crowned, would come to an end in a few hours. In the main event of No Mercy, Orton and Triple H would go at it once again for the WWE Championship, in a last-man-standing match. Orton would be victorious. No Mercy 2007 would be a rollercoaster night for Randy Orton, getting crowned the WWE Championship, losing it minutes later, and ending the show winning it back. Randy Orton went on to have a lengthy reign, going on to defeat the likes of Shawn Michaels, Chris Jericho, JBL, and Jeff Hardy, in defense of his WWE Championship. John Cena would return from his injury in the Royal Rumble match of 2008 and would be victorious. Instead of waiting for WrestleMania to have his match, as is the usual for Royal Rumble winners, Cena would take his match at No Way Out 2008. He’d fail to bring the championship back home. At WrestleMania, the main event was now John Cena vs Randy Orton vs Triple H, in a triple threat match for the WWE Championship. Despite the odds, despite this being Orton’s toughest task to date, he was still victorious. Orton would lose the title the following month at Backlash, to Triple H, in a fatal four-way against Cena, JBL, and Triple H.

Following an injury shortly after losing the WWE Championship, Randy Orton would return to RAW later on in the year 2008. He’d go on a rant targeting every champion in WWE, including the tag team champion’s Cody Rhodes and Ted DiBiase. Being berated by Randy Orton would inspire them to earn his respect. They would successfully do so when alongside Manu, they’d assault CM Punk so bad he had to vacate the World Heavyweight Championship. On the November 3rd episode of Raw, Randy Orton and CM Punk would finally square off, but the match would conclude in disqualification as Ted DiBiase would interfere. The response from Orton to DiBiase interfering in his match was a punt to the head of DiBiase. With DiBiase now on the shelf, Orton, Rhodes, and Manu formed an alliance called “The Legacy.” In their debut match, Legacy would defeat Triple H and Batista in a three on two handicap match. When DiBiase returned he’d be immediately aligned with Randy Orton and “The Legacy.” They’d help him secure his next WWE Championship at Backlash 2009, in a six-man tag match between Legacy, and Triple H, Batista, and Shane McMahon. For the first time in history, the person that scored the pinfall in a six-man tag would be WWE Champion. The Legacy would allow Orton to pin Triple H to become the new WWE Champion. He’d then defend the title at Judgement Day against Batista, where he would retain, thanks to Rhodes and DiBiase interfering. At Extreme Rules, Orton and Batista would go at it again, this time inside of a steel cage, to try to prevent Legacy from interfering. Orton would lose the title to Batista inside of the steel cage. The next night, Orton and Legacy would assault Batista viciously, forcing him to relinquish the WWE Championship. Orton would win it back after it was vacated, defeating Big Show, Triple H, and John Cena. Randy would now spend the next couple of months in a rivalry reignited, trading the WWE Championship back and forth with John Cena. At Bragging Rights, Orton would lose the title for good, after an hour-long Ironman match against John Cena. From here on things would begin to go south for Legacy. Legacy’s interferences in Orton’s matches began costing him matches, including a very important one. At the Royal Rumble of 2010, Randy Orton had another WWE Championship opportunity against Sheamus, in which he lost due to Legacy interfering. This would result in Orton assaulting Rhodes and DiBiase. Orton was easing in a face turn after so many years, culminating in Orton defeating both Rhodes, and DiBiase at WrestleMania in 2010.

After Legacy broke up, Orton would go on to have one more WWE Championship reign. Once he lost it, he was drafted to Smackdown in 2011. On the May 6th edition of Smackdown, Orton defeated Christian for the second World Heavyweight Championship reign of his career. From that point on, he’d spend the rest of the Summer defeating Christian. After a couple of months of being World Champion, Orton would lose the title to Mark Henry at Night of Champions 2011.

In 2017, Randy Orton would win his 13th WWE World Title at WrestleMania against Bray Wyatt, and wouldn’t touch the championship again for three more years in 2020. It was in 2020 that Randy Orton decided to bring back his famed, beloved, Legend Killer gimmick. It started when Edge returned at the 2020 Royal Rumble. Orton was poised to make the comeback a short one. He wanted to rid of Edge after eleven years away from the ring. The night after the Royal Rumble, Randy Orton would fake an alliance with Edge, only to RKO him, and hit him with a con-chair-to. This was scary since Edge was just returning from a neck injury that forced his retirement for eleven years. The matchup for WrestleMania was now set, Edge vs Randy Orton in a last-man-standing match. Edge would be victorious in this bout, leaving Orton to be out seeking revenge. The second iteration of The Legend Killer would go into full effect following their second match, at Backlash. The match would be promoted as “the greatest match ever,” in which Orton would be victorious with a punt to the head of Edge. It was later learned that not only was Edge on the shelf due to the punt, but he also suffered a torn triceps during “The Greatest Wrestling Match Ever.” Orton was now in pursuit of new things. Specifically his 14th World Championship. Shortly after defeating Edge, Orton would use his Legend Killer gimmick at full force, to become unhinged and chase the WWE Championship. He’d attack legends such as Christian, Shawn Michaels, and Big Show, putting them away with punts. His final stop before setting his sights on Drew McIntyre, and the WWE Championship, was attacking his mentor, Ric Flair. Orton would then go on to fail to capture the championship at SummerSlam, and Clash of Champions. He wouldn’t give up though. He’d get his third match at Hell in a Cell, inside of the structure, against Drew McIntyre for the WWE Championship. Finally, a 14-time champion, as he would defeat Drew McIntyre.

Though the reign was short but sweet, Randy Orton is undoubtedly one of the most accomplished, and greatest pro wrestlers of all time. The record of World Championship reigns currently sits at 16. Orton has 14, and he’s still out here expanding his legacy. John Cena has been heavily suspected to break the Championship record, but it wouldn’t surprise me if Randy Orton was the one to do it. From Legend Killer, to simply legend, Randy Orton has done it all and continues to chase new accolades. He will undoubtedly go down as one of the best once it’s all said and done. Until then, let’s appreciate the Viper, the Legend Killer, Randy Orton.