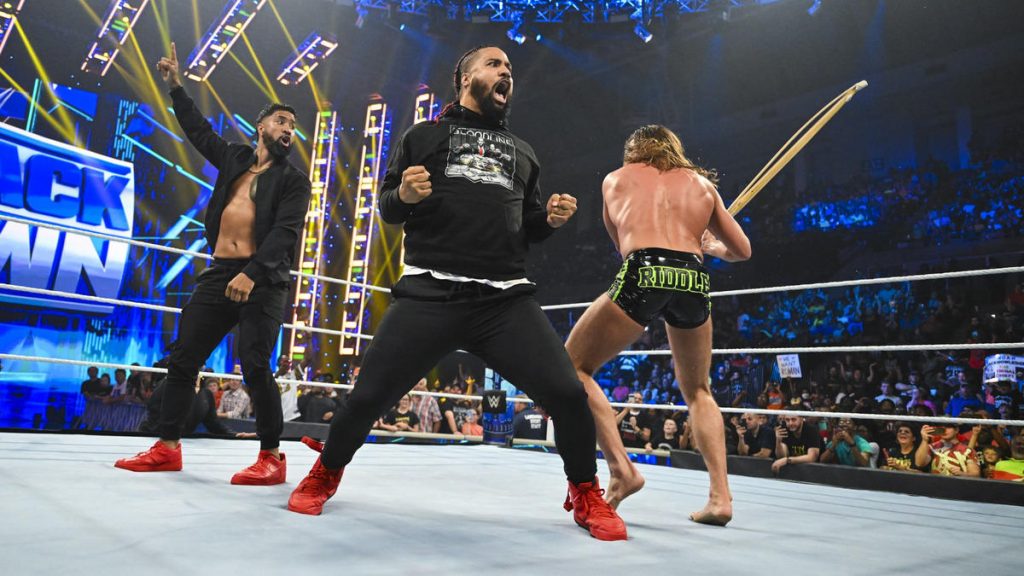 Overall Smackdown had some really good in-ring action, with Sheamus Vs Drew McIntyre having a great hard hitting match that ended in a double count out. Gunther Vs Ricochet was as expected, a great match between the two with Gunther becoming the Intercontinental champion with Ricochet selling like his life depended on it. And The Main Event of Riddle Vs Sami Zayn delivered a great match that resulted in Riddle earning his championship match next week. Ronda Rousey refused to tap or verbally quit from the sharpshooter, and Lacey Evans is still using the women's right. Smackdown was pretty good for the first time in a while but is still going without a sighting from our Tribal Chief Roman Reigns.

Smackdown has a pretty stacked card tonight as we have Drew McIntyre Vs Sheamus wanting to qualify for the Money In The Bank ladder match. Lacey Evans Vs Xia Li is another qualifier for their respective ladder match. We have an Intercontinental Championship match with the champion Ricochet defending against the Ring General Gunther and a main event of Sami Zayn Vs Riddle as Riddle wants revenge from last week. Also what does Ronda think about Natalya getting a shot at her championship.

RATING WORD Drew McIntyre Vs Sheamus with Butch – Money In The Bank Qualifier: Before the entrances McIntyre and Butch have a small altercation. Sheamus and McIntyre start with stiff strikes. They know each other so well, there is no hesitation when laying in fists and boots. Drew has the early advantage hitting a michinoku driver and then delivering tons of chops. Sheamus’ chest is already covered in welts, he tries for 10 beats of the bodhran but McIntyre turns it around and hits them himself. McIntyre is hit with White Noise on the apron as we head to commercial. Out of the break Sheamus scores with an Alabama Slam and then grabs onto McIntyre’s chin. Drew fights out and hits some clotheslines, and then his signature belly to belly and neckbreaker combo. McIntyre kips up and looks for a Future Shock DDT but misses. He does hit a spinebuster though and then a Glasgow Kiss. Now Sheamus hits Drew’s Future Shock DDT. He goes to the top rope but Drew recovers and they fight on the top turnbuckle. Drew hits White Noise off the second rope and that is still not enough. Sheamus hits a running knee and that’s not enough yet either. Drew hits a powerbomb and there’s another near fall. Butch tries to interfere but he catches a Claymore. Sheamus climbs to the top rope and hits a clothesline on Drew outside the ring. Drew lands a belly to belly on the floor and then they fight over by the announce table. They use chairs but hit each other at the same time. The match ends in a double countout and McIntyre and Sheamus just keep fighting outside the ring. Butch finally has recovered and he jumps back in to the mix briefly before Drew and Sheamus fight into the crowd.

Results: NO CONTEST – Double Count Out

Michael Cole announces Cody’s surgery was a success, and will be out of action for up to 9 months.

SQUASH Lacey Evans Vs Xia Li – Money In The Bank Qualifier: Lacey Evans is interviewed by Kayla, asking how proud Lacey would be if she wins the Money In The Bank. Lacey says she wants to Wake Up, Work and Win. Lacey then enters the ring, during Xia’s entrance a pre-recorded promo from Xia is played. Xia says that Lacey is not a winner, she is a whiner and plans to win the Money In The Bank herself. Both women lock up with Lacey throwing Xia off of the headlock and hitting a shoulder block. Xia counters a potential leg sweep and strikes Lacey into the corner, she gets an overhead throw for a nearfall. Lacey fights back and gets a clothesline, Lacey gets a snapmare before hitting a european uppercut into the corner, Lacey gets her Bronco Buster. Xia gets a kick to the midsection but Lacey gets the straight right hand for the quick win. Nothing back but a short qualifier.  (Summary by Coby)

Drew McIntyre demands that Adam Pearce put in the Money In The Bank. After Rousey’s Entrance and a Viking Raiders vignette, Sheamus goes to Pearce and claims Adam and Drew are conspiring against him .

AVERAGE Ronda Rousey Promo: Ronda Rousey will be defending her Smackdown Women’s Championship against Natalya. She is excited to use her armbar on Natalya and she takes a verbal shot at her use of the sharpshooter. Shotzi interrupts and tells Ronda to shut up. Then she calls out Ronda for a fight right now. Rousey gladly accepts and they will wrestle next.

ABOVE AVERAGE Ronda Rousey Vs Shotzi: Ronda hits a Judo throw to start the match and then Shotzi is actually able to get in a little offense. Shotzi kicks Rousey in the back a few times. Ronda recovers and scores on a huge powerslam. Rousey gets an ankle lock with Shotzi slung over the top rope. Shotzi hits a massive tornado ddt on the floor outside the ring and she is fired up. They roll back inside and Shotzi is actually seemingly in control of this match. Ronda is caught in a nasty chickenwing. She fights out, but Shotzi is right back at her. Shotzi slaps Ronda Rousey in the face and it has only incensed Rousey. She hits the Baddest Slam, and then a series of Judo throws. Rousey hits Piper’s Pit and then locks in her signature Armbar to win the match by submission. After the match, Rousey is attacked from behind by Natalya and she is locked in the Sharpshooter.

Riddle backstage interview: He’s asked about the stakes of his match with Sami Zayn tonight. Riddle is here to avenge his friend Randy Orton’s injury at the hands of the Bloodline. Too short to rate.

GREAT Ricochet Vs Gunther with Ludwig Kaiser – Intercontinental Championship: Ludwig introduces the Ring General Gunther from the apron as they seem to have changed Gunther’s theme again. They show a tale of the tape between the men for this match before going to commercial, Ricochet enters right after. Gunther starts off throwing Ricochet from a headlock position as he stays in control of Ricochet. Ricochet tries to use his strikes to his advantage but Gunther corners a headscissors with a chop sending Ricochet head first on the match. Gunther lifts Ricochet onto the turnbuckle and uses his boot to choke him in the tree of woe like position. Back from commercial Gunther gets another big boot to Ricochet, Gunther going for a powerbomb but Ricochet reverses into a sunset flip for a nearfall. Ricochet starts to fight back, kicking down the big man. Ricochet gets a nice headscissors into the corner and hits a shoulder tackle. Gunther catches Ricochet off of the springboard as Ricochet’s arm drags Gunther off of him. Gunther tries for a german but Ricochet flips and lands it. Ricochet gets a jumping knee before Gunther gets a nice clothesline to counter him. Gunther uses the sleeper again before Ricochet uses a corner turnbuckle to break out. Ricochet gets a superkick to Ludwig on the apron as Gunther dodges the springboard but is caught by a springboarding moonsault. Ricochet has Gunther in position for a 450 but Gunther reverses. Ricochet gets a rolling dropkick but kips up right into a shotgun dropkick from Gunther. Gunther gets the powerbomb right after for the victory. Ricochet’s selling made Gunther look so much better in this match.

Results: Gunther by Pinfall via Powerbomb

Madcap Moss Vs Baron Corbin 3 is announced to be next week as a Last Laugh Match.

GREAT Sami Zayn Vs Riddle – If Riddle wins, He gets a Undisputed WWE Universal Championship match against Roman Reigns next week, If Sami wins, Riddle is Barred from Smackdown: Sami meets briefly with Paul Heyman before the match. Heyman says this is the biggest opportunity of Sami’s career, he tells him that if he wins, he might even go to the Tribal Chief and suggest that Sami Zayne be in The Bloodline. A highlight of Riddle’s rivalry with the Bloodline is shown before he makes his entrance. Paul Heyman is joining commentary for this match. Riddle starts quickly with some kicks and then a flying triangle armbar. He follows with kicks to Zayn’s chest and then a gutwrench suplex combination. Riddle is all over Sami Zayn in the beginning of this match. Sami is able to escape the ring to regroup and he goads Riddle into coming after him. Zayn rolls him back in the ring and he has now flipped the momentum in his favor. Only for a short time though as Riddle comes back like a house of fire and lands a running kick to Sami’s chest. Riddle climbs to the top rope where Zayn shoves him to the outside as we head to commercial. After the break Zayn is still in control and he lands a huge brainbuster. Riddle is nearly counted out, but he breaks the count at 9. Sami is now clearly in control, but he tries to climb to the top rope. Riddle springs to his feet and tries for a super RKO but Zayn knocks him off. Sami dives at Riddle and is caught with a knee straight to the head. Somehow Zayn kicks out but Riddle is fired up. On the apron Sami Zayne tries for Randy Orton’s signature draping DDT and he hits it. Zayn coils for an RKO but is hit with a flash knee from Riddle. He follows with kicks to the gut and then his signature running kick on the apron, then it is a floating bro. Riddle turns Zayne over for a powerslam and then he hits the draping DDT. Now Riddle looks for the RKO but he’s caught in a blue thunder bomb. Riddle tries for Bro Derek but misses and Sami Zayn hits the exploder suplex in the corner. Zayn looks for the Helluva Kick but is intercepted by Riddle for an RKO. It will be Riddle vs. Roman Reigns for the Undisputed Championship next week on Smackdown. The Uso’s assault Riddle after the match. They stand tall, but Riddle isn’t done yet, he comes back with a kendo stick to even the odds and he drives both Uso’s out of the ring before standing tall.

Results: Riddle by Pinfall via RKO

Overall Smackdown had some really good in-ring action, with Sheamus Vs Drew McIntyre having a great hard hitting match that ended in a double count out. Gunther Vs Ricochet was as expected, a great match between the two with Gunther becoming the Intercontinental champion with Ricochet selling like his life depended on it. And The Main Event of Riddle Vs Sami Zayn delivered a great match that resulted in Riddle earning his championship match next week. Ronda Rousey refused to tap or verbally quit from the sharpshooter, and Lacey Evans is still using the women’s right. Smackdown was pretty good for the first time in a while but is still going without a sighting from our Tribal Chief Roman Reigns.