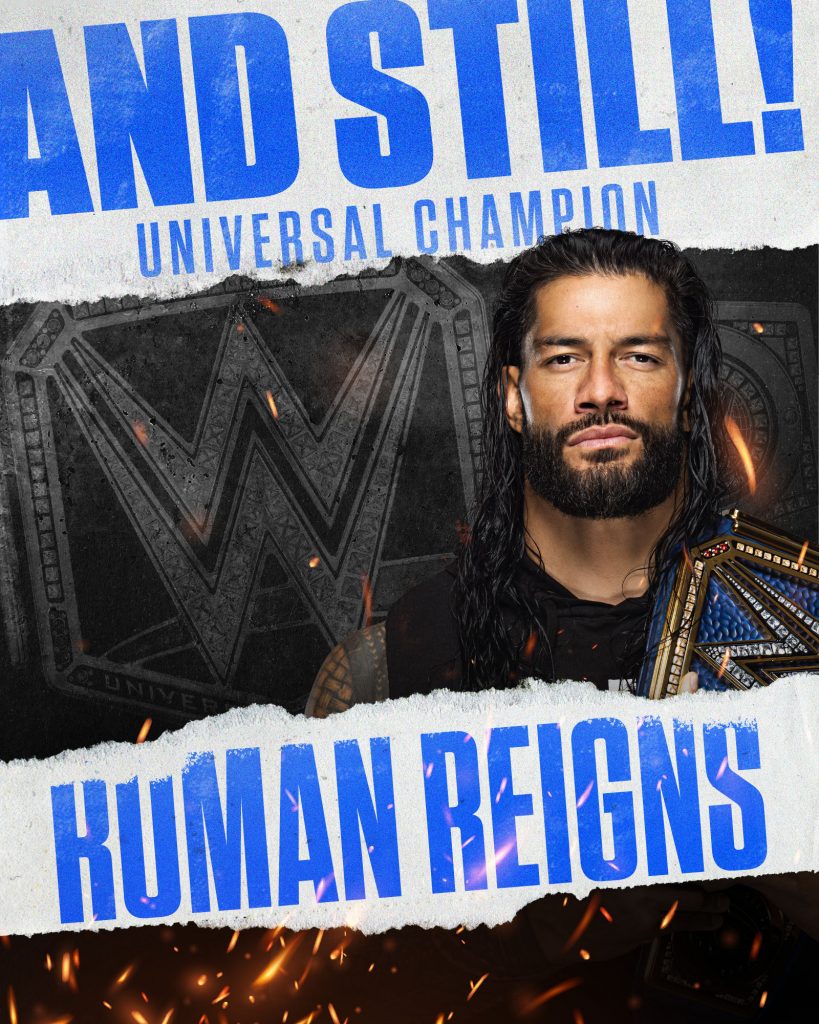 Last week’s episode of Smackdown proved to be one of the more exciting episodes of the year. There was a lot of fun in ring action, the buildup of new faces, and a great storyline involving Roman Reigns and the loyalty of his special counsel, Paul Heyman. With a massive Universal championship match set for tonight between Reigns and Finn Balor, who will emerge victorious? Will the landscape of the blue brand change after tonight? Let’s find out!

GOOD: First up, the Usos come to the ring to cut a promo. They question why the Street Profits chose to stick their nose into the business of the Bloodline. The Usos say that the Profits didn’t make a name for themselves, but rather they irritated the Tribal Chief. The Street Profits come out and mock the Usos saying they embarrassed them last week in front of Roman. Montez says that The Usos do speak facts, but that fact is that they’re going to get their asses kicked tonight. This was a short, good back and forth pre match promo.

AVERAGE: Immediately after is a championship contenders match as the Usos take on the Street Profits. The match was a good enough opener but was hindered by the finish. The finish saw Jimmy come into the ring illegally to cause the DQ. The two teams continue brawling after the match. I wasn’t a fan of the finish but I’m still excited to see where this feud is going.

GREAT: Paul Heyman is outside Roman’s locker room and is talking to someone on the phone. Kayla Braxton approached him for an interview about the events that transpired last week, but was interrupted by an incoming phone call. Heyman’s ringtone is also hilariously Brock Lesnar’s theme song. That’s a nice, clever touch. Heyman talks on the phone about meeting someone in private. Kayla smiles as she concludes her interview. A distraught Heyman chastises a nearby janitor, who randomly happens to be Big E in disguise. He laughs at Paul and taunts him once again with the briefcase. This was a fun segment. I love more of the teases with Paul’s allegiance and Big E is hilarious as always.

MUST WATCH: The Smackdown Women’s champion Becky Lynch has come around to Smackdown. Becky puts over Bianca as a great women’s champion and the only other woman to main event Wrestlemania. She talks about how she was eager to face Bianca, but is shocked that she’s being portrayed as the villain here. Becky says she saved Bianca’s match at Summerslam and that while Bianca may be the EST, it doesn’t make up for Becky’s experience. Bianca Belair comes out and says that the women’s title was a part of her. Bianca admits that she was embarrassed at Summerslam, but won’t bring anyone else down and refuses to make excuses for herself. Bianca talks about what makes her the EST and says that she earned her rematch against Becky, even after she refused to give it. Belair says that Roman is defending his title tonight and challenges Lynch to do the same. However, Becky says no. This was a fantastic back and forth. Both women cut excellent promos here and both women came off as equals. Really good stuff here.

AVERAGE: The Dirty Dawgs are walking backstage when Dolph goes to chat with Toni Storm. Dolph seemingly hits on Toni and tells her to watch his upcoming match. Toni, however, says she’s rooting for Rick Boogs. I really have no idea where this is going but at least Toni is on TV.

AVERAGE: Up next is Dolph Ziggler vs Rick Boogs. This was a decent match and a good showcase for Boogs. Another impressive victory for the man as well, now defeating Ziggler two weeks in a row.

AVERAGE: Becky Lynch is stopped backstage by Adam Pearce and Sonya Deville. Becky makes it clear that she will not be defending the championship tonight against Bianca. Sonya says they understand that, but Becky will be defending the title against Bianca at Extreme Rules. Sonya and Pearce also say that on Smackdown next week will be the official contract signing for that match.

GOOD: Seth Rollins is interviewed backstage before his upcoming match and is asked why he requested a match with Cesaro tonight. He says he requested it because, after watching back his Summerslam match, Edge is an inspiration to him now. He also says that he found information on what led Edge to victory and plans on using that in his match tonight against an old rival. I liked this promo. I really like the progression of delusional Seth and his slow dip further into madness.

GOOD: Up next is Seth Rollins vs Cesaro. Much like their previous encounters together, this was a fun match. Cesaro eventually puts Rollins into the swing, the main crux of their feud in the first place. From this point on, Rollins is set off. Cesaro goes to hit a running uppercut into the barricade, but Rollins clocks Cesaro with a chair to cause the DQ.

GREAT: Post match, Rollins continues to attack Cesaro, using the leg of a chair to put him in the cross face, much like how Edge has done to his opponents in recent months. Rollins hits the curb stomp and goes to conchairto Cesaro, but is stopped by Edge! Edge runs out to the ring with a chair and chases off Rollins to end the segment. Really good stuff here. I like this unhinged Rollins that is violently mirroring Edge.

GOOD: Roman Reigns and The Usos discuss the game plan for tonight, but Heyman comes in with some unfortunate news. He says that Brock Lesnar will be at Smackdown next week. Heyman talks about how Fox is apparently big in Saskatchewan, as that’s where Brock lives. Roman questions how Heyman knows that and further questions if Brock is actually here tonight. This was another fun segment planting the seeds of dissension.

GOOD: Edge is interviewed backstage about what just transpired with Seth Rollins. He talks about how Seth is playing a dangerous game by trying to be him and that he doesn’t want a repeat of what happened to Cesaro tonight. Edge proposes a rematch next week to settle things once and for all. This was a good promo from Edge and I’m looking forward to their match next week.

GOOD: Up next is the KO Show with special guest Happy Corbin. Corbin arrives at the arena beforehand in his new car, being happy as always. Corbin comes out to join the show and once again regales his adventures of rags to riches, but says that he himself has a special guest as well. Corbin introduces his now good friend Logan Paul. Corbin talks about how he and Logan hung out after his brother’s fight against Tyron Woodley. Owens says that that sounds like a terrible experience, but Paul tries bribing Owens with $100. Owens refuses the money, but tells Logan to get out of his ring and get out of WWE. Kevin shoves Logan and the two tease getting physical, but Owens is taken down by Corbin. Corbin chokeslams Owens as he and Logan laugh to end the segment. Overall, this was better than I expected. Making Logan Paul a heel with Happy Corbin was a smart decision. However, the actual content of the segment was honestly nothing that great in comparison to other segments involving Logan recently. However, everyone played their parts here fine and Logan as a heel instead of trying to paint him as a face is a better move.

AVERAGE: Up next is a rematch between Sami Zayn and Dominik Mysterio. This was honestly nothing special. Almost a carbon copy of last week in terms of story but with not nearly as much time to develop a good match. However, this was still decent. The finish sees Rey come out to help his son once again, but Dominik once again falls prey to the Helluva kick.

AVERAGE: Sonya Deville puts over next week’s show during a phone call as Naomi interrupts and asks her when her debut is tonight, as Sonya promised this to her last week. However, Sonya says that she “forgot” and to ask her again next week. A whatever segment but at least Naomi is on TV with some semblance of a storyline.

GOOD: Finn Balor is interviewed backstage before his big title match with Roman and says that people constantly ask him the same question over and over: what would your universal title reign have been had you not gotten hurt? Balor says tonight is going to be the night he finally answers that question. This was short but sweet. I love the story of Finn redeeming himself and getting the title run he’s deserved for years.

MUST WATCH: Finally we have the Universal championship match as Finn Balor takes on Roman Reigns. However, before the match Balor is attacked by the Usos. The Usos attack Finn with the steel steps and continue doing more damage before the Street Profits come out to make the save. Roman Reigns comes out and the match officially begins. From this point on the story is mainly Finn working injured and playing the resilient underdog that refuses to give in. Finn played that role wonderfully. Finn played a great underdog and had an amazing hope spot with the Coupe De Grace. A really close near fall there. However after that, Roman was able to lock in the guillotine and that spelled the beginning of the end for Balor. One other important thing to note, as Roman left the ring, the lights momentarily flickered red and there was a faint heartbeat. Could this be the potential return of the demon? We shall wait and see.

Overall, this was another good episode of Smackdown. While not as strong as recent shows in terms of in-ring action, there were still a lot of great moments and segments. Bianca and Becky had a great promo exchange, Edge had a triumphant return and the main event between Roman and Balor was excellent. However, the rest of the matches, while good, were either too short or plagued by unclean finishes.