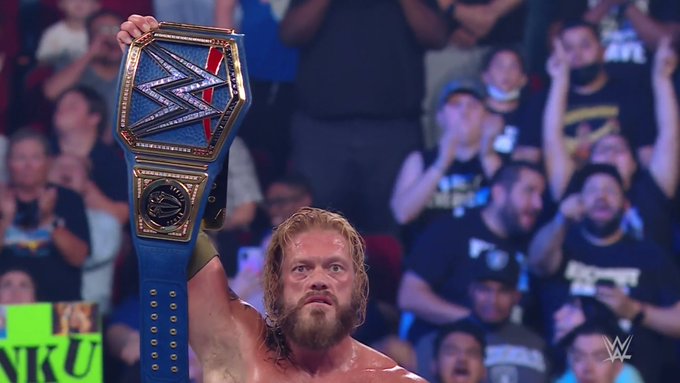 The moment has finally arrived. The Thunderdome is gone, the fans have returned. A new era for WWE begins tonight and I cannot be more excited than I am right now. This is WWE’s chance to start off a new chapter on a massively high note heading into Money In the Bank. Will they live up to the hype? Let’s find out!

GREAT: Vince McMahon comes out first to address the WWE universe. Vince simply says “where the hell have you been!” and leaves. What more could you ask for honestly.

MUST WATCH: First up is the 6-man tag team match as the Universal champion Roman Reigns teams up with the Usos to take on Edge and the Smackdown tag team champions the Mysterios. Roman coming out to fans booing him feels so cursed yet so unbelievably right. What an amazing moment. This match was absolutely electric from start to finish. The crowd was into everything and all six men delivered. The Bloodline win after Jimmy rolls up Rey. Post match the two teams fight until Edge gets taken out by Roman who goes for the chair. Reigns goes for the chair spot Edge has done to the Usos in recent weeks but gets caught with a spear. Roman gets put in the submission by Edge and the crowd erupts when Roman TAPS OUT. Edge picks up the title and drapes it over Roman. Absolutely flawless stuff here. A great final build into the PPV for this match.

Result: Roman and the Usos win after Jimmy pinned Rey

GREAT: Edge and The Mysterios discuss their match until Edge is stopped for an interview. He says that he made Roman tap out like a bitch and says that he’s gonna go to certain places he doesn’t want to go to to beat Roman, but he says that he will do what it takes. Seth Rollins shows up laughing and says that he hopes Edge beats Roman so he can cash in on him. He finishes by saying he’s gonna pull the trigger on what he should have done seven years ago and wishes Edge good luck. This was a great promo from Edge and a great way to set up the eventual match between Seth and Edge.

MUST WATCH: Up next Sami Zayn comes out and says that he is purposely being excluded from the Money In the Bank Ladder match and says that the new glitz and glamour is a distraction to make people not see the conspiracy. Sami says that he’s happy that the fans are in his corner tonight and tries getting a “Justice for Sami” chant going, but to no avail. He calls the Texas crowd “yee-haws” and says that if there was any real justice he’d be handed the briefcase. However he’s interrupted by FINN BALOR!!!!!! Sami tries attacking Finn but gets taken down quickly. Finn hits the Coup De Grace and celebrates. What a moment. So happy to see Finn on Smackdown once again.

AVERAGE: Up next is Shotzi and Nox vs the Women’s tag team champions Natalya and Tamina in a “contenders match.” Kind of weird that they have to have a contenders match even though they beat the champs last week, but I’ll let it slide this once. Liv Morgan and Zelina Vega are also on commentary for this match. Liv and Zelina start fighting on the outside, which distracts Natalya and causes her to get rolled up by Nox. A decent enough match but the commentary from Zelina and Liv got really annoying at times and took me out of the match a bit. Happy Shotzi and Nox won again but let’s not run this back a third time. Post match the four women fight with Liv standing tall in the end.

GREAT: Up next is the Smackdown Women’s championship match as Bianca Belair defends the title against Carmella. Bianca is absolutely over in this match and the first part of this match was a fantastic Bianca showcase. A really good match between these two here. Bianca looked absolutely incredible and her getting cheered in front of fans is amazing. Bianca wins after the hair whip followed by the KOD in a great match.

GOOD: Alpha Academy is backstage and they talk about the five senses. Otis talks about smelling fear in the arena tonight as Cesaro shows up and says that he smells bull, much like Otis’ list of people he said he would run through. Cesaro says that they were smart to leave him off that list, but Gable says that Cesaro wasn’t even on their radar and says that he now has Otis’ attention. Otis finishes the segment by attacking Cesaro setting up their upcoming match tonight. I love Alpha Academy and Cesaro vs Otis should rule.

GOOD: Up next is Otis vs Cesaro. This was honestly way too short to count as an actual match because almost immediately Chad Gable comes in and causes the DQ. However the post match was really good and made up for it. Cesaro gets Gable and swings him around until Otis makes the save and demolishes Cesaro. I’m really hyped for the potential of a proper Cesaro vs Otis feud.

GREAT: Kayla Braxton interviews Paul Heyman about the situation with Edge. Heyman says that Edge “sinned” earlier tonight and that Sunday he will be absolved of his sins. Big E interrupts and says that Edge has a “hold” of Roman and walks off for his upcoming match. A good promo from Heyman and Big E is such a bottle of energy and intensity. This also served as a good potential teaser for Roman and Big E if they ever decide to run with this match finally.

GOOD: Up next, Baron Corbin is out to give a “special request.” Corbin talks about how he’s lost everything. He even goes as far to say his daughter has to eat food out of a can instead of wagyu beef which was funny. Corbin says that he started a Go fund me page that people can send him donations to. Corbin gets on his knees and begs until Kevin Ownes comes out. Baron asks Owens for help because he’s a locker room leader and that he’s just like him. He inadvertently insults Kevin until he gets hit with a stunner. This was a fun little segment leading into the main event.

MUST WATCH: It’s time for the main event as we get the fatal four way between the Smackdown representatives in the money in the bank ladder match. Kevin Owens takes on Big E, King Nakamura and Seth Rollins in what should be a great match. A much shorter match than I feel any of us expected but if anything this made the match more fast paced. This match fired on all cylinders and even had a few crazy ladder spots like Kevin Owens jumping off a ladder and putting Nakamura through the announce table. Rollins wins after curb stomping Big E ONTO a ladder. A really short match but a highly enjoyable one for what it was. Post match, Rollins climbs the ladder and retrieves the briefcase, solidifying that he’s probably not winning come Sunday.

What. A. SHOW. This show is absolutely everything it needed to be. A lot of great in-ring action, great storyline progression and great surprises like the return of Finn Balor. But the most notable part of this show was the crowd. The crowd absolutely made this show and they were absolutely electric and into everything. A great first showing for WWE back in front of fans once again.