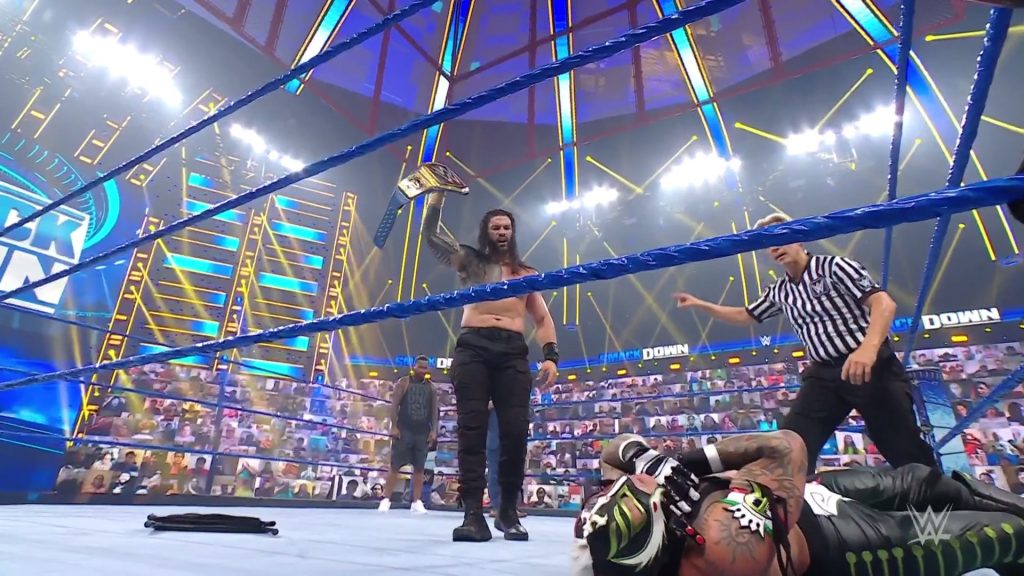 While the midcard and women’s divisions of Smackdown have felt rather lackluster as of late due to repeat matches and below average segments, tonight’s Smackdown certainly has grasped everyone’s attention. With tonight having the first ever Hell in a Cell match in Smackdown history, tonight’s Smackdown is certainly one to watch for that reason alone. With this being the final show before the Hell in a Cell PPV this Sunday, will WWE be able to create some much needed last minute buzz for the show? Let’s find out!

MUST WATCH: First up, Rey Mysterio comes out to cut a promo. Rey says that he feels an immense amount of pain after what happened to Dominik last week. Rey says that Dominik knew the hardships that came with becoming a WWE superstar, but Rey is still furious at Roman’s actions. He continues to say that he wants the hell in a cell match tonight and that while Roman accepted the challenge on twitter, he wants to hear it come out of Roman’s mouth personally. Rey calls out Roman, but instead the cell lowers, trapping him inside. Roman Reigns finally comes out and tries talking Rey out of the match, saying he’s not ready. Reigns has a great line where he says that what he did to Dominik last week is PG compared to what he’s gonna do to Rey tonight. Roman asks Rey one more time if he’s sure he wants this match and that he doesn’t wanna hurt him, but Rey reinforces his stance that he wants this match. Roman turns to Heyman and says that he tried it the diplomatic way, now he’s gonna do it his way. What an opening segment. This segment gave this match a massive big fight feel. Rey’s raw emotion came off as very genuine here and Roman continues to be the most must watch man in WWE. This segment alone has me so hyped for this match tonight.

GOOD: Up next is a tag team match with Big E and Kevin Owens taking on the Intercontinental champion Apollo Crews and Commander Azeez. Apollo and Azeez have a brief backstage promo before the match saying that everything Azeez has done was just the tip of the iceberg and tonight Owens and Big E will get a greater taste of pain. Apollo is so mentally over the top and it’s genuinely really entertaining in my opinion. Big E and Owens are interviewed before the match and are asked why they would want to step in the ring with Azeez. Owens puts over Azeez as a monster but puts over Big E just as hard as the strongest man in the locker room. KO also reinforces the point that Big E is a very accomplished tag wrestler, being tag champ 9 times. However, Big E doesn’t have any real nice words for Owens, adding to the subtle animosity between Owens and Big E. Sami Zayn comes out as well for commentary. Azeez overall was about what I expected in terms of in ring ability. Nothing awful, but very, very basic. Hopefully he gets better the more matches he has. Sami distracts Owens on the outside long enough for Azeez to hit the Nigerian Nail and pick up the victory. Post match, Azeez hits Owens with the nail for the second time. Sami goes backstage and is ecstatic at the sight of Owens in pain, hilariously caressing the screen in glee. Overall, this was pretty good for the most part. Sami Zayn is great as always. The match itself was alright, nothing too special. However, overall the segment as a whole was enjoyable, so this is why I felt it was justified to bump this from just average to good.

AVERAGE: After the commercial break, Owens comes into Perce and Sonya’s office, selling the Nigerian nail and coughing incessantly. He demands a match with Sami and Pearce agrees to give him his match at Hell in a Cell this Sunday. A quick segment that did what it needed to do. Owens once again proves how great he is at selling and Owens vs Zayn is a match I will never complain about.

GOOD: Up next we have the Battle for the Crown as Shinsuke Nakamura takes on King Corbin. The winner of this match will be the official King of the Ring. This was honestly fairly enjoyable simply for the fact that compared to the other matches these two have had in recent weeks, this match actually got time. Nakamura was able to showcase his skills and show why he’s the king of strong style. Nakamura wins with the Kinshasa which was the absolute right move. I was really sick of seeing Corbin as the King of the Ring and Nakamura being the official king should be a breath of fresh air for Smackdown. Post match, Rick Boogs officially crowns Nakamura as the king as Corbin looks on devastated.

GOOD: Up next, Bianca Belair and Bayley have a face to face. Bianca says that she was happy she could turn Ding Dong Hello! into ding dong goodbye. Bianca says that she won’t let Bayley define her much like how she refused to let her childhood bullies define her. Belair officially challenges Bayley to a hell in a cell match. Bianca says that Bayley won’t be laughing after she destroys her inside the cell. Bayley comes out and the two immediately start brawling. Bayley stepping on Bianca’s braid and posing with the championship is a cool visual and is accompanied by the thunderdome lighting up with the same pose. I really wish the whole feud was on par with this. This was a really good segment that had me interested in this match. While I don’t feel the inclusion of the cell is necessary for this match, this segment did a good enough job making me feel interested to see them in the cell. Bayley had a mean streak to her in this segment that felt deserved after last week. No more constant laughing, no more joking around. Just two women that don’t like each other beating each other up. Really good stuff compared to the last couple weeks.

GREAT: Roman Reigns is backstage when he is confronted by Jimmy Uso. Jimmy says that while he doesn’t agree with most of Roman’s philosophy, he does agree that they’re family. Jimmy says that he hasn’t heard from Jey at all over the past week and offers Roman help tonight in his match. Roman says no and says that he needs Jey. The family isn’t complete without Jey by their side, so Roman tells Jimmy to go find him. The character development for Jimmy is finally in motion. Jimmy is seemingly becoming more and more compliant with Roman and is starting to see his point of view. I can’t wait to see when Jimmy eventually joins Roman and the bloodline is complete.

GOOD: Up next is Otis taking on Angelo Dawkins. Chad Gable slaps Angelo before the match, luring Dawkins into a trap where Otis beats him down. The match never officially gets under way, however, as Gable and Otis continue to beat down Dawkins, targeting his injured shoulder. Otis and Gable hit a SICK looking discus lariat, German suplex combo that looked absolutely devastating. The development for Otis has been absolutely fantastic as of late, making him come off as this unhinged monster. I’m really liking this Street Profits Alpha Academy feud so far and I’m really interested to see where this goes.

GREAT: Cesaro sits down with Kayla Braxton. Kayla asks him if Seth Rollins went too far with his attack on him but Cesaro says that Seth didn’t go far enough. Cesaro says that Seth tried to take away the only thing he loves and that’s pro wrestling. Seth shows up and requests to have a “civilized” sit down with Cesaro. Seth says that Cesaro disgusts him and that he sees everything that Cesaro stands for as disgraceful. Rollins confirms that he will face Cesaro Sunday at Hell in a Cell and says that he will put Cesaro in his place. Cesaro says that he respects Rollins as a competitor and that he’ll see him on Sunday. Cesaro pushes Rollins out of his chair and leaves. The segment ends with Seth looking irate. This was another great example of simple but effective. There’s this great contrast of styles between Seth’s condescending attitude and Cesaro’s suave demeanor that works very well for these two guys. I also really enjoyed the go home segment being this disingenuous sit down segment as opposed to a full out brawl like most of the feud has been. It creates another great contrast for the feud. Seth chooses to end the build by mentally attacking Cesaro as opposed to physically attacking him, which I really like. It shows Seth seemingly coming to Cesaro’s level after Cesaro came to Seth’s last week. Good stuff from these two and definitely one of the better segments of the feud. Really looking forward to the match Sunday.

MUST WATCH: Finally, it’s the match we’ve all been waiting for. Roman Reigns defending the Universal championship against Rey Mysterio inside hell in a cell. Commentary does a great job reinforcing the point that Roman has never lost inside a hell in a cell match. Rey immediately sets a fast pace going for weapons like a chair and a fire extinguisher, showing his desperation to batter Roman and make him pay. Roman eventually gets the upper hand on Rey, giving him a nasty powerbomb into the cell. Reigns  eventually wins with a new submission of sorts that commentary calls a modified guillotine. What a match. My only complaint with this match was the commercial breaks. It took away from the match a little bit but not nearly enough to hinder my overall enjoyment of the match. Post match, Jimmy shows up and raises Roman’s hand seemingly acknowledging him as his tribal chief finally. Roman adds insult to injury by locking in the choke on Rey one more time and makes him tap out once again to end the show.

This was a really damn good show. Easily the best episode of Smackdown in several weeks. While the midcard still needs some work in some areas, there was enough development this week to make me interested to see what comes next. Shinsuke being the new king is great, Otis continues to look like a beast and the feud between Cesaro and Rollins continues to heat up. A really solid go home show for Hell in a Cell.