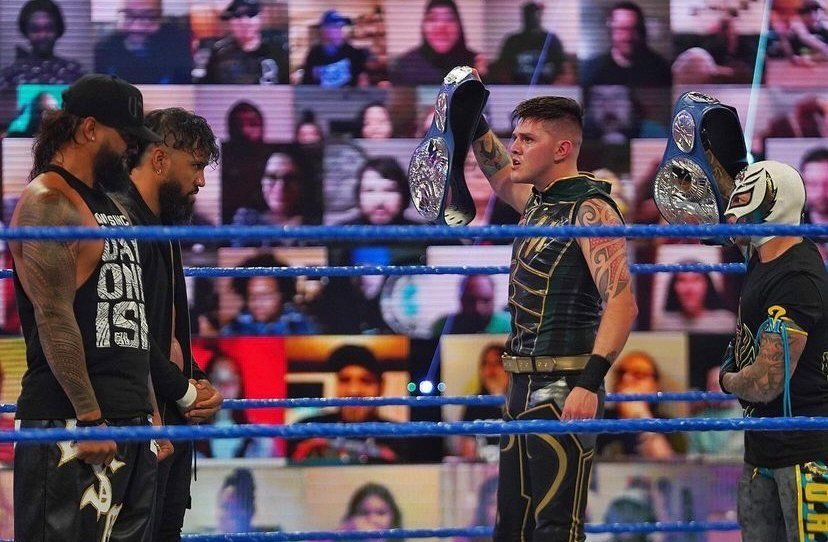 Having a dream tag team match on the card Smackdown are looking for another good episode. After last week can they keep the heat up going into Hell in a Cell in a couple weeks we will see on this episode on Smackdown.

GREAT: Smackdown started off with The Street Profits and they were talking about there match with The Usos. They talk about the old usos with the paint and how the dance they do is still great. He then said Roman lives free inside the head of Jey and He’s started to lay seeds into Jey’s head. This is when The Usos came out. Jimmy said no matter how long he’s out once The Usos will be the best tag team in the business. Jey said that they shouldn’t have ever said anything about Roman and he welcomed them to the nightmare. Then both of the usos said “Welcome to the uso penitentiary”

AVERAGE SQUASH: Tamina and Natalya defeats The Riott Squad in an mostly one sided match

GOOD: Bianca Belair defeats Carmella in a really enjoyable match with Bayley being great on commentary.

GOOD: Seth Rollins was in the middle of the ring and he called out Cesaro but he didn’t come out. Seth then started laughing and said that he’s not here tonight and then he said he’s gonna remind everyone why he’s not here. A promo package starts playing of what happened last week. He said that he’s got an exclusive for them and then it was a sound of someone throwing up. He started laughing then he explains that he blacked out and when he woke up he’s hovering over him. He said that not only is it Cesaro’s fault but it’s also our fault. Rollins then said that we brainwashed him into thinking he deserved a spot in the main event. To end the segment he started singing the birthday song to himself.

BAD: Kevin Owens defeats Apollo Crews by DQ because of Commander Azeez and the nigerian nail. It ended after only 2-3 minutes.

AVERAGE: The Mysterios defeat The Dirty Dawgs in an average match not bad but not as good as the match at Wrestlemania Backlash.

RESULTS: The Mysterios win via pinfall

Besides the first match this episode was quite skippable. It was good show but nothing was too special on the card. There was only one bad thing on the whole show but everything else was good, nothing too amazing. The first match was definitely worth the watch though . The MVPs of the show were The Usos.