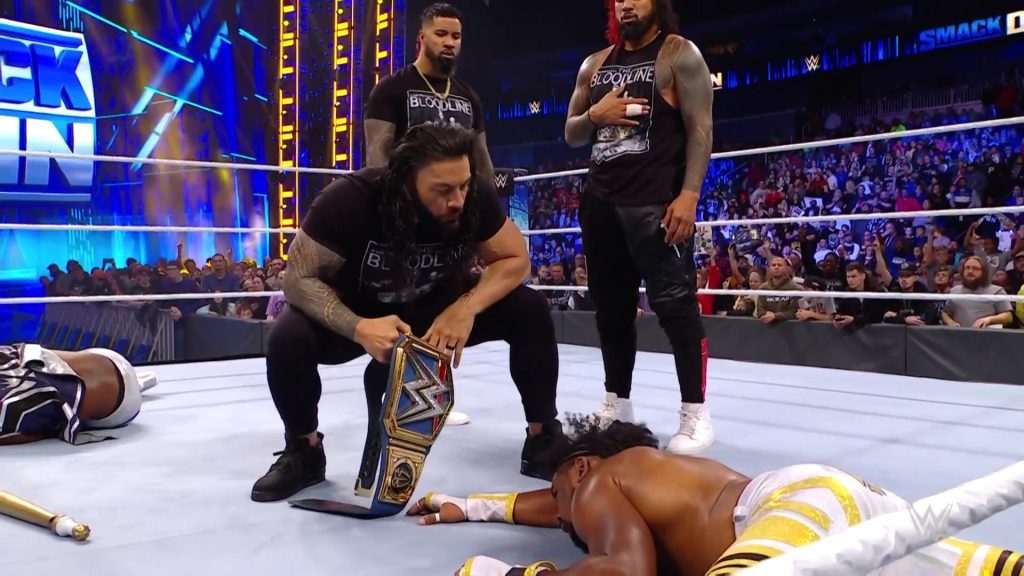 Last week’s episode of Friday night SmackDown proved to be another entertaining two hours of television for the blue brand. The iconic feud between The Usos and the New Day has been renewed, Shotzi Blackheart is coming into her own and so much more. Interestingly, all of that was WITHOUT the presence of the Universal champion, Roman Reigns. With Roman returning to his show tonight, how will he shake up the show? Let’s find out!

GREAT: The show kicks off with the Universal champion Roman Reigns. Roman talks about how Brock was suspended last week and asks Paul Heyman about The Usos’ loss to the New Day last week. Roman can’t fathom the idea of the Usos losing to the New Day and Jimmy Uso says that tonight he’s going to get revenge on Xavier Woods. The New Day interrupt and Xavier pokes fun at the idea that if you’re the king, you sit at the head of the table. Xavier accepts Jimmy’s challenge for a match tonight, on the condition that if Woods wins, Jimmy must bend a knee to the king. The Usos, however, decline the offer until Roman accepts anyways. He accepts on the condition that if Jimmy wins, Woods must acknowledge Roman.

AVERAGE: Up next we have our first match as Naomi takes on Shayna Baszler. Before the match Sonya Deville is interviewed about her vendetta against Naomi, and justifies her actions by saying that those actions have lit a fire under Naomi. This was an alright match. Naomi wins originally, but Sonya restarts the match and Shayna wins after locking in the Kirafuda clutch.

AVERAGE: Sonya Deville interrupts and says that Naomi broke a rule of some sort that resulted in Sonya reversing the decision.

GOOD: Roman Reigns is backstage with the Usos. He talks about how he was gone for one week and the Usos had to go and lose a match. Jimmy starts snickering until Roman puts him in his place. Good stuff here.

GOOD: Kayla Braxton is backstage with Ridge Holland. Ridge talks about how he’s excited to meet his hero, Sheamus and regales in tales of him watching Sheamus’ best moments.

GOOD: Up next is the team of Los Lotharios ( Angel Garza and Humberto Carrillo) vs Cesaro and Mansoor. This was a fun little match. Garza and Carrillo win after hitting their chancery, drop kick combo.

AVERAGE: Jeff Hardy is backstage talking with Aliyah when they’re interrupted by Sami Zayn. Sami gives Aliyah advice about how she can survive on Smackdown.

GOOD: Up next is another Drew McIntyre open challenge. The challenge is answered by Ricochet, who cuts a brief promo saying that Drew needs to be careful about doing open challenges because someone will come along and beat him. During the match, Mustafa Ali has a brief interview saying that him and Drew have a lot in common. This was a very fun short match. A good showcase here for Ricochet. Drew wins after hitting Ricochet with a mid air claymore.

GOOD: The New Day is backstage when they’re interrupted by Kayla Braxton who asks them about Woods’ match later tonight. Woods says that he’s unafraid.

AVERAGE: Ali goes to see Ricochet in the locker room and proposes a partnership. Ricochet declines on the grounds that Ali never accepts defeat and correctly brings up how he treated Mansoor.

AVERAGE: Up next is Happy Talk with Corbin and Madcap Moss with their guests the Viking Raiders. The Raiders come out and say that they’re here to raid Happy Talk because it sucks. Moss insults them and the Raiders trash the set, which leads to our next match.

AVERAGE: Immediately after we have the Viking Raiders vs Happy Corbin and Madcap Moss. This was honestly a better match than I expected. This was a decently fun back and forth match. The Raiders looked very good in this match until the finish. The finish sees Corbin and Moss intentionally getting themselves counted out. This was a good match, but it’s gonna be docked a bit for the finish.

AVERAGE: Sami Zayn is backstage with Hit Row and talks to them about the importance of making an entrance. Top Dolla asks Sami if he can show them how to make a proper entrance, to which Sami agrees. This should be interesting.

AVERAGE: Sami Zayn makes his entrance and flails around like an idiot, saying that a good superstar needs presence. He talks about being the locker room leader until Hit Row comes out. They say they don’t need Zayn’s guidance and say that he sucks.

AVERAGE: There’s a brief backstage segment with Roman and Jimmy Uso where Roman tells Jimmy to get the job done.

GREAT: Finally we have the main event as King Woods takes on Jimmy Uso where the loser must bend the knee to the winner. This was a fantastic main event. Jimmy almost beats Woods with help from Jey, but Jey gets caught by the ref. Woods proceeds to roll him up and win.

MUST WATCH: Post match, Jimmy goes to bend the knee to Woods, but Roman comes in to stop it. The Bloodline beat down New Day until Woods fights back. Woods is taken down by Roman as The Usos destroy Kofi’s leg with a Tequila Sunrise, frog splash combo to end the show. A fantastic way to end the show.

Overall, tonight’s episode of Smackdown was hit or miss. Everything with Roman, the Usos and the New Day was great.  Drew McIntyre vs Ricochet was a lot of fun. Everything else was fairly standard. The in ring was good for the most part but a lot of the backstage segments were just kinda average. A good show, but Smackdown has had better ones.