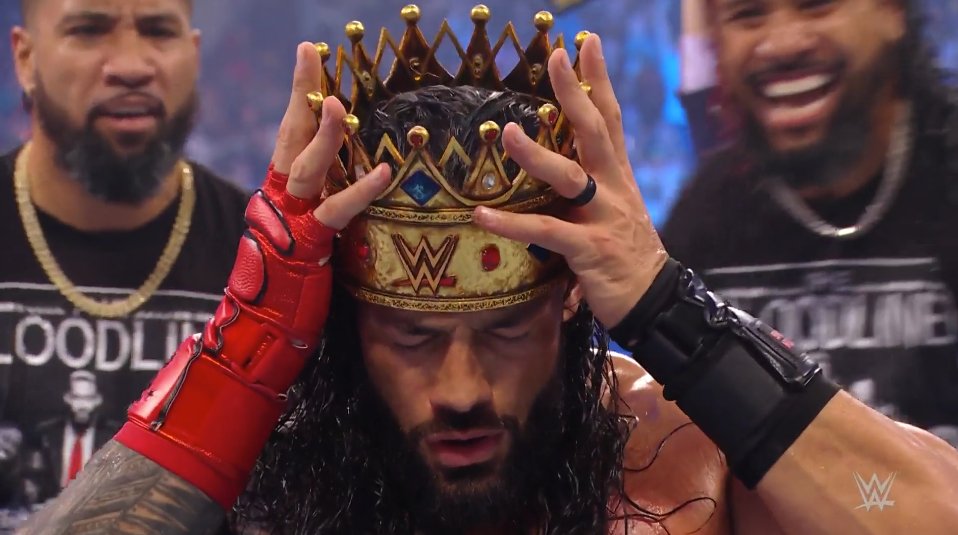 Last week’s episode of SmackDown, while good, was certainly one of the weaker installments in recent weeks. The storyline with the New Day and the Bloodline is proving to be interesting and it’s nice to see new faces like Shotzi and Ridge Holland get some spotlight. With the Tribal Chief Roman Reigns taking on King Woods tonight, can Woods find a way to conquer the Universal champion? Let’s find out!

GOOD: The show kicks off with Sonya Deville presenting the Smackdown Women’s team at Survivor Series. Sasha Banks comes down separately and immediately makes a beeline for Shotzi, but is stopped by Sonya and company. Naomi then comes out and immediately starts beating down Shayna Baszler. Everyone on the team begins fighting each other as Sonya tries to restore order. This was a good start to the show and leads into our next match.

GOOD: Sonya Deville, during the commercial break, creates a six woman tag team match as Sasha Banks, Aliyah and Naomi take on Natalya, Shayna Baszler and Shotzi. Natalya hits a really nice suplex to Naomi off the apron that was actually very unique. The finish sees Natalya lock in the sharpshooter on Aliyah near the ropes. Naomi clocks Natalya, which allows Aliyah to roll her up for the win. This was a good enough match to start the show.

AVERAGE: Sami Zayn is backstage talking to himself in a mirror. He says that he’s the leader of Team Smackdown and that he’ll lead the team to victory at Survivor Series. The camera pans out to reveal Jeff Hardy standing there, listening to the whole thing. Zayn is embarrassed that Jeff heard his monologue, but asks him what he thought. Jeff says that it sucked.

GOOD: Aliyah is backstage and is interviewed about her first win. She’s ecstatic about her win, but is interrupted by Sonya Deville. Sonya gives her congratulations on her win, but informs Aliyah that she is no longer on the Women’s Survivor Series team. Why? I don’t know. However, I’m not opposed to this in the slightest.

GREAT: Roman Reigns and Paul Heyman are interviewed by Kayla Braxton. Roman blows her off and leaves Heyman to answer her questions. He talks about Reigns’ match with King Woods tonight and says that if he can’t make Xavier acknowledge him tonight, he will acknowledge Woods or be stripped of the Universal title and be BANNED from Smackdown. Things just got interesting.

AVERAGE: Happy Corbin and Madcap Moss are backstage laughing about The Viking Raiders. Madcap tells a bad joke. Nothing new from these two.

AVERAGE Up next is a tag team match as Los Lotharios take on Shinsuke Nakamura and Rick Boogs. This was a good enough match. The finish sees Garza grab Shinsuke’s leg, which allowed him and Humberto to hit a nice springboard total elimination for the win.

AVERAGE: Adam Pearce is with VON WAGNER when he’s interrupted by Sami Zayn. Sami sits his grievances about Jeff Hardy being on Team Smackdown and asks Pearce to do something about that. He creates a match tonight between Jeff and Sami where the loser gets taken off of team Smackdown. I’m very confused as to why Von Wagner wasn’t acknowledged in this segment at all but otherwise it was decent.

AVERAGE: Charlotte Flair comes out and addresses Becky Lynch. She has this awful catchphrase she tried getting over “Becky uh oh.” This segment was honestly really bad until she’s interrupted by Toni Storm. She comes out and asks Charlotte why she hasn’t defended the Smackdown Women’s championship since she won it and challenges her to a title match tonight. Charlotte, however, declines. Toni Storm single handedly saved this segment from being bad.

GOOD: King Woods is backstage with Kayla and talks about his match with Roman. He talks about storming the Island of Relevancy to plant his flag and will make Roman bend a knee to him tonight.

AVERAGE: Aliyah is backstage sulking about being kicked off the team when Mustafa Ali shows up. He tries consoling her until Ricochet shows up and tells her that Ali is not to be trusted. He tells her that she did great out there and she has nothing to be ashamed of.

GOOD: Up next is Jeff Hardy vs Sami Zayn where the loser will be kicked off the Survivor Series team. Jeff hits a nice Whisper in the wind for a two count. Sami rolls up Jeff and puts his feet on the ropes, but is caught by the referee. Zayn argues with the ref until Jeff takes him down and hits the Swanton for the win.

SATISFACTORY: Hit Row are backstage and they cut a promo about their future on Smackdown. Jinder Mahal and Shanky have a segment immediately after where Shanky starts rapping about Hit Row. It seems we’re getting a Hit Row vs Jinder and Shanky feud. This was… something.

GOOD: Ridge Holland is backstage being interviewed about Sheamus. He reinforces the point that Sheamus is his idol and that Sheamus helped Ridge take his love of violence and channel it into wrestling. To thank him, he wants to form a tag team with Sheamus. Cesaro shows up and references the Bar and tells Holland to be careful what he wishes for teaming with Sheamus. Holland doesn’t care and says that they’ll be a better tag team than the Bar ever were.

GREAT: Finally we have the main event as Roman Reigns takes on King Woods. Roman has a great spot where he hits Woods with a uranage onto the announce table. Woods takes control and eventually hits his tightrope coast to coast elbow drop. However, the Usos jump the ring and attack Woods to cause the DQ. Post match they beat down Woods and the Usos huge Reigns the crown. A good ending to the show.

Tonight’s episode of Smackdown was an… experience to say the very least. A lot of interesting changes like Aliyah and Sami being taken off their respective teams, Toni Storm challenging Charlotte, the apparent main roster call up of Von Wagner and so much more insanity made for a very chaotic, but decent, show. The main event with Woods and Reigns was unironically a great match and the best part of the show. What a weird show overall, though.