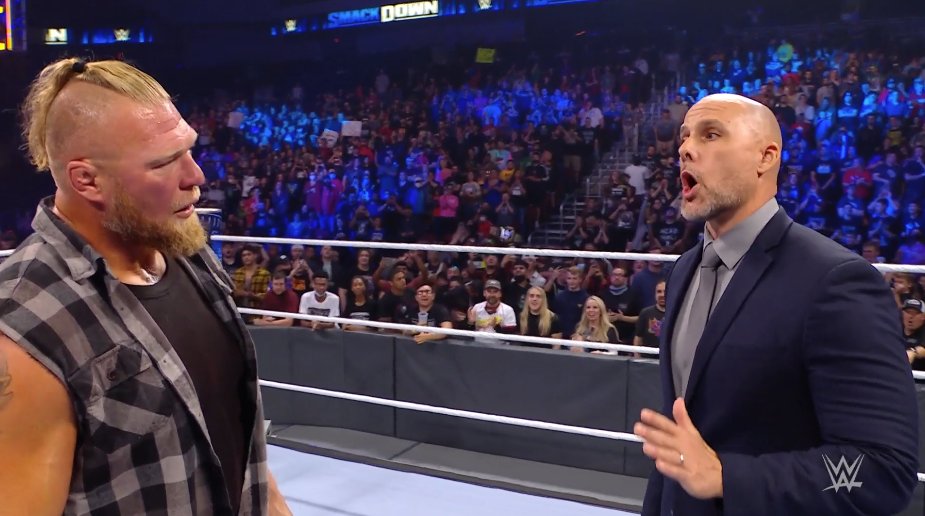 Tonight begins a new era for the WWE. On the heels of an excellent Crown Jewel PPV, the new rosters that were decided weeks ago come into full effect tonight. How will the new additions to the blue brand shake up Friday nights? Let’s find out!

MUST WATCH: The show kicks off with the Universal champion Roman Reigns. Roman addresses Heyman throwing the championship title into the ring last night, as opposed to just giving it to Roman. He puts himself over as the man that carried WWE for the past year and lists off everyone he’s beaten, Brock included. He acknowledges Brock saying that he’s going to beat Roman senseless tonight and challenges Lesnar to come to the ring right now. However, there’s no Brock. Roman talks until Brock FINALLY comes out. Brock starts beating up Roman until he sets his eyes on Paul Heyman. Brock hits Reigns with the steel steps and goes to F5 him through the announce table. However the Usos make the save and take a beating as well. Brock smashes a camera and starts beating up referees and WWE officials. The Smackdown roster comes out as well to try and restrain Brock, but again to no avail. Cesaro eventually stops Brock and in the commotion, the Bloodline escapes to end the segment. This was a really fun segment but this went on for WAY too long in my opinion. The whole Roman waiting for Brock was unneeded, especially if Brock was in the arena the whole time. Regardless of that, however, this was still a solid segment.

GREAT: Adam Pearce cuts a promo after the carnage that Brock Lesnar just created. Pearce says that due to his actions, Brock Lesnar will be hereby suspended. Brock Lesnar comes back out and does not seem too happy about this decision. Brock grabs Pearce by the neck. However, Pearce stands his ground and the suspension stands. Lesnar gives Pearce two F5’s for his troubles.

GOOD: Sonya Deville is backstage and Naomi interrupts her. She demands a fair match with Sonya tonight, but Sonya declines. Drew McIntyre interrupts Sonya and says that he wants to make a name for himself. He plans on doing so by issuing an open challenge.

AVERAGE: Drew comes out and issues his open challenge, which is answered by Sami Zayn. Zayn has a new theme which sucks and talks about being the gatekeeper of Smackdown. If Drew wants to make a name for himself, he has to go through him. This sets up our next match.

AVERAGE: up Next is Drew McIntyre vs. Sami Zayn. This was a fun little opening match. A shame, though, that the first match comes over half an hour in. Drew wins after countering Sami’s Helluva kick into the Claymore for the easy win.

GREAT: Up next is the coronation of King Xavier Woods. Kofi introduces Woods to the ring and officially proclaims Woods as the new king. He hands Xavier the “cloak of protection” as well as his scepter. He finishes by giving Woods his crown. This was a fun, heartfelt segment for Woods.

GOOD: Becky Lynch is backstage and talks about the women’s title exchange. Instead of wanting to exchange the titles, however, she talks about how she never officially lost the raw women’s title and ponders the idea of becoming Becky2belts once again. An interesting angle heading into the main segment of the show. Very intrigued to see where it goes.

AVERAGE: Up next is Mansoor vs Mustafa Ali once again. This was a short, but fun match. Mansoor wins after rolling up Ali for the win.

AVERAGE: we have a quick barrage of promos from the new Smackdown talent such as Ridge Holland, Aliyah and Sheamus. A decent backstage segment.

GREAT: up next is the debut of Hit Row. They all cut a really solid promo introducing themselves to the main roster audience. This felt no different than something they’d do in NXT. Great stuff here.

GOOD SQUASH: Isiah “Swerve” Scott and Top Dolla face two local enhancement talents. This was a great showcase for Top Dolla, putting him over as the heavy of the group. A solid debut for Hit Row.

AVERAGE: Kayla Braxton is backstage and interviews Sonya Deville about what transpired earlier tonight with Adam Pearce and Brock Lesnar. Sonya says that she offered to deliver the suspension instead of Pearce, but Pearce wanted to do things his way. Deville puts over the women’s title exchange to end the segment.

GOOD: Up next we have Shinsuke Nakamura vs Happy Corbin. Before the match Corbin and Madcap Moss have a stupid segment where Moss continues to make bad jokes. Overall, though, this was actually a relatively fun match for the most part. The finish sees Rick Boogs play his guitar to will Shinsuke back into the match, but Moss comes out to stop him. Shinsuke attacks Moss, which allows Corbin to capitalize. He hits End of Days on Nakamura to pick up the win.

AVERAGE: Charlotte has a quick backstage promo in response to what Becky said earlier tonight. She says that Becky should go back to carrying Charlotte’s bags like she did throughout most of her career and give up the title.

AVERAGE: Finally we have the women’s title exchange. Charlotte goes to give Sonya the Raw title, but Becky goes to grab it herself. They switch the titles, but Charlotte challenges Becky to a winner takes all match tonight. Considering there’s only five minutes left in the shell, that seems highly unlikely. Sasha Banks interestingly comes out and says that she runs the blue brand and runs down Charlotte. Becky leaves the ring and says she’ll face one of them at Survivor Series. Charlotte and Sasha go back and forth until the two begin to brawl. This was a good enough segment, but I feel it didn’t really accomplish much of anything. It sets up Charlotte vs Sasha which is good. On the other hand, though, why tease the possibility of Becky2belts and not deliver on it? That seems very counterproductive.

Overall, this was a good enough episode of SmackDown. The stuff with Brock and Roman was fantastic and the debut of Hit Row was great. Everything else, though, was very forgettable. The in-ring action was considerably weak as opposed to recent weeks and, for what’s supposed to be a new roster, why are we still getting matches like Corbin vs Nakamura? The main event segment wasn’t bad per se, but ultimately accomplished nothing. Very disappointing considering they teased an interesting winner takes all angle that’s seemingly not gonna happen now. A good enough show, but nothing highly memorable outside of the first half hour.