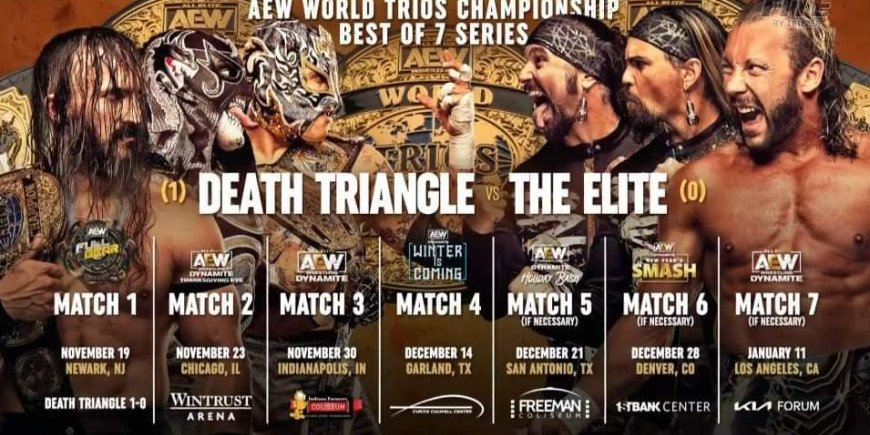 The three title matches and the eliminator finals for this Wednesday’s episode of AEW Dynamite have been revealed.

Orange Cassidy interrupted Chris Jericho’s backstage promo on Saturday night’s AEW Full Gear 2022 pay-per-view while he was congratulating himself on his win. Tomohiro Ishii requested an ROH World championship match, which will occur this Wednesday night, and Cassidy informed Jericho of this. Tomohiro Ishii, a former ROH TV Champion, is one of the former ROH Champions that Jericho has faced up against. Cassidy instructed Jake Hager to come to Dynamite, and he would battle him for the AEW All-Atlantic title after Jericho accepted the challenge and left.

The Elite (Kenny Omega & The Young Bucks) and the AEW Trios Champions Death Triangle (PAC, Rey Fenix, & Penta El Zero Miedo) would face off in a best-of-seven series. By winning at AEW Full Gear, Death Triangle has a 1-0 lead. In the firm’s history, this will be the first time AEW has done a best-of-seven series.
Match two will take place on the November 23 episode of AEW Dynamite.

The full schedule can be seen below:

The second match will be on the AEW Dynamite show airing on November 23.
The Elite defeated Dark Order in the tournament final at AEW All Out to become the first-ever AEW Trios Champions (Hangman Page, John Silver, & Alex Reynolds). However, due to their involvement in a fight with CM Punk and Ace Steel, they were later stripped of their belts and suspended.

You can check out the updated lineup for Wednesday night’s episode of AEW Dynamite below:

Best Of Seven Series:
Death Triangle vs. The Elite