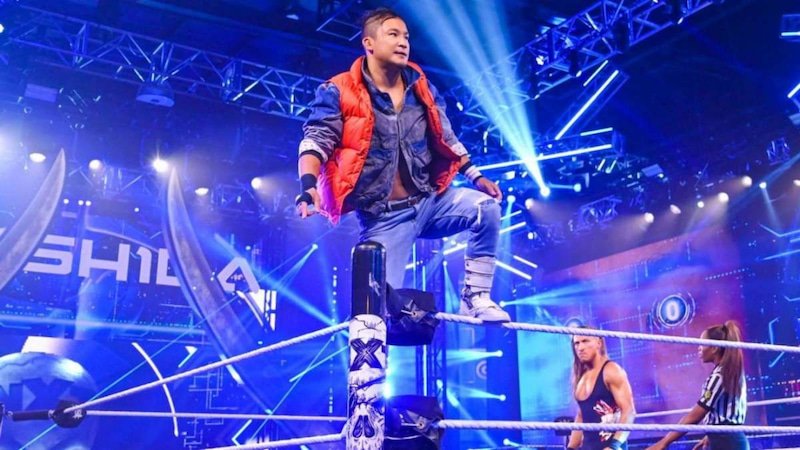 Image Credit: WWE
After a war between current IWGP Jr Heavyweight Champion Taiji Ishimori defending his gold against Best of the Super Jr 29 winner Hiromu Takahashi at a packed Kourakuen Hall, Ishimori was left with no challenger worthy of an IWGP Jr championship opportunity. Ishimori proposed a rematch against El Desperado, the person whom he won the title from and was on commentary. As soon as Desperado stood up, the crowd suddenly went wild. The screen in Kourakuen showed a video package of none other than Kushida’s entrance package. With his music and entrance video playing through the holy palace of Japanese pro wrestling, KUSHIDA finally came back to NJPW after almost 3 long years.

As you readers may know, KUSHIDA has been with WWE wrestling in NXT until a few months ago when he decided to not renew his WWE contract with fans speculating he will come back to Japan. KUSHIDA made his WWE in-ring debut against Kassuis Ohno on an episode of NXT on May 1 of 2019. KUSHIDA would go on to compete in the Dusty Rhoades Tag Team Classic with his NJPW “Time Splitters” tag partner, Alex Shelly, reviving their tag team. They would sadly be knocked out of the tournament in their first-round match against Grizzled Young Veterans with the reunion being only that one match. KUSHIDA was also a 1-time NXT Cruiserweight Champion during his run in WWE defeating Santos Escobar. He would lose the title to Roderick Strong on NXT 2.0. Before letting his contract expire, KUSHIDA formed a tag team named Jacket Time with another Japanese wrestler, Ikemen Jiro who also started his career in Japan but in Wrestler-1, unlike KUSHIDA.

KUSHIDA was one of the top stars of the Jr division in NJPW as he was a 6-time IWGP Jr Heavyweight Champion, 2 time IWGP Jr Tag Champion with his Time Splitters tag partner Alex Shelly, 2 time Best of the Super Jr’s winner, and 1 time Super J Cup winner. Kushida was what I call “The Tanahashi of the Jrs” in his run in NJPW. KUSHIDA made his NJPW debut in 2010’s Best of the Super Jr’s tournament where he would end up with 8 points. Kushida was (as I mentioned) a 2 time Jr Tag Champion with Alex Shelly where the pair also won the Super Jr Tag Tournament of 2012. KUSHIDA left NJPW in early 2019.

KUSHIDA returned to NJPW today after the main event of Ishimori VS Hiromu. As KUSHIDA walked out of the curtain a massive pop came from the crowd as they couldn’t hold their silence. KUSHIDA then challenged for Ishimori’s IWGP Jr Heavyweight Championship where Ishimori responded with anger that KUSHIDA just walked in after 3 years and just challenged him with no right.

KUSHIDA: “New Japan Pro Wrestling fans, long time no see, my name is KUSHIDA. I just signed my contract at the NJPW headquarters, I will be returning to NJPW! As I moved from Orlando to LA, I am willing to have the rest of my wrestling life with my home known as NJPW. Ishimori, congratulations on your defense in front of a packed house, what an incredible match. It has come to my attention that you no longer have a worthy opponent for your belt you got there as you are way too strong and defeated the top 2 wrestlers in this division. But now you have me huh! “

Now that KUSHIDA’s back and Ishimori calls the shots, are you excited for what he has in store for his return in NJPW? NJPW is now getting their Deloreans ready because KUSHIDA is taking Japan Back to the Future!