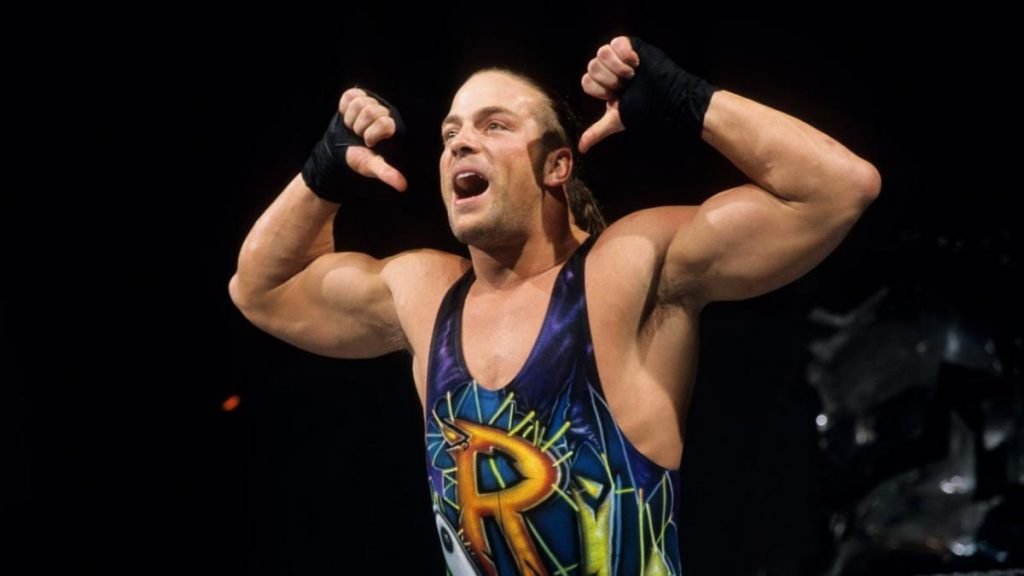 In the world of professional wrestling, some men are the opening act. Others are the main event. Some lie in between, but only one can be the “Whole F’n Show.” Rob Van Dam (RVD) is the “Whole F’n Show.” RVD is known the world over for being an ECW original, as well as his runs in WWE, and TNA. Rob Van Dam began to gain major popularity, and notoriety, in Paul Heyman’s wrestling promotion – ECW. Although Van Dam made his debut and wrestled for independent promotions in the early ’90s, RVD became iconic in the late ’90s in ECW. Some notable memories from RVD’s ECW run stretch from being managed by Bill Alfonso to having some amazing matches feuding with Sabu, and Jerry Lynn. After feuding with Sabu, the two would form a team and would win the ECW Tag Championships twice. Rob Van Dam’s greatest ECW feat would come in 1998 when RVD would win the ECW TV Championship, and hold it for 700 days. The reign would come to an end, only because Van Dam had to relinquish the belt due to injury.

In 2001, WWE would purchase rival company WCW, meanwhile RVD’s company ECW would shut their doors. Many wrestler’s futures were in question, including the “Whole F’n Show” RVD. Van Dam would end up signing with WWE, along with several other ECW, and WCW wrestlers. RVD, alongside the plethora of ECW and WCW talent, would be involved in the “invasion” storyline. This would feature all of the newly contracted ECW and WCW guys joining forces to take on WWE wrestlers. Shortly after the invasion angle, RVD would go on to have some singles and tag success in WWE, becoming Hardcore Champion, Intercontinental Champion, European Champion, and Tag Team Champion.

In 2006, RVD would go on to reach his greatest HIGHS, as well as lowest low. Rob Van Dam would win the Money in the Bank contract, at WrestleMania 22, which granted him a World Championship match anytime, and anywhere. In the meantime of waiting for the perfect moment to cash in, WWE would re-launch ECW, and give Paul Heyman the keys once again. While being Mr. Money in the Bank, RVD would get drafted to the new WWE ECW. Van Dam used this opportunity to announce he would be cashing in Money in the Bank in his home of ECW, for the WWE Championship. The matchup was set. John Cena vs RVD at ECW One Night Stand in 2006, for the WWE Championship. RVD would be victorious, and for the first time in his career, he’d be WWE Champion. Since he was a member of the ECW brand, Paul Heyman stated that the WWE Championship would now be known as the ECW Championship. Instead, Heyman would up the prestige, and award RVD the actual ECW World Championship, on the debut episode of WWE’s ECW. Van Dam was now the only person in history, and remains so, to be the WWE, and ECW World Champion at the same time. The euphoria would be short-lived, as a little less than a month later, RVD would be arrested alongside Sabu, for a different high. On July 2nd, 2006, RVD and Sabu were pulled over for speeding and were found in possession of marijuana. This led to arrest, followed by RVD having to drop the WWE Championship and ECW Championship, on back-to-back nights. After dropping the titles, RVD would have to face a 30-day suspension.

RVD being a “pothead” was no secret to his peers, nor was it a secret to anyone of a higher power. RVD was mainly punished because he needed to hold a specific image, especially at the time the arrest happened, as he was WWE Champion. Other than that, RVD was known to wrestle high nearly 100 percent of the time. He has a move called the “420 leg drop,” and has been a long-time advocate for marijuana use. RVD has gone into scientific studies on the plant, debunking tons of negative ideas that have previously been thought about it. Studies have shown him that the plant can be used for tons of things, other than smoking it, such as resources like fuel just to scratch the surface. He also hopes to bring light to the fact that in the future, the plant will possibly be used as a cure for most diseases.

RVD wouldn’t allow this arrest setback to hinder him from further success. After his WWE contract expired, he would pass on signing a new one. He would hit the independent scene once again and eventually sign with TNA Wrestling in 2010. He’d go on to defeat Jeff Hardy and AJ Styles on the same night, to capture the TNA World Heavyweight Championship. In 2021, RVD would return to WWE under very special circumstances. He’d be inducted into the HALL OF FAME!

Mr. Monday Nights… The Whole F’n Show… RVD has had a pretty incredible career. Thank you for everything you have given to this business, RVD. A career filled with the highest of highs was very well deserved and earned. RVD has also paved the way for the next generation of superstars to be themselves unapologetically. He’s allowed room for superstars such as Riddle, to embrace marijuana, no matter the reason they are drawn to it. Inside the squared circle he’s paved the way for the next generation to give their all to their stunts, and inspired them as we can see with the majority of the current move sets in today’s wrestling, which are very close emulations of the WHOLE F’N SHOW! Thank you, RVD!