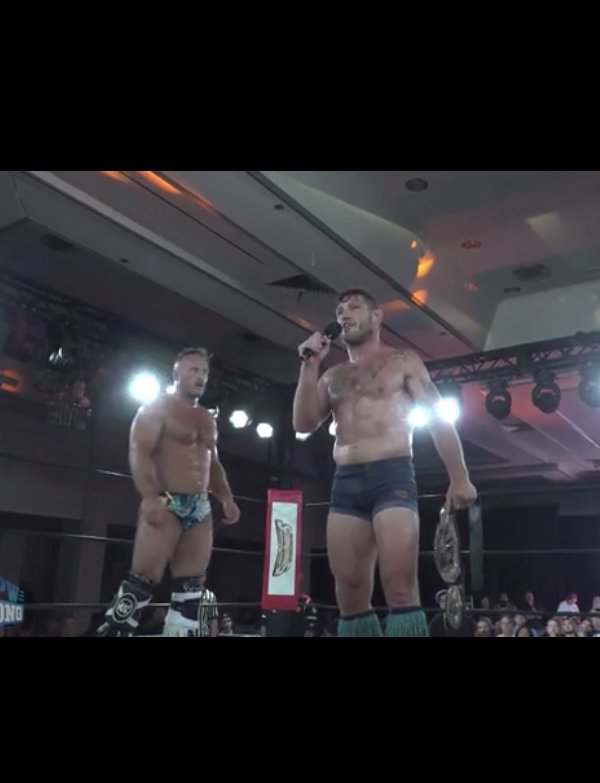 Preview: This week on NJPW strong NJPW has decided to show 3 huge matches that happened at the event called Lonestar shootout that was on April 1st, 2022. we have tag teams with huge story implications such as Bullet club vs Stray dog army. Then a classic David vs goliath match up when ‘the Top Dog’ JONAH takes on ‘All Heart’ Blake Christian in a singles match then followed by the main event of the evening that being Team Filthy which contests of Strong openweight champion Tom Lawler, JR Kratos, and Royce Isaasac take on the team of NJPW Strong rising stars that being ‘Mr No days Off’ Fred Rosser, Alex coughlin, and DKC In a major 6-man Tag!

Bullet Club Vs Stray dog Army: As the Teams make their way to the Ring the Stray dog Army look calm collected and focused as well as United. As for the Bullet Club it was obvious that Hikulo was still feeling a type of way about what Bullet Club did to his brother in Tama Tonga as he did no two sweet with Chris Bey as well as wore any Bullet Club Merchandise to and in the ring.

Match started off with Chris and Brown with a back-and-forth lockup of one of the men trying to get an advantage in strength before Chris bey used his speed to hit a quick snapmare before Brown followed up with one of his own. After the quick back and forth both men begin a quick sequence of hitting the ropes all before Bey hits an extremely beautiful low Dropkick. In response Baron then hits an equally impressive Half and half suplex. After a tag from Baron to Bateman they hit a forceful double team. As the match continues Bateman was taking control before Hikuleo sneaked a tag and hit Bateman with a Big Boot then tossing his body into the turnbuckle pad. As the match progresses ever since Hikuleo tagged in he has taken full control from stiff chops to throwing Bateman around in the Barricade.  Chris Bey who would tag himself in would proceed to drop knees on him before Hikuleo would tag himself in seeing more tension between both men. After about six minutes of Bullet Club Beatdown Bateman finally getting the tag to Brown who picks up the pace getting the advantage for his team in terms of speed before tagging Bateman back in who grogginess was shown from getting assaulted for most of the match. That led to Chris Bey taking out Bateman with a Two sweet Top Con Hilo before Hikuleo hitting a Devastating Chokeslam to get the victory for Bullet Club. However, after the match it still seems there was some feathers in Bullet Club due to Jay white turning on His brothers back at Impact Wrestlings No surrender PPV.

JONAH Vs Blake Christian: The Match starts with the Crowd saying “Jonah’s gonna kill you.” As both men lock up it’s obvious when it comes to the size different with Jonah easily throwing him around the ring. Even as Blake tries to use his speed it seems that he’s no match for the size and power of the top Dog. So Blake goes faster from moving around the ring hitting a top rope 619 then a middle rope 619 before attempting an outside dive all to be caught by the strength oh Jonah throwing him not only into the ring post but then ribs first into the Barricade. The match progresses with Jonah taking control mostly aiming for his ribs potentially setting up for a later finish. Blake Christian would try to come back with a series of strikes before hitting a springboard Moonsault flipping it to a DDT before flowing it up with a Fosbury Flop that he turns into another DDT! Jonah would get into the ring hoping for a moment or rest before getting hit with an amazing Springboard 450 Splash. Blake would try and follow up with a springboard move before Jonah would catch him with a devastating Spear following up with a Back breaking Powerbomb then ended it with a Massive Splash from the top to secure his victory.

GREAT: The Match begin with Fred Rosser and Royce isaacs in the ring before JR Kratos went to attack Alex Coughlin who was on the apron before Fred went after Tow Lawler then DKC Hit a suicide dive quickly before Alex and DKC Hit a quick assisted hurricanrana onto Kratos on the outside. The Match finally slows down to a regular 6-man tag with Fred mostly having his attention on Tom he quickly gets taken down with a Suplex by Royce. As Tom Lawler comes back into the ring before stopping a mud hole into Fred, he then takes time to strut to the crowd only to take Fred down into a sniff Submission hold. After taking a beating Fred gets the tag as does Royce bringing in JR Kratos who clears the ring with quick force and speed taking everyone out before all three members of team filthy stop wrestling to pose in the ring hilariously. After the moment JR tags Tom back in who goes after Fred outside but instantly regrets it as Fred throws him into the barricade to not only follow up with an outside suplex but then an apron back suplex. Back in the ring Alex and JR proceed to have a clash of strikes. Before Alex lifting Jr with a Fireman’s carry failing but dragging the fight outside before Tom and DKC begin to have a Fight in the ring DKC Hitting a flurry of chops on not only Tom but Royce as well as you can see in the background that Alex and JR Kratos fight to the backstage making this a tag team match up. Tom gets adding the pressure on RKC Hitting an amazing takedown as well using him as a weapon to take our Fred on the apron. DKC and Royce begin to continue fighting ultimately before Isaacs hit a huge top rope Powerslam from the top rope to get the victory for Team Filthy.

Overall, this episode of NJPW Strong was a good one. If you did not have the time to watch it on the date it came out, then it definitely was a good throwback type episode for you to enjoy. Of course, since event was back in April you know how some of these stories have adapted over the course of this month as well as the month prior but still an excellent event. You were able to see the dominance of Jonah continue as well as Bullet club continue to gain victories and of course Fred Rossers continuation of not only growing in the ring of Strong but his growth towards a rematch against Tom Lawlor.