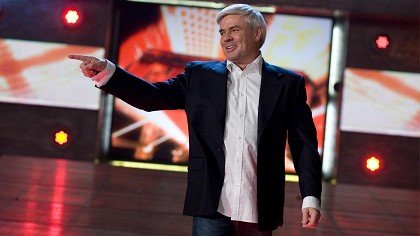 Eric Bischoff gave his opinion on Kevin Owens and the future of the wrestler.

The path of Kevin Owens in the wrestling industry is one of the most remarkable of this generation.

At any promotion, Owens has made a name for himself, and according to Bischoff, he could be on a Stone Cold or The Rock level in the future.

On the newest episode of “Strictly Business,” Eric Bischoff talked about how he thinks there’s more ahead for the WWE superstar.

Pointing to the use of part-time stars and the booking of them to reach an Undertaker level.

During the episode, Bischoff said

“Who thought that Kevin Owens would be the level of star he is in WWE three years ago?”  Eric asked.

Bischoff has worked in the past hand in hand with Owens, specifically back in 2019.

During that year both worked directly as Bischoff was involved on the Owens and Shane McMahon, collaborating with the two on promos.

“I got to know Kevin really well,” he said. “Kevin and I are friends, and I don’t think he’d mind if I’d share this because it’s a compliment, and I mean it out of respect, but Kevin had a hard time of getting out of Kevin’s head when I was working with him … I’m not going to get into it because it’s just backstage stuff, but it was a tough spot [for] Kevin because it was Shane, and I’m tight with Shane too. Shane’s a good dude, but it wasn’t easy in some ways.”

According to Bischoff, throughout all the storylines that Owens has been part of, the wrestler has known how to pave the way and improve his skills as an actor and on the microphone.

With WWE and Owens in a great position to move forward and look for more.

“They together have done an amazing job of elevating Kevin Owens to a point where he’s gonna be a much bigger name in WWE two years from now than he is now, Bischoff said. “And he’s already a big name.” (Via “Strictly Business” podcast)