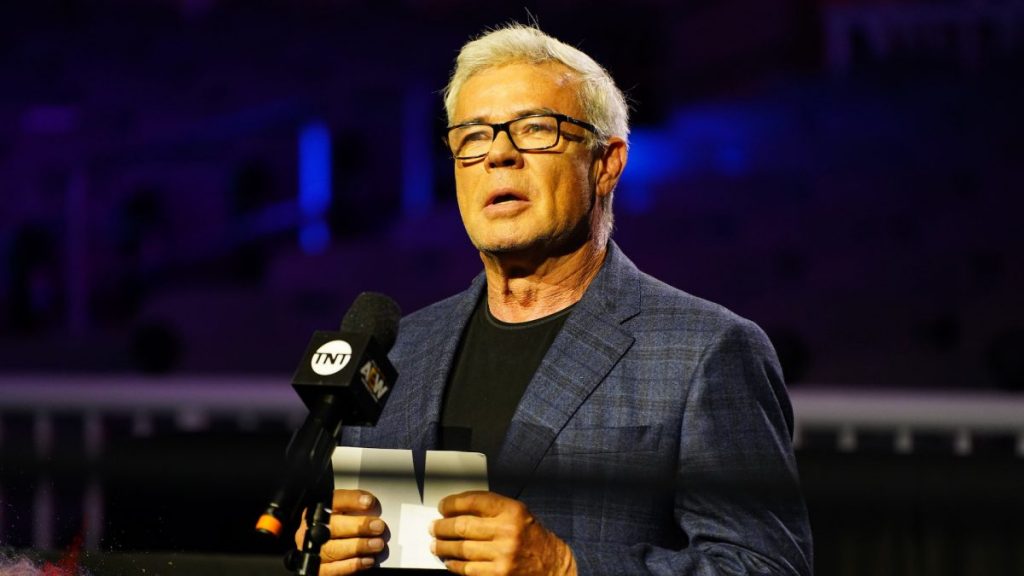 Eric Bischoff does not like Tony Khan’s booking of AEW and explains why it is not competition for WWE, but how it can be.

Eric Bischoff is one of many wrestling insiders who have criticized AEW and its booking. In recent months he got attention for his comments on Tony Khan and his company’s place in wrestling.

Most notably, Bischoff addressed the AEW President directly and said AEW is not competition for WWE. More recently, he attributed the company’s lack of growth to Khan’s booking like a 14-year-old fan.

While speaking with Shakiel Mahjouri of ET Canada and CBS Sports, Bischoff went into detail about the current wrestling landscape. Where he compared Khan to a 14-year-old came when he discussed the impact of WWE’s change in leadership on AEW.

“I don’t necessarily think that he’s got a creative instinct in his body. I think what he’s doing is reliving a childhood memory of ECW and the independent scene and super matches,” Bischoff said. “He’s booking like a 14-year-old who has a lot of toys and a lot of things that he can play with. I’m not seeing a story. We see what the wrestling audience, or the AEW audience, in particular, calls a story. But it’s not. It’s an excuse for having a super match or a dream match.

Despite his harsh criticism, Bischoff offered advice on how AEW could become the kind of competition Khan wants to be.

“If Tony Khan is really smart and his goal is to compete, then he should look at what’s working in WWE from a storytelling and format perspective. He’s going to wake up one day and realize that being a dirt sheet booker and catering to the Internet wrestling community is a wonderful thing because your name is on the Internet all the time, but it’s not going to grow beyond the point that it currently exists because you’re only serving a small segment of the audience and you’re not reaching out to the broader base audience and the more mainstream audience. Not everybody lives, eats, sleeps and breathes wrestling as the Internet wrestling audience does. There’s a more, I don’t want to say passive, but less committed viewing audience out there. That’s important.”

Will Eric Bischoff Return to WWE

In the same interview, Eric Bischoff covered several other topics, one of which was a potential return to WWE. Despite his success and 30 years in the wrestling business, he doesn’t see there being much need for him.

“There’s no need for me. What I have to contribute at this point, we’re beginning to see on television. Maybe this is just me being hyper-optimistic because the last decade of wrestling has bored the F out of me. It’s so hard, you know, I want to be excited. I want to be interested. I’ve been in the business for 35 years or 30-some-odd years. I want to be excited about the business, but it’s just bored me for such a long time. I had a bit of hope with AEW. Up until probably six or eight months ago, I kind of threw in the towel because I started seeing the same pattern of whatever over and over again. I thought, ‘Okay, something different, something different.’ But there’s been nothing different out of the WWE either. I’ve been pretty critical of WWE as well. I make more headlines when I’m critical of AEW, but I’m actually just as critical of WWE.

“Maybe just because I’m getting a little bit of an indication that something really good is coming, I’m overly excited. But if I’m right, then what the hell would I have to contribute? They don’t need me. That discipline and that story structure and a commitment to the format and episodic television is the one thing that separated me from everybody else that was doing it for a long time. But if they’re figuring that out in WWE, they don’t need to spend a plane ticket on me.” (H/T WrestlingNews.com)