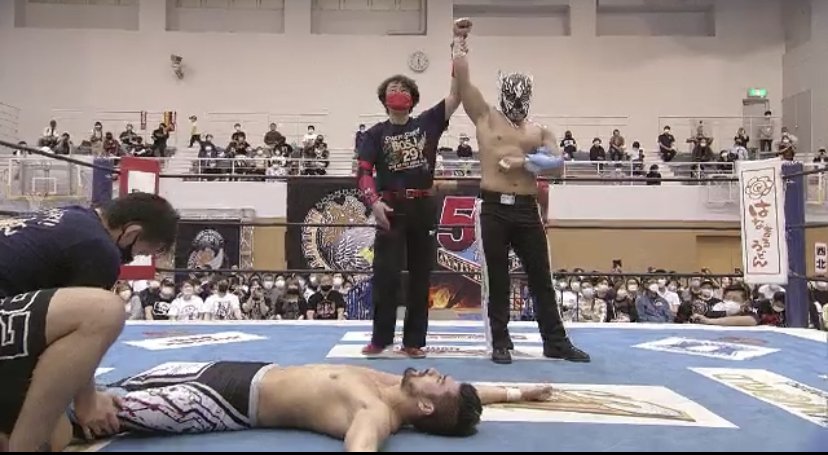 Overall, this tournament is getting better and better with these matches. More people are stepping up giving us the type of matches that fans like to see. Especially some people as matches are now getting longer then 10 minutes moving more toward the 15-20 Zone which is always great. Glad to see Some undefeated guys in as well. ELP and El Desperado are running the block with Six Points.

Preview: Hello! Today we have day 6 of the BOSJ tournament! We have many names today looking for a chance to shine. Most men have two points and others have four and some are looking for an advantage let’s see what happens on today in the B Block!

BELOW AVERAGE Robbie Eagles Vs Douki: Both men start the match with a good lockup before hitting a sequence of someone going for an advantage. The match would Progress as Robbie would have a small opening before they end up going to the outside after Douki would hit a dive to the outside. After some back and forth it would seem like Douki would aim towards the neck of robbie hitting stretches and neck breakers. As Robbie would fight back, he would try and aim of course for the legs trying to set up his finisher the Ron Miller Special. As he would continue to assault the legs Douki would hit the Italian stretch 38 further hitting the neck before hitting a picture-perfect jumping DDT via springboard. Robbie would fight back hitting moves toward Douki knee as well as his signature Turbo Backpack. After some time passes of both men fighting back and forth Douki would look for the more offense before Robbie would reverse his move into the Ron Miller special winning his match and moving to four points.

AVERAGE TJP Vs El Lindaman: This match would start very technical as both men were waiting for mistakes as TJP would get the advantage by hitting a lower head scissors before El Lindaman would hit a Neckbreaker in the corner. After a while of hand-to-hand TJP would begin his focus towards the arm after a arm snap before turning to the scorpion death lock attacking the legs before going into the Muta Lock. TJP would continue control for this match mostly hitting moves towards the arms but would hit other moves such as the Boot Wash. But back in the ring El Lindaman would fight back hitting an exploder suplex sending him outside before hitting a Tope con Hilo back in the ring EL Lindaman would hit some quick offense onto TJP trying to build his momentum but would be stopped by a misdirection DDT switching the momentum before looking for the mamba splash. Back on the feet EL Lindaman would get up and Dropkick TJP then follow it with a a suplex. Both men on there feet now fight back before going back got the ground game where TJP Hits a STF. El Lindaman would fight his way back to his feet hitting a German suplex to win the match.

BELOW AVERAGE Master Wato Vs Bushi: Bushi attacks before the bell before the bell but getting no advantage. On the outside of the ring Wato hits a five before getting thrown into the ring post by Bushi and followed with a DDT. Bushi continues his assault from outside into the ring now hitting moves like neck breakers before aiming for a neck. Wato would get some momentum hitting a tilt a whirl backbreaker then a Dropkick before hitting another dive on the floor to the outside. Back in the ring Wato took the advantage further hitting springboard moves as well as some knees and some kicks. Bushi would get back to his feet hitting a Dropkick then a Apron DDT spiking Wato head before both men begin to fight with Elbow strikes and trade each other’s best shots. Master Wato would go for a top rope move but move before hitting a Lungblower then the MX to secure the victory.

AVERAGE EL Phantasmo Vs Titan: Match would start with both men trying to get some ground in wrestling Titan would show his speed as ELP would show his fun style doing flips and struts. But Titan all business would hit a springboard Dropkick then mock him. Titan would go for more offense, but ELP would take him down with a DDT on the outside. Back in the ring ELP would focus on the hands of Titan and hit a couple of springboard moves but would find their way on the top rope where Titan would hit a stalling Hurricanrana on the tope Rope before following with a backdrop gaining momentum. To continue Titan would hit a moonsault to the outside landing on his feet after. Back in the ring both men would exchange roll ups before ELP hits a nice Powerbomb but then would start going for the mask trying to take it off going to the rope trying for a better grip, but it would end badly as Titan would use it to hit a Death Valley Driver before following it up with a springboard double stomp but not able to get the pin. After some back and forth ELP would get hit by a massive move before accidentally taking Titan masks off then hitting a huge Superkick before hitting his CR2 finisher.

GOOD El Desperado Vs Wheeler Yuta: Match would be very technical in the start favoring Wheeler Yuta who would have control the entire time keeping the focus on the arm. After a moment Desperado would retaliate and start his attack towards the knee hitting some low dropkicks on it then throwing it against the apron as well as the ring post. Back in the ring the target has stayed the same with Desperado putting that focus on the knee. But Wheeler would fight back with some small offense like dropkicks and clotheslines before following it up with a topay suicida. Back in the ring he scores with the Crossbody. After some more attempts to go for his signature desperado would go back to the first method and attack the legs hitting a stretch muffler on the leg. Desperado would lock it in once again before trying to turn it into Numero Dos. Instead of the ropes Yuta would turn it into a Armbar before Cattle Mutilation before Desperado would hit the ropes. Back on the feet Desperado would hit a Spinebuster into his signature move. Both men on their knees would exchange forearms before Then aiming toward injured body parts before Yuta would hit Pain-thriller then some nasty elbows Hes known for but before he would hit the roll up Desperado would counter into the Pinche Loco before going for another one, but they would trade Pinfalls before Desperado eventually hitting the second Pinche Loco for this win moving him to six points in the B Block!

Overall, this tournament is getting better and better with these matches. More people are stepping up giving us the type of matches that fans like to see. Especially some people as matches are now getting longer then 10 minutes moving more toward the 15-20 Zone which is always great. Glad to see Some undefeated guys in as well. ELP and El Desperado are running the block with Six Points.