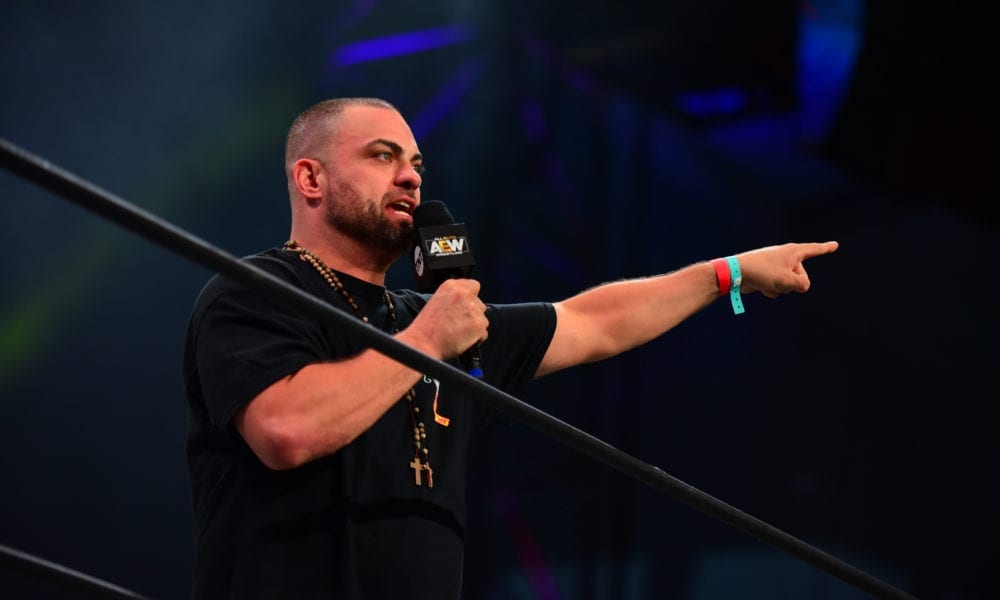 Eddie Kingston is known for being one of the best there is on the mic, often cutting scathing promos on opponents. His flurry of words isn’t exclusive to his promo work as he isn’t shy about saying how he feels during interviews.

Eddie Kingston has been feuding with Chris Jericho and his Jericho Appreciation Society these past few months, but that’s not all. Kingston seems to now be butting heads with Bryan Danielson, as seen when they butted heads these past few weeks.

While speaking with “Weekend Joe” Eddie was asked about his relationship with the Blackpool Combat Club member. There doesn’t seem to be any love loss between them as he didn’t have much of anything nice to say.

“Longer than Mox, I’ve known Bryan, and Bryan’s been a piece of sh*t since I’ve met him,” Kingston explained. “I’m not going to lie to you guys and be like, ‘Oh yeah, we’re best buds.’ No, I don’t.

“Bryan, in my opinion, should be on a lot of Mt. Rushmores for wrestling. You could go independents, you could go now if you’re talking about technical wrestlers. All this stuff, Bryan is in the G.O.A.T. discussion with anybody. But I’m not a mark, I’m not a fan. If I think you’re a bad person or, for Bryan, I think he’s a judgemental pr**k. He judges people, so I don’t like Bryan.”

Eddie never mentioned a particular incident that sparked his ire, but Danielson has never hidden from his backstage conduct. Danielson has often called himself a “bully” and even elaborated on this claim while speaking with The Ringer Wrestling Podcast.

“I start to bully people around a little bit, and people will laugh and think that’s funny, but it’s very true. I don’t bully people I don’t know. I bully people like Paul Wight and Mark Henry.” Danielson said. “When I came in, and Paul saw me, he goes, ‘Oh no, the bully’s back.’ On Wednesday, I said, ‘Yeah, I’ve just now started bullying Lee Moriarity,’ and he goes, ‘You won’t bully me.’ Like, just dead straight. I love that.” (H/T WrestlingNews.com)

Danielson has been off TV since Double or Nothing due to a concussion and there’s no word on when he’ll return. As much as they dislike each other, Kingston and Danielson will team once again on June 29.

This time the Jericho Appreciation Society will face Kingston, Santana, Ortiz, and the Blackpool Combat Club in Blood and Guts.