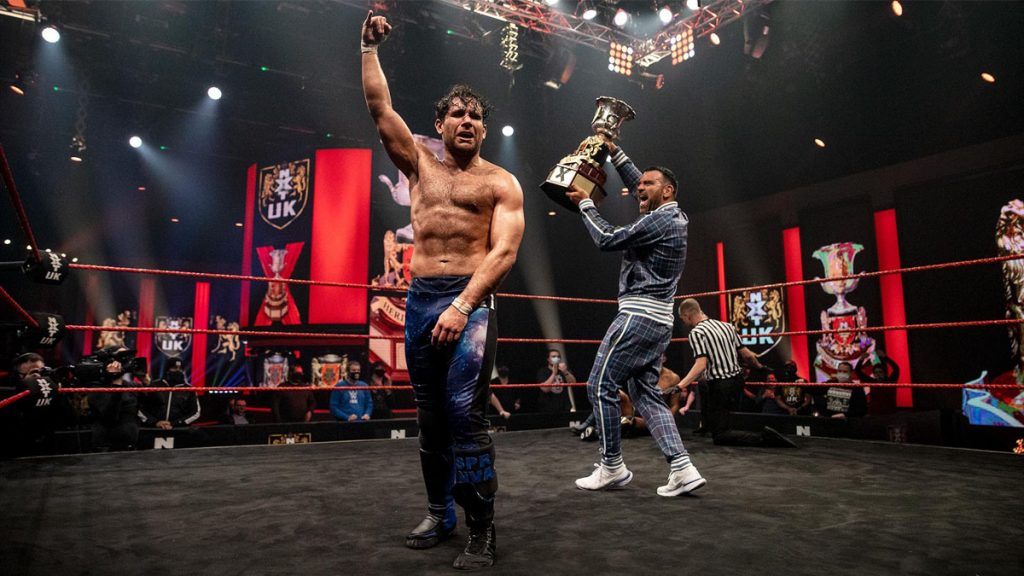 Preview: Tonight marks the first show of a new era, a new era without the Ring General Walter or… Gunther… NXT UK is giving us our second championship match of the year with a Heritage Cup Championship Main Event with Number one contender the Spanish Sensation A-Kid looking to be a two-time Heritage Cup Champion by defeating the current champion, Noam Dar. We also find out if Sam Gradwell has any friends that will have his back against Pretty Deadly. We are inching closer to Ilja Dragunov Vs Jordan Devlin next week as well. Let’s see if NXT Uk is a little more enjoyable this week.

Sam Gradwell has become the guy in the locker room that has bad jokes, calls everyone Yoghurts, and doesn’t have any friends. I think this video package was quite entertaining, especially seeing some of the tweets he had actually made. Sam knocked this finding a partner out of the park. This was a pure example of comedy done right.

Overall this was a fun match, both teams got a chance to look good. Saxon Huxley has some unique offense and Sam getting the hot tag was great. Pretty Deadly is a great heel tag team and I enjoy watching them work. Kenny Williams distracting Saxon in order to attack him helped Pretty Deadly get the victory. The crowd was clearly on Saxon and Sam’s side.

Results: Sam Gradwell is pinned after the Spilled Milk finisher by Pretty Deadly.

This was a good promo by Jinny, she makes a good comparison between herself and Amale as they both have similar stories. Jinny is that rich b*tch and Amale is looking to be one to inspire. Jinny is always improving in the ring and I’m sure they will have a fun match together.

GANG WARZ: Gallus Vs Die Familie is official for next week!

Fun Recap and promo package for the GANG WARZ as well.

I think this was one of the first promo packages that I have seen that is building the character for Blair Davenport and I feel this was done very well. Blair Davenport is a good talker and looks like a great heel for the women’s division as she is preparing to show a fiercer side. It is obvious Blair Vs Meiko will have another go and I am excited.

This match was a solid contest, all moves were done fairly well and nothing looked that bad. I think Isla Dawn has a unique finisher. Emilia Mckenzie had some good offense and Isla did as well. I find Isla Dawn to be rocking her gimmick with her dark look, her pale skin, and overall she looks really good for her character of this Unholy Enchantress.

Results Isla Dawn gets the victory.

I think Jinny is the better talker but Amale has a more meaningful gimmick. Amale’s dialogue against Jinny’s promo was alright. Nothing to complain about but nothing that good.

Overall this rivalry is built on the story of someone who fights for himself and someone who fights for his family. Ilja Dragunov and Jordan Devlin have had some great promo videos and this one was just as good. Jordan thinks he has the advantage against Ilja with the new stipulation being an empty arena match next week. I am ready for them to tear the house down.

Heritage Cup rules always provides a multi-layered match from the early goings of the match, from Noam getting fall one, to Sha encouraging Noam to get the win in round 4 only for A Kid to get his fall there. Both of the final rounds ended with A-Kid being so close to winning the match. I am excited for match 3 between these two.

Overall the match quality and in-ring ability of the wrestlers had a step up. The promos that were done in the broadcast all felt good and are working towards next week. The Heritage cup continued to provide fun and enjoyable matches and for I believe the first time we saw a Draw finish. A-Kid is being built up to some degree to either finally win the big one either in the Heritage Cup again or the NXT Uk championship. Great stuff NXT UK!