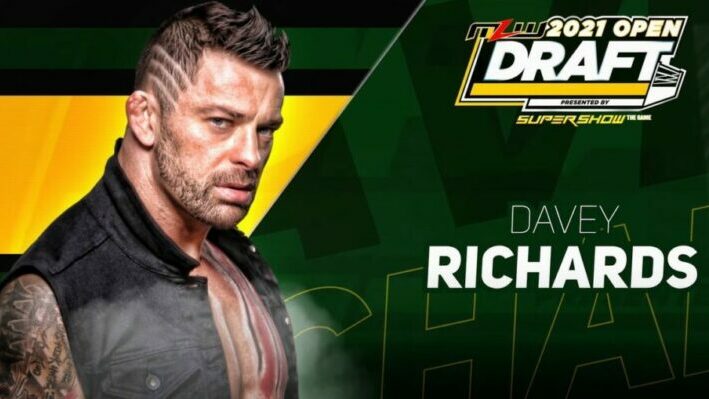 It was announced in March that former Ring of Honor Champion, Davey Richards, would be making a return to world of professional wrestling. With this announcement came a lot of talk amongst fans on where The American Wolf would go.

The last time Davey Richards was inside a wrestling ring was in August of 2017 where he unsuccessfully defended the CZW title against Shane Strickland, in a fatal four match that also involved Joe Gacy and Lio Rush. Richards was supposed to compete at Evolve 22 and 23 in September 2017, however due to knee injuries, he would undergo surgery that would cause him to cancel his bookings for the rest of the year. He then announced he would take all of 2018 off to focus on his studies, before announcing retirement in 2020 due to the aforementioned knee injuries.

However, during the first round of the MLW Draft, it was announced that the former DEFY Champion has officially signed with Major League Wrestling. When speaking with Alicia Atout of MLW, Richards said he had “A lot of offers from a lot of different companies”.

“MLW just really stuck out to me, as being more more aligned with what I feel professional wrestling is, which is sport oriented.”

– Davey Richards to Alicia Atout during the MLW Draft

Major League Wrestling just recently held their season finale on May 5th, so we’ll have to wait almost another two months until Davey Richards makes his MLW debut/professional wrestling return on July 10th when MLW returns with a new season of Fusion with crowds. It’ll be interesting to see what the veteran can do after nearly four years out of the ring, but here’s hoping that it’s spectacular.

What do you think though? Are you excited to see Davey Richards return? Let us know in the comments below.