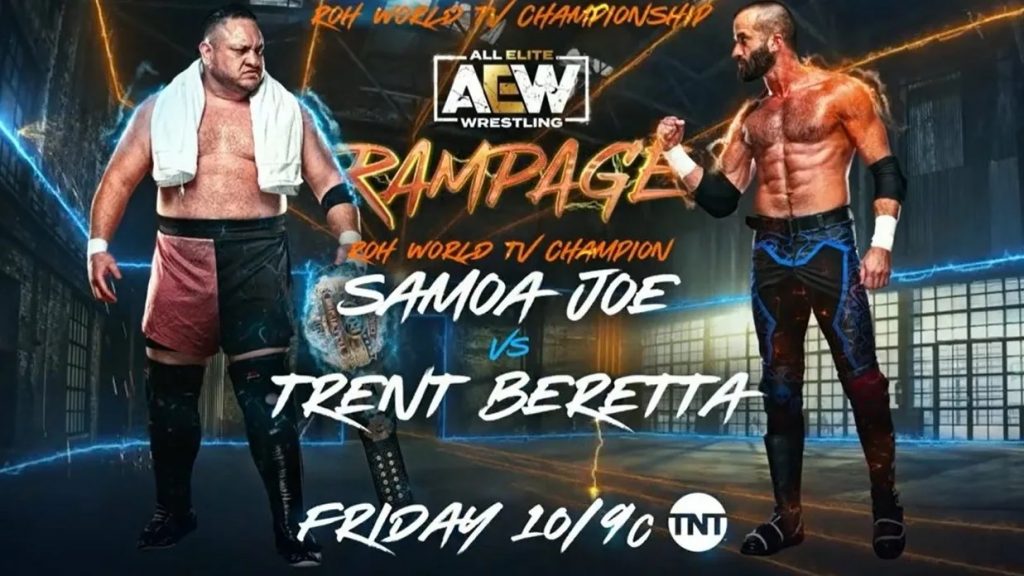 Preview: This is a pretty nice Rampage card from top to bottom, featuring some of the faces we’ve come to expect on Friday nights. In an Owen Hart Foundation Tournament qualifying match Darby Allin faces Swerve Strickland. Keith Lee is set to take on Colten Gunn of the Gunn Club and AEW TBS Champion Jade Cargill is in trio’s action. Samoa Joe will defend his ROH Television Championship against Trent Barretta, also finally Danhausen and Hook will have a face to face confrontation.

GREAT Darby Allin vs. Swerve Strickland Owen Hart Foundation Tournament Qualifying: Swerve and Darby show each other respect and the match gets going. These two are so quick it’s an early back and forth to start us but neither can hold the other one for very long. Darby works the arm of Strickland and then grounds him with a rear chinlock. Swerve uses his agility to get back to his feet but Darby goes back to the hammerlock and is still controlling Strickland. Darby is sent to the outside by a hip toss but when Swerve goes after him he is met with a stunner from Allin. Darby tries to follow with a tope suicida but is met with a knee strike from Strickland. Swerve runs across the apron and delivers a boot and he looks to be in control for the first time in this one as we head to commercial. During the break Strickland remains in control of Allin and he goes to work on Darby’s neck and shoulder. Darby is able to roll into a kneebar and now Strickland is in trouble again as we return from the break. Swerve breaks the hold and transitions into a snap suplex right away. He pulls Darby into the corner and attempts the Swerve Stomp but it misses and Darby responds with Code Red and a near fall. Allin tries for the Coffin Drop but Strickland gets his knees up and hits Darby with a single leg dropkick. He then lifts Darby up for a suplex from the ring apron all the way to the floor. Allin has barely moved since the suplex and Swerve throws him back in the ring. Ricky Starks throws down his headset and makes his way to the ring to interfere, but Sting is there to stop him. Back in the ring Darby uses an ankle pick to roll up Strickland who is distracted by Ricky Starks. That is the end of the match. This was a super exciting back and forth match, and Swerve and Darby were both really good. The finish was a little convoluted but the rest was definitely worth the watch.

Shawn Spears backstage promo: Spears is talking directly to Wardlow, referring to him as a pig and hyping up his opponent for next week. He repeats the 7 foot tall and smarter sentiments from last week. The opponent still hasn’t been officially announced. Too short to rate but he has to be talking about W. Morrissey.

Chris Jericho’s Sports Entertainer of the Week: Jericho announces himself as this week’s recipient of the award, and just as he is explaining why he is attacked by Santana and Ortiz. Security runs in and restrains Santana and Ortiz but plenty of damage is done. Too short to rate but definitely extended the JAS and Santana, Ortiz and Kingston rivalry.

AVERAGE Jade Cargill, Red Velvet and Kiera Hogan vs. Trish Adora, Skye Blue and Willow Nightingale: Jade starts the match for her side but tags in Red Velvet before any physicality. Velvet is in control of Skye Blue and tags in Hogan who eats a superkick from Skye Blue. The Baddies have shown some nice teamwork so far. Jade is brought in and she delivers a huge pump kick to Trish Adora before lifting her up for Jaded. That is it and Jade Cargill is still undefeated. The Baddies celebrate by fanning themselves with money in the middle of the ring.

Result: The Baddies by Pinfall via Jaded

Darby Allin and Swerve Strickland backstage interview: Darby tells Swerve he didn’t want it to end that way, and that if he wants to go 5 more minutes he’s willing to. Swerve says he knows that Allin didn’t want things to end that way and that he’s rooting for him to win the Owen Hart Cup for the Pacific Northwest. Too short to rate.

GOOD Keith Lee vs. Colten Gunn: Gunn is already in the ring as Lee makes his entrance. The crowd is as usual hot for Keith Lee. He stares at Colten who doesn’t seem intimidated yet. They lock up and Lee sends Gunn into the corner. Gunn tries to shove Keith Lee who only finds it funny. Lee chops Colten so hard it echoes through the screen. Austin Gunn tries to distract Lee but it doesn’t work for long as Lee tosses him into the guard rail. Out of the break Lee connects with a massive shoulder block and then biel throws Gunn across the ring. Austin jumps on the apron and the distraction allows Colten to go for a Famouser but Lee hits him with the Big Bang Catastrophe and that is the end of this one. This was a nice showing for Keith Lee in what almost could be called a squash. Not quite though as Colten did get in a decent bit of offense.

GOOD Danhausen and Hook face to face: Danhausen makes his entrance and he is here to decimate and annihilate the one they call Hook. Without further adieu Danhausen asks for Hook to be sent and the kid is on his way. He gets right in Danhausen’s face, which is making Danhausen have second thoughts. Danhausen suggests that they do this another time and Hook responds by saying, “we’re doing this right now,” before they are interrupted by Smart Mark Sterling. The crowd hates it, but Tony Nese blindsides both Hook and Danhausen. Smart Mark tries to help Nese but he’s hit with a Judo throw from Hook. Danhausen curses Tony Nese and Smart Mark and they storm to the back. Danhausen then attempts to shake Hook’s hand but Hook is not having it as he throws Hook to the side by the throat and leaves to end the segment.

GREAT Samoa Joe vs. Trent Beretta: Trent enters first to a pretty nice reception from the fans. The reception for Joe is probably the biggest pop of the night. Joe drills Beretta with a shoulder block and then follows with some jabs in the corner. The action spills to the outside where Trent lands a single leg dropkick and then an acai moonsault. He chops Joe on the outside and tries for a tornado ddt but Joe is able to reverse and score on a big boot. We head to commercial break and back inside the ring Joe is controlling the action as the Best Friends cheer Trent on. Joe has a brief staredown with Orange Cassidy before turning his attention back to Beretta. He hoists him up for a powerbomb but Trent wiggles out and lands a dropkick sending Joe outside the ring. Beretta then scores on a cross body off the top rope but Joe seems to be recovering. Trent hits a tornado ddt this time but Joe kicks out at 2. Joe then scores with a powerbomb and follows up with a crossface. They trade chops in the middle of the ring before Joe grabs the momentum with a clothesline. He sends Trent into the corner and tries for a Muscle-Buster but it misses. Trent has his opening briefly but Joe gets him with a Uranagi and then locks in the Coquina Clutch. This match was really exciting and Trent did a heck of a job on the other side of Joe.

Post match interview: Tony Schiavone tries to interview Samoa Joe but they are interrupted by Jay Lethal, Satnam Singh, and Sonjay Dutt. Orange Cassidy gets in the face of Satnam Singh fearlessly but is blindsided by Dutt. Jay Lethal uses the distraction to get his hands on Samoa Joe and it is bedlam in the ring as the show ends with Joe and Lethal being separated by security. Too short to rate.

Overall: Overall this was a fine and entertaining Rampage. Swerve and Darby put on a back and forth Owen Hart Foundation Tournament qualifying match in the opener, and Ricky Starks inserted himself into the action to extend the feud between him and Swerve Strickland. The Baddies worked as a trio for the first time and picked up a victory. Colten Gunn took his first loss in singles action against Keith Lee. Samoa Joe was able to retain his ROH Television Title but still has both Jay Lethal and his crew to deal with in the future. Hookhausen was teased, and I’m here for it. Oh yeah, Chris Jericho gave himself the award for sports entertainer of the week. It wasn’t the best Rampage they’ve ever put on, but enough storylines were advanced it was worth the watch.