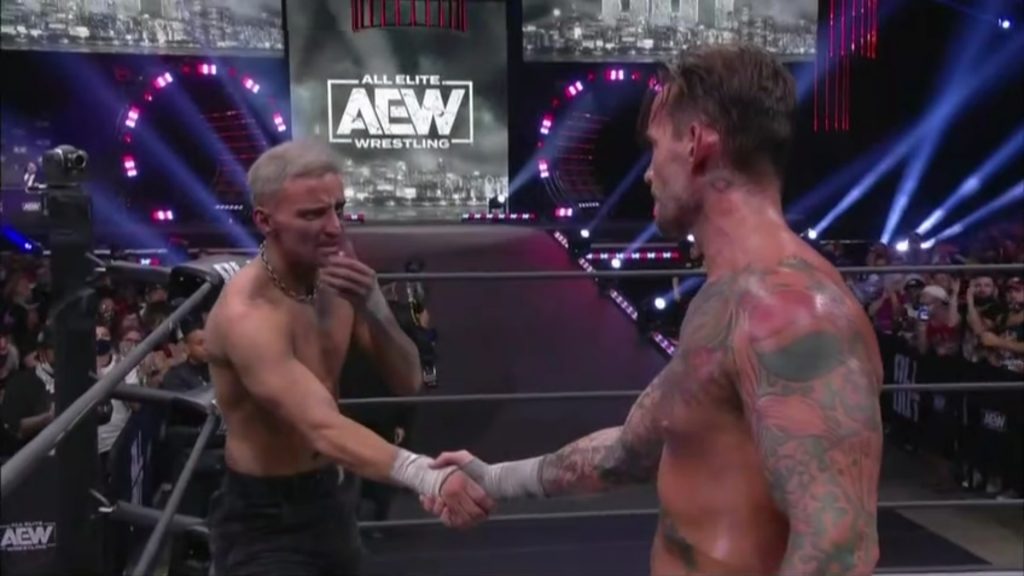 This past year has been quite eventful for Darby Allin, from teaming with Sting, to then his coffin match against Ethan Page, but his biggest moment would be his match against CM Punk after his return to the ring and now Allin has revealed his reaction when he was told about the match.

Before his match against MJF at Full Gear this coming Saturday, Allin had an interview with Chris Van Vliet on his show “Insight with Chris Van Vliet”, where the topic of his reaction to having a match with CM Punk after his seven year hiatus from wrestling was discussed.

Allin spoke about his reaction to the match after speaking with Tony Khan:

“I was talking to Tony (Khan) on the phone.  You don’t believe something until it happens, and then once I cut the promo about the best in the world that aired in North Carolina, I knew that it was a done deal and it was go time.  That was the highest pressure moment ever because I knew everyone was going to be watching him because it’s such a big thing.  Seven years, holy shit, that’s a long time.  For him to leave wrestling the way he did and to come back, people weren’t sure if he ever was going to come back.  So, when he did, and I was the first opponent, I was so nervous.”

Furthermore, Allin spoke of his mindset on the day of the match:

“I was in a zone, and I’ve been in a few zones in life, but like I was in a zone that day where I was like it’s not going to get more nerve wracking than this.  It’s cool to get moments like that because it does make you mentally stronger.  But it started hitting me hard because I remember when he left wrestling in 2014, it was the same year that I started wrestling.  At the time he was my favourite wrestler.  Besides the whole straight edge, it was the punk rock, and the I don’t give a shit about what you think about me attitude.  It was cool as a kid watching him, but then it hit me.  When he left, I was a dishwasher, and dude, life is a trip, so I got a little teary eyed before that match.”

Could we see a better year from Allin in 2022, with either a world championship reign or maybe a re-match against Punk, with Allin coming out on top this time?