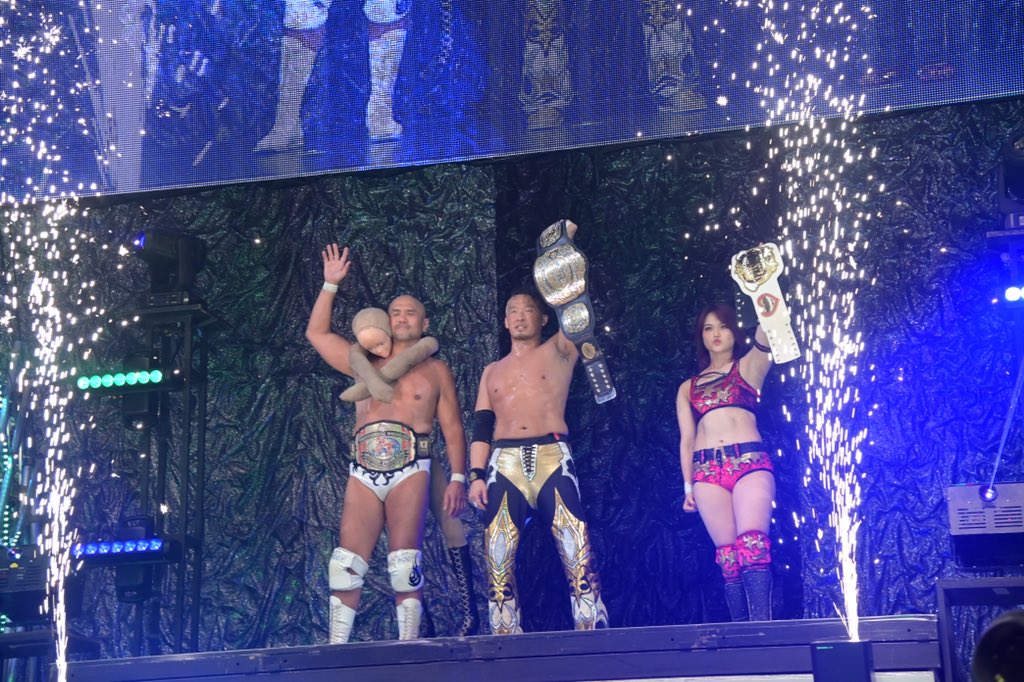 CyberFight is here and this is the first experience for the Pro Wrestling fans when they see Ganbare, DDT, NOAH, and TJPW have a show together in one night and has some inter-promotional match too!! This show featured three main events where all of the main champions in their respective company defended their title. Miyu Yamashita will defend her Princess of Princess championship title against Yuka Sakazaki, and then we got Jun Akiyama that will have to defend his title against HARASHIMA, and in the main event of the night, we got Keiji Mutoh has his 3rd title defense against Naomichi Marufuji.

AVERAGE: In the first match of the night, we got the first DDT vs NOAH inter-promotional match between Yuki Iino/Tol Kojima vs Junta Miyawaki/Kinya Okada. for an opening match, this was really fun with Iino being such a hype man by turning the crowd over to team NOAH. There was a chop fight between the competitors too which was fun to watch. Miyawaki made Kojima tapped out with the armbar, for the win.

GOOD: TJPW OFFER 3-WAY Tag Match is underway between the team of Rika Matsumi/Miu Watanabe, Shoko Nakajima/Hyper Misao, and Nodoka Tenma/Yuki Aino. This match felt different and it was really unique with variations of movesets from all the competitors. Nakajima & Misao were the MVPs of this match by going over with the crowd and their chemistry together was amazing. Nakajima gave a senton from the top rope, for the win.

GOOD: Another inter-promotional match is here and it’s one of the unique match cards out there when DDT Comedy (Super Sasadango Machine & Dieno) came out first to explain how to win against NOAH MMA (Sugiura & Sakuraba) in a funny way. it felt like Drew Gulak’s PowerPoint presentation on WWE but it was better.

BAD: Sugiura & Sakuraba put their custom titles on the line against SSM & Dieno. This match overall was just a comedy match. This match felt like a filler after some actions in the first two matches. NOAH picked up the win after Sugiura made SSM tapped out. Sugiura also apologized to the crowd after giving a bad match.

GOOD SQUASH: Up next is a one on one inter-promotional match between NOAH’s former Kongoh member, Masa Kitamiya vs DDT’s Rookie, Hideki Okatami. This match started with a quick offense from Hideki, however, Masa Kitamiya started to counter the attacks from Hideki and ended it with a prison lock, for the win.

AVERAGE: up next is another TJPW OFFER Match when the team of Itoh Respect Army (Maki Itoh, Yuki Kamifuku, and Marika Kobashi) took on (Mizuki, Hikari Noa, and Yuki Arai). Overall, this match was decent with the focus of this match on Maki Itoh’s spirit with the crowd. Mizuki also gave a really good offense to the Respect Army. Itoh Respect Army won the match after a lion tamer from Itoh to the opponent.

GREAT: NOAH’s OFFER 6 Man Tag is next and it was between Stinger and the team of Atsushi Kotoge, Daisuke Karada, and Hajime Chara. this match was awesome in terms of in-ring and the overness of the crowd. the one on one battle between Yoshioka that used his quickness and Daisuke’s power was awesome. However, Daisuke’s power won after he countered the quickness of Yoshioka to the bridging German Suplex, for the win.

GREAT: DDT’s OFFER 6 Man Tag Match was next and it was Damnation took on the team of Chris Brookes, MAO, and Shunma Katsumata. This match was awesome from the start to the finish. Chris Brookes gave a lot of interesting offense by being the extreme champion. However, Damnation’s chemistry cannot be beaten where their strategy was really good in this match. Daisuke won the match for Damnation by making MAO tapped out to the Ring of Saturn.

GREAT: One of the most awaited matches was next and it was DDT vs KONGO. This match had the most interesting storyline after KENOH had to break the forbidden door when he went to DDT. This match felt like an avengers match at the start after some chaos going on. Yukio Sakaguchi & Nakajima then had an interesting battle of strikes. The match then got interesting when Kenoh hit Takagi with the bike. The match ended when Yukio Sakaguchi & Yoshihiko gave KENOH the sleeper hold, while Kenoh is distracted, Takagi used the chance to win the match by giving one of the members of KONGO a Sitdown Himawari Bomb.

GREAT: After the match ended, Takagi took the mic and yelled to Kenoh, THIS IS DDT! Takagi said that they’ve been doing this for 24 Years and he wants to become the no.1 in the industry. he also said NJPW is in front of them, and also WWE is in front of NJPW. Takagi said that he’s out of his mind by saying that, but he’ll make it happen as a group, DDT/NOAH/TJPW/GanPro together.

MUST WATCH: In the final DDT vs NOAH inter-promotional match, we got The 37KAMIINA (Konosuke Takeshita & Yuki Ueno) vs Kaito Kiyomiya & Yoshiki Inamura. This was overall an amazing tag match with Inamura being an actual beast by tossing Takeshita & Ueno. Takeshita & Ueno also had a beautiful showing as a team. This match ended with Ueno hit Kiyomiya with the BME, for the win.

MUST WATCH: Princess of Princess Championship match time!!!!!!! Miyu Yamashita defended her title against Yuka Sakazaki. This is actually the first TJPW singles match that I’ve ever watched in my life, and I’m impressed with it!! Yuka & Miyu are some crazy women, they hit a lot of awesome spots. the spotlight of this match was the brainbuster on top of the apron. Miyu Yamashita gave two brutal V Triggers to Yuka Sakazaki but it didn’t enough to beat her. Miyu gave the final Crash Rabbit Heat to Yuka Sakazaki, for the win!

GREAT: In the second main event of the night, KO-D Heavyweight Champion, Jun Akiyama, defended his title against HARASHIMA. This match started hot with Akiyama dominating the match with some big spots to HARA. The problem with this match was there’s a couple of moves from Akiyama that didn’t really hit the opponent. Fortunately, the camera shots saved the match. Jun Akiyama made HARASHIMA tapped out with the guillotine lock to retained his title.

MUST WATCH: It’s time for the third main event!!!! The Legend, Keiji Mutoh defended his title against Naomichi Marufuji. Keiji Mutoh is absolute madness, 58 years old, and still moves like a young-born talent. Marufuji & Mutoh’s technical stuff also went really well and it didn’t drag so much. There was a couple of false finishes and it was done beautifully. Marufuji hit a knee strike to end Keiji Mutoh’s 114 days of a great title reign.

For an event that just took place this year, this show was successful from the start to the finish. It started really decent with some introduction to some rookies of the companies, then it picked up its pace with so many great matches and defenses. The problem with this PPV was probably the production because there were a couple of bad camera shots. Also, the wrestlers from across the company didn’t really have that chemistry yet because of different styles and connections. Overall, this PPV was awesome for people that wanted to start watching DDT, NOAH, and TJPW.