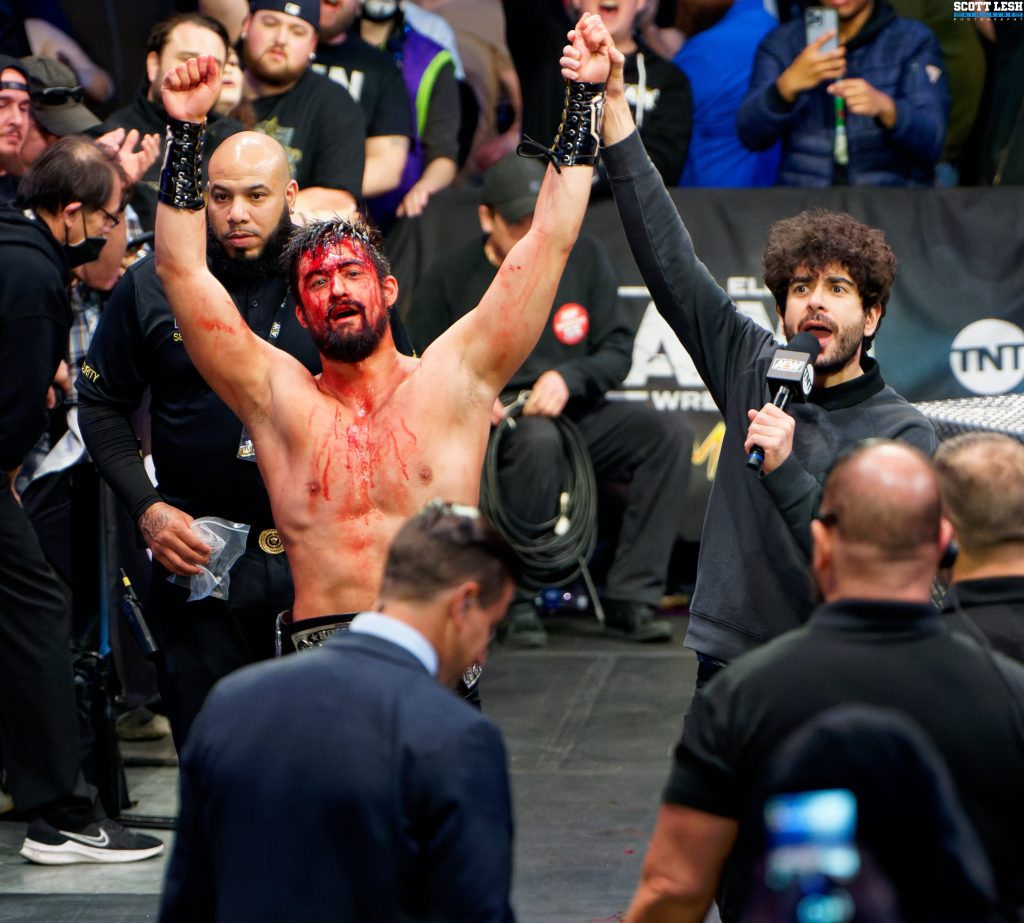 Preview: AEW Rampage brings two primetime matchups involving the newly formed Blackpool Combat Club. Wheeler Yuta takes on Jon Moxley, in an effort to advance his quest to prove himself to all three members of said Combat Club. Trent Baretta and Bryan Danielson lock horns in a match that was plugged on Dynamite. We’ll see if Trent is able to back up his strong words to Yuta about his intentions for tonight.

GREAT Bryan Danielson vs. Trent Beretta: Bryan and Trent start with a test of strength and Rampage is off and running. Regal is on commentary, he mentions that he’s known Trent for 15 years, and he’s one of the best, but he’d be even better if he didn’t hang out with the, “half-wits,” he does right now. Beretta is off to a hot start, out striking Danielson. He’s been one step ahead of Bryan, neutralizing his attempts to make this a grappling contest. Trent attempts a slingshot dive over the top rope towards Danielson on the outside, but Bryan lands a well placed kick to the gut. As Danielson gloats, he waits too long and when he attempts the tope-suicida Trent is waiting with a saito suplex on the floor. Bryan evades a spear attempt by Trent and he crashes and burns into the steps as we head to the break. Danielson takes a risk by heading to the top rope and Trent has it scouted with a superplex. The pace has ramped up and they continue to go move for move with each other. Trent is absolutely in this match, and it has been a fast paced opener for sure. Danielson manages the Psycho Knee then sets Trent up for a Gotch Style Piledriver. He’s not done yet, he stomps Trents head before locking in the Lebell Lock for the win.

Hook backstage interview: Hook is silent eating chips with his headphones on. Danhausen is hiding in the trash can with another curse but it’s irrelevant. Hook throws his chips away in the trashcan and Danhausen proceeds to eat the chips and then suggests that they might be where Hook gets his powers from. Too short to rate but we must be working towards Danhausen vs Hook in the ring at some point here.

BELOW AVERAGE Scorpio Sky Dan Lambert and Ethan Page in ring promo: Sky is shortly interrupted by Sammy Guevara and Tay Conti. The crowd are not having Sammy and Tay as they are being pretty badly booed by the people in Boston. Dan, Tay and Sammy go back and forth, which is where we really see this particular crowd’s allegiance. They aren’t on anyone’s side, and don’t like this segment at all. When Ethan Page finally raises his voice at Tay and Sammy the crowd firmly backs him up. Sammy wants a match and he tells him that until he gets that match he and Tay are going to make their lives miserable every week.

GOOD Swerve Strickland vs. QT Marshall: The fans love Swerve, he has always been over but this seems to be another level. The way he’s carved out his space on Rampage has been refreshing. While this match is predictably one sided, QT Marshall can actually go a bit in the ring. Swerve is all over Marshall and lands a Back Heel Kick to the back of QT’s head for the win. This was a fun match to re-establish Swerve’s Friday night dominance. Ricky Starks interrupts the celebration and calls for a tag team match next week on Dynamite. It’ll be Starks and Powerhouse Hobbs against Keith Lee and Swerve Strickland!

Result: Swerve Strickland by pinfall via Back Heel Kick

GOOD Red Velvet vs. Willow Nightingale Owen Hart Foundation Women’s Tournament qualifying: Willow earned her spot in this match last week after her standout performance at ROH Supercard. Red Velvet is being tossed around the ring by the stronger Nightingale in this one but she manages to briefly take over with some stomps in the corner. Willow is being backed by the crowd and she lands a spinebuster for a close 2 count. Nightingale lands the Pounce and pounds the mat before following up with a cannonball senton for a near fall. Red Velvet is showing her resilience here too. Willow is smashed with a corkscrew kick and that is the end of that. Red Velvet pulls the victory and the crowd is not happy about it.

Tony Nese backstage interview: Nese is angry about not getting enough attention then he is interrupted by Smart Mark Sterling. Smart Mark lets Nese know that he agrees with him and asks him to take a walk and discuss working together. Too Short to rate.

Amazing: Wheeler Yuta vs. Jon Moxley: Yuta enters followed by Mox to a huge reception. Before Moxley can make it to the ring Yuta dives over the turnbuckle and ambushes Moxley into the crowd. Wheeler is all over Moxley as they finally make it into the ring to officially start the match. As the bell rings Mox grabs a german suplex and takes over briefly. They go back and forth in the center of the ring and this is going to be an incredibly stiff match. Yuta is busted wide open as we head to our first commercial. During the break Moxley and Yuta slug it out on the outside in a match that has turned incredibly bloody. Wheeler is totally game and continues to battle back every time it seems Moxley is going to take over. Yuta is covered in blood but he is on a roll now with only 7 minutes of television time remaining. Moxley drills a king kong lariat that grounds the blood-stained underdog and the fans are loving this. Yuta kicks out of a Paradigm Shift and now the crowd is really going insane, chanting his name. Mox grabs onto a bulldog choke and Yuta’s blood is drenching Moxley’s arm. It’s too slippery so he loses the hold, and Wheeler grabs onto a bulldog choke of his own. Mox battles to his feet and Yuta transitions to a rear naked choke. Moxley counters and smashes him with a higher angle Paradigm Shift, which Yuta kicks out of again! Jon quickly latches onto a rear naked choke and this time Yuta actually goes to sleep. Moxley wins but he looks astonished by Wheeler Yuta, he can’t believe how much heart that kid has. Danielson and Regal make their way to the ring and they surround Yuta. Lord Regal extends his hand to Wheeler in the ultimate sign of respect as the show ends. This was an outstanding match, and a really cool way to advance Yuta’s status in the eyes of the fans.

Overall: This was a really fun Rampage, with an especially fun main event. Dynamite was always going to be difficult to follow considering the effort the Bucks and FTR put forth in the main event of that show. Wheeler Yuta and Jon Moxley did their part in a wildly entertaining match. Yuta showed he can hang with the big dogs and Moxley looked incredible as well. It will be interesting to see if it creates further bad blood between Yuta and the Best Friends. Speaking of the Blackpool Combat Club, Bryan Danielson picked up another win himself this week. Red Velvet qualified for the Owen Hart Foundation Women’s Tournament. Oh yeah, next week on Dynamite it will be Ricky Starks and Powerhouse Hobbs against Swerve Strickland and Keith Lee in Tag Team action!